Twitter is finally allowing a number of locked users to regain control of their accounts once again. Around a  year after Europe’s new privacy laws (GDPR) rolled out, Twitter began booting users out of their accounts if it suspected the account’s owner was underage — that is, younger than 13. But the process also locked out many users who said they were now old enough to use Twitter’s service legally.

While Twitter’s rules had stated that users under 13 can’t create accounts or post tweets, many underage users did so anyway thanks to lax enforcement of the policy. The GDPR regulations, however, forced Twitter to address the issue.

But even if the Twitter users were old enough to use the service when the regulations went into effect in May 2018, Twitter still had to figure out a technical solution to delete all the content published to its platform when those users were underage.

There have been questions and concerns about accounts being locked because of age restrictions. We wanted to let you know what happened here, and what we’re doing about it. 1/6

The lock-out approach was an aggressive way to deal with the problem.

By comparison, another app favored by underage users, TikTok, was recently fined by the FTC for being in violation of U.S. children’s privacy law, COPPA. But instead of kicking out all its underage users for months on end, it forced an age gate to appear in the app after it deleted all the videos made by underage users. Those users who were still under 13 were then redirected to a new COPPA-compliant experience.

Although Twitter was forced to address the problem because of the new regulations, lest it face possible fines, the company seemingly didn’t prioritize a fix. For example, VentureBeat reported how Twitter emailed users in June 2018 saying they’d be in touch with an update about the problem soon, but no update ever arrived.

The hashtag #TwitterLockOut became a common occurrence on Twitter and cries of “Give us back our accounts!” would be found in the Replies whenever Twitter shared other product news on its official accounts. (Well, that and requests for an Edit button, of course.)

Twitter says that it’s now beginning — no, for real this time! — to give the locked out users control of their accounts. The process will roll out in waves as it scales up, with those who have waited the longest getting their emails first.

It also claims the process “was a lot more complicated” than anticipated, which is why it took a year (or in some cases, more than a year) to complete.

Starting today, we'll email those eligible with details on how to unlock your account. Emails will be sent in waves, so don’t worry if you don’t hear from us right away. No email? Log in to your account and look for a Get Started button. You'll have 30 days to finish the process.

Typically, being eligible means you must meet our minimum age requirement and your account must not be locked for other reasons, such as for violating Twitter Rules.

We're rolling out in waves so our system can handle it. When it's your turn, you’ll get an email. Or, if you log in to your account, you’ll see a “Get Started” button when it’s your turn. Thanks for your patience!

However, there are some caveats.

The users will first need to give Twitter permission to delete any tweets posted before they were 13, as well as any likes, DMs sent or received, moments, lists and collections. Twitter will also need to remove all profile information besides the account’s username and date of birth.

In other words, the company is offering users a way to reclaim their username but none of their content.

Though many of these users have since moved on to new Twitter accounts, they may still want to reclaim their old username if it was a good one. In addition, their follower/following counts will return to normal after up to 24 hours after they take control of their account once again. 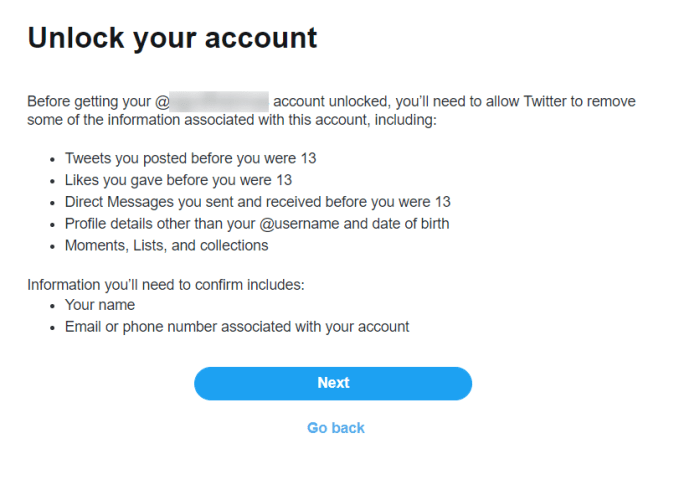 Twitter says it’s beginning to email details to those who are eligible, starting today. If the user doesn’t have an email address, they can instead log into the account where they’ll see a “Get Started” button to kick off the process instead.

To proceed, users will have to confirm their name and either the email or phone number that was associated with the account.

The account isn’t immediately unlocked after the steps are completed, users report. But Twitter’s dialog box informs the users they’ll be notified when the process is finalized on Twitter’s side.

Hopefully, that won’t take another year.

Image credits (of the process): Reddit user nyuszika7h, via r/Twitter