Spotify has launched a more slimmed-down version of its streaming music app in India, only months after its public debut in the country. The Android-only app, Spotify Lite, is only 11 MB in size compared with 30 MB for the main app — a change that’s common to apps targeting emerging markets where bandwidth and storage space are concerns.

The company had already tested Spotify Lite in other areas, including Indonesia, Philippines, Malaysia, Mexico, Brazil and others. The app has a similar look as the main app, and offers the same key features in terms of being able to play music on demand, discover new music you might like and save songs for offline listening. However, it also lets you keep track of your mobile data by showing you how much you’ve consumed during the month, and set a monthly limit for Spotify Lite’s use of that data.

The app can be used as an alternative or alongside the main Spotify app, depending on users’ needs. 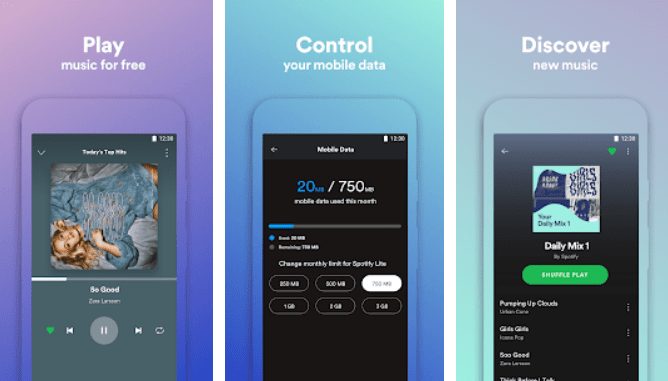 The first version of Spotify Lite launched in Brazil in June 2018, so it’s still a relatively new app. Today, the app is publicly available in 22 countries, including, now, India. It has around 2.1 million installs, according to data from Sensor Tower. India has only produced a few thousand downloads for Spotify Lite so far, as it’s just gone live.

That said, India will be a key market for Spotify Lite going forward, given the heated competition for streaming music services in a region where millions of internet users are coming online for the first time. Already, Apple, Amazon and Google are running their own music services in India, where they face competition from local players Gaana, JioSaavn and others. Catering to the unique needs of the Indian market’s user base will help Spotify better compete with these rivals.

The news of Spotify Lite’s Indian launch was first reported by a newswire report featured on news site The News Minute. The report quoted Amarjit Batra, managing director for Spotify India, as saying the Lite app was a big step toward better localization of Spotify’s service as it “enables users to play millions of songs for free, takes up less space on phones, and saves data when used on the go.”

Reached for comment, Spotify confirmed the launch to TechCrunch, but referred to it as a test and noted its “beta” labeling.

“At Spotify, we routinely conduct a number of tests, including the Spotify Lite Beta, in an effort to improve our user experience,” a Spotify spokesperson said. “Some of those tests end up paving the path for our broader user experience and others serve only as an important learning. We aren’t going to comment on specific tests at this time,” they added.