At long last, it’s lift-off for Uber. After pricing its initial public offering at $45 per share, at the bottom end of the range it set previously, to raise $8.1 billion, the transportation startup began trading today on the New York Stock Exchange, and the shares opened at $42, down from the IPO price.

Ahead of Uber finally making its debut, the company had an indication price that went as low as $42 ahead of live trading. With the overall market in a slump this week over trade woes with China, it’s a challenging time to list, to say the least.

Uber had raised $28.5 billion as a private company from no less than 166 different backers, with its last valuation in the region of $75 billion. The $82.4 billion valuation that it finally settled on for the IPO (selling 180 million shares at $45/share) is definitely up from that, but far from the lofty projections of $120 billion that banks and analysts that floated in the months leading up to today.

The figures nevertheless cement Uber, alongside Alibaba and Facebook, as one of the most valuable tech IPOs in history, and a major beacon for breaking ground in a new area of tech, transportation.

But if it is the sheer scale and potential of Uber that catapulted it to such financial heights (real and imaginary), it’s the bare financials that have tempered some of those notions.

On one side, Uber essentially created and currently dominates the market for on-demand transportation, which started with the premise of connecting drivers with passengers by way of an app that tracked the location of both, but eventually evolved into a wider two-sided marketplace ambition that brings together different modes of transportation — including bikes, public buses and more — with human passengers, as well as the movement of other goods like food, all on a global scale.

That model has propelled Uber to 93 million active platform consumers (from 70 million a year ago) and 17 million trips per day across 700 cities on six continents, along with a lot of high hopes from others like PayPal — which are making very late-stage, strategic investments to bank on what it believes could shape up to be a lucrative e-commerce empire in the years to come.

But Uber’s prospects are not without competition — which includes a host of more regional players like Lyft, Gett, Heetch, MyTaxi, Bolt and more — and not without controversy. Even as it goes public, the company is dealing with high-profile driver protests, lawsuits and ongoing regulatory pressures, not to mention a bigger cloud over its business practices that has hovered for years that the company has worked to dispel.

Even today, during the iconic bell ringing, there was a notable absence: former CEO and co-founder Travis Kalanick, who was ousted over the controversies around business practices but still sits on the board, was not up there — although he did show up at the NYSE for the event.

$UBER The Uber drama Continues: Travis Kalanick — who built @Uber in his image and still sits on the board with an 8.6% stake in the company after being ousted almost two years ago — was not on the balcony to ring the Opening… https://t.co/aUKNKSkFd2 pic.twitter.com/R1h6kOli3d

Outside, meanwhile, protesters against the company were also making their voices heard. 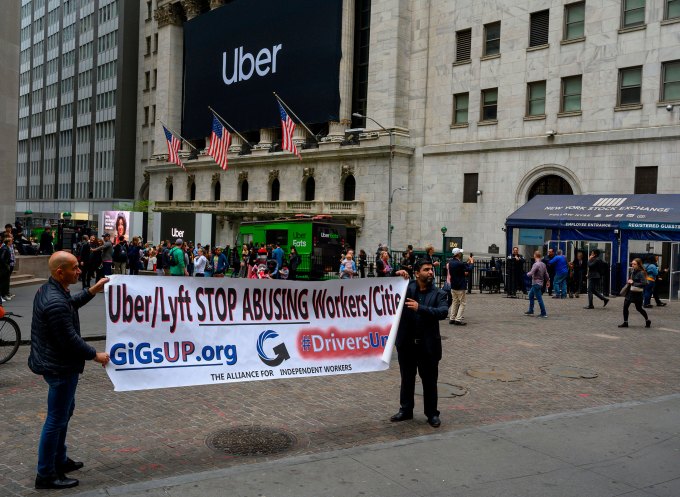 Two drivers hold up a protest sign as the Uber banner hangs on the front of the New York Stock Exchange May 10, 2019 in New York. – Uber is set for its Wall Street debut Friday with a massive share offering that is a milestone for the ride-hailing industry, but which comes with simmering concerns about its business model. Shares will be priced at $45 for the initial public offering (IPO). (Photo: DON EMMERT/AFP/Getty Images)

On the pure metric of profit and loss, Uber’s been firmly in the latter column, most recently posting a loss of some $1 billion in the last quarter on revenues of $3 billion-$3.1 billion, versus $2.6 billion a year ago.

Today’s listing is a small pause on the bigger question of how and if Uber will ever turn that boat around. It has made some significant shifts, such as divesting certain regional assets and reducing some of the incentive payments and discounts it made to drivers around the world to lure them to its platform; and under current CEO Dara Khosrowshahi, it has made a concerted effort to play nice on a number of fronts. Khosrowshahi acknowledged the new set of challenges that staff would be facing as of today in a memo he sent out this morning:

As we move from a private to a public company, our jobs will no doubt become harder and all eyes will be on us. We’ll have an even deeper responsibility to our customers, to our shareholders, to our cities, and to each other. With every share purchased, someone else will join us as a co-owner of Uber — and we’ll gain another person to whom we owe a duty to always ‘do the right thing, period.’

Remember: while the public markets will keep their version of the ‘score’ and the value of what we build, our true north will be determined over the long term. We will go through periods when we will be misunderstood, as well as periods when we will be hailed as heroes. It’s during those days, regardless of the ups and downs, that we should focus on our work: on creating opportunity, on moving the world, and relentlessly innovating and executing.

But the big question will still remain of whether all these changes and the recast approach will be enough, and whether — now that it’s listed — public investors will be patient enough. At least in the short term, the performance of its smaller rival, Lyft, which largely operates on similar metrics and business model to Uber, might give some pause: it is currently trading at around $55, well below its debut of $78.29 on March 29.