Uber, WeWork and Slack’s IPOs are poised to pay out for SoftBank’s Vision Fund, but already the megafund is claiming impressive results. At SoftBank Corp.’s annual shareholder meeting, chairman Masayoshi Son revealed return rates for LPs for the first time: and the fund’s value is up 45%.

The Vision Fund is fascinating for many reasons — not to mention its insane $100 billion size — and Son detailed that LPs in the fund cover two different bands. One set has a fixed distribution of 7% through preferred equity, which covers $40 billion. The remaining $58.6 billion of regular equity pays out based on fund (portfolio) performance which, Son revealed, is at 45% (after fees) two years into the Vision Fund’s life.

“Some people criticized [us, saying:] ‘You have been too aggressive and you can’t deliver good results by just investing so much,’ but we show this result,” Son said in comments that were translated into English for an online broadcast of his speech to shareholders.

Son pointed out that even a blended return, which includes the 7% fixed payout, stands at 29%. 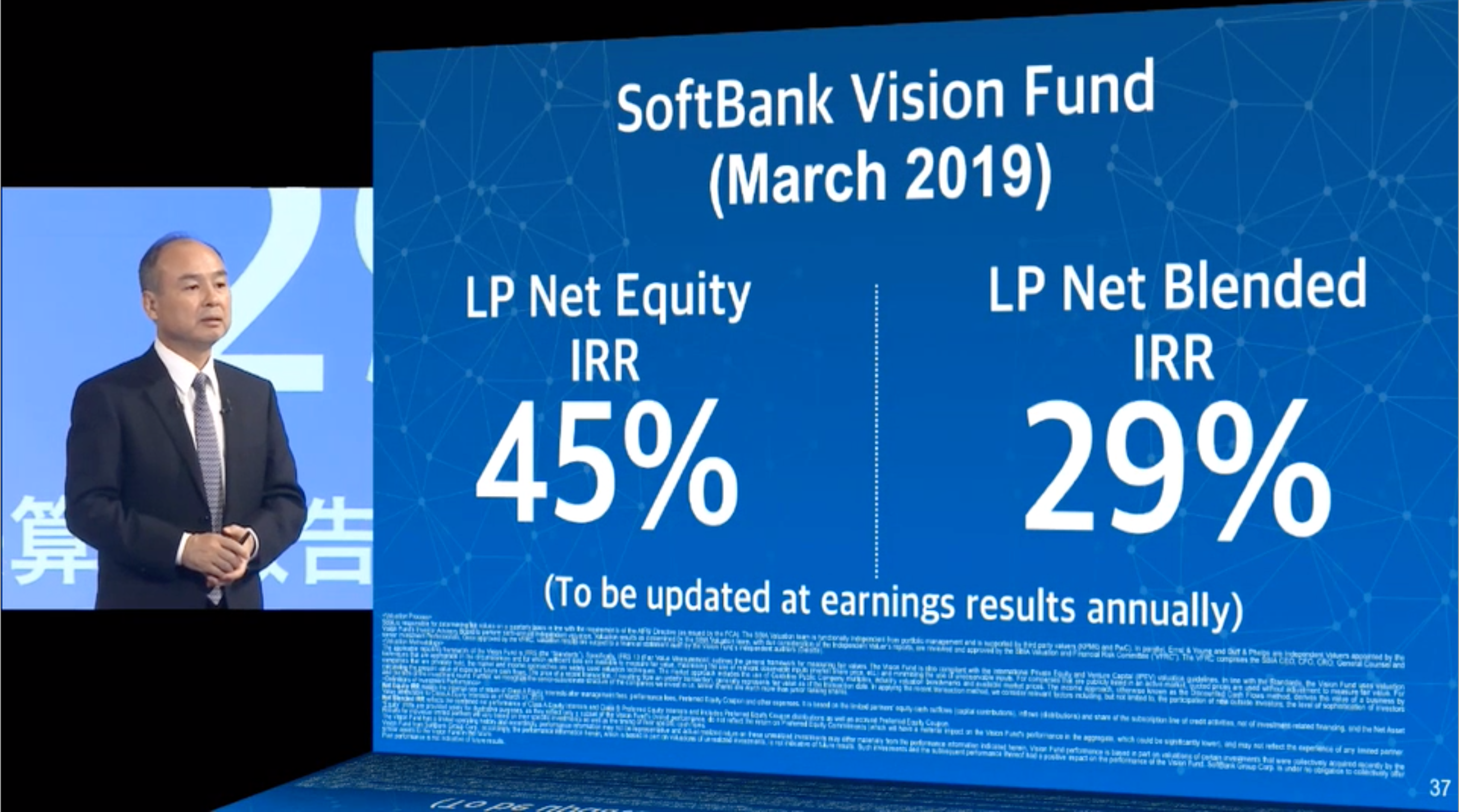 In contrast to the conventional secrecy of VC firms, SoftBank President Masayoshi Son is opening the books on the Vision Fund’s performance

The SoftBank supremo claimed many underestimate how involved the parent company is in the fund — a lot of light is shone on Saudi investor PIF and particularly its link to the murder of journalist Jamal Khashoggi, an outspoken critic of the regime — but he pointed out that SoftBank Corp. represents 48% of the regular equity in the fund and is thus in line for a large share of the spoils.

SoftBank’s paper-based return from the fund reached 62% IRR, which even Son himself admitted is a lofty target that the Vision Fund will struggle to maintain. SoftBank’s IRR was 44% during Son’s 18-year tenure leading the business, which he said makes him bullish for the future.

“I don’t like number two. From my personality perspective, I can’t accept number two, I need to be number one. I’ve been like that since I was a kid,” he said — again via a translator — of SoftBank’s goal to assemble a group of “global champions” in the Vision Fund. 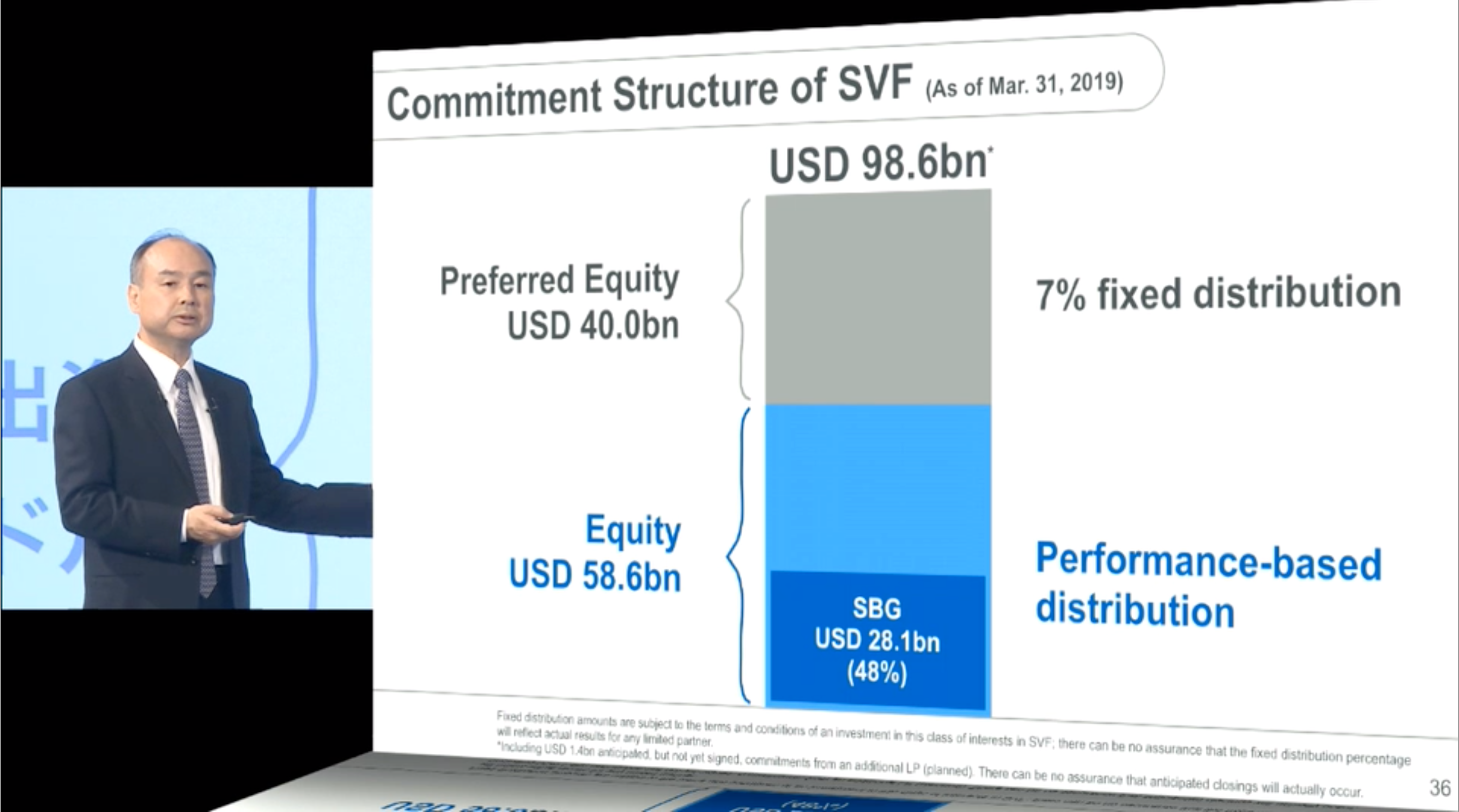 SoftBank Corp. (SBG in the chart above) stands to gain significantly if and when the Vision Fund can convert paper gains into returned capital

The Vision Fund has collected 82 investments to date, and SoftBank’s earnings show that two exits in the year were Flipkart, which sold to Walmart for $16 billion last year, and Nvidia, after the Vision Fund dumped its entire stake in February following a downturn in its share price. SoftBank generated income of ¥146.7 billion and ¥138.3 billion, respectively, from those deals. That’s a combined ¥306.8 billion, including derivative gain, or around $2.8 billion.

However, SoftBank mostly relies on “unrealized gains” on investments (like Uber, OYO and others) for its impressive numbers — in other words, how much the value of its stake in these companies has increased as they raise more capital and increase their valuations. These are, of course, paper gains until they pay out via acquisition or — what is most likely the goal for the Vision Fund — IPO. Indeed, the Vision Fund itself is reportedly planning a listing of its own.

That’s a major caveat for the IRR numbers that SoftBank claimed, as the majority of its investments haven’t exited for hard cash at this point. The fact that these assets have increased in value suggests that, as and when they do, the payouts will be handsome, but getting them liquidated is, as most VCs will tell you, the hard part.

Ping An Health and Guardant Health — two of its less prominent investments — went public last year in Hong Kong and the U.S., respectively, but it is still early days for the rest of the Vision Fund herd. That said, over the coming weeks, we’ll see the results of SoftBank’s prominent bets as Uber, WeWork and Slack head to the public markets, and that’ll give a clearer indication of the progress and value for LPs.

Already, the Vision Fund is tipped to make a $3 billion paper gain from Uber’s IPO on an investment made at the end of 2017 — the fund is Uber’s largest shareholder — but how much it realizes will depend on what it sells at the bell, what it holds and how Uber’s share price develops.

In sticking with his unconventional approach to venture capital, Son is promising to provide an annual update. That’s a long time to wait and there are sure to be more explosive developments over the next 12 months, particularly as SoftBank is increasing its deal volume per quarter.