In addition to preserving art and historic landmarks around the world, Google’s Arts & Culture division also likes to collaborate with artists to experiment with integrations between technology and art. The latest of these efforts, a new AR app called “Weird Cuts,” was formally introduced this evening at the Google I/O developer conference. The concept for the app was created by artists Zach Lieberman and Molmol Kuo, and was developed with the support of Google Arts & Culture. And it’s definitely an odd (but also fun) tool for playing around with augmented reality — without having any sort of real intention in mind beyond “making weird AR collages.”

Experiments like this, though seemingly lighthearted, are important in terms of getting a better understanding of a new technology, and how people want to interact with it. Today, many AR apps are built for specific purposes — like placing furniture in a room to see how it goes with your existing décor, or getting up-and-close with something you normally couldn’t otherwise — like the great, white shark shown in AR during yesterday’s Google I/O keynote.

Weird Cuts, meanwhile, doesn’t have any higher aim beyond just having fun and being creative. 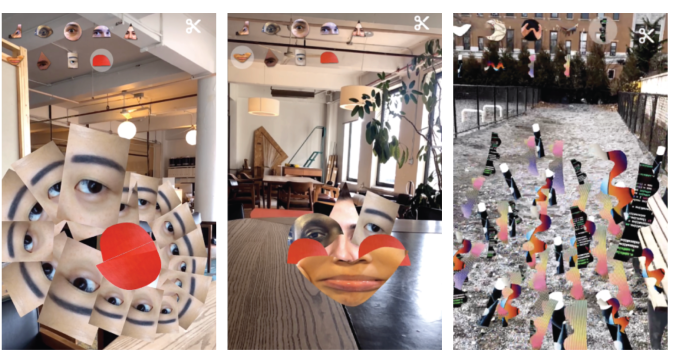 The app consists of two modes — a cutout mode and a collage mode.

The idea is that you should walk around and collect a bunch of different materials from the world in front of your camera’s viewfinder while in the cutout mode. These images are cut into shapes that you then assemble when you switch to collage mode. To do so, you’ll arrange your cutouts in the 3D space by moving and tapping on the phone’s screen.

You can also adjust the shapes while holding down your finger and moving up, down, left and right — for example, if you want to rotate and scale your “weird cuts” collage shapes.

The end result is a sort of multi-dimensional work of “art” (or perhaps, bit of nonsense, depending on your skill level) created with the found objects and your own improvisational efforts.

The new app, which is published by the artists but credits Google Arts & Culture, is a free download on Google Play.