RedCircle has created a web-based podcast player of its own, but CEO Michael Kadin (previously an engineering manager at Uber) said the mission isn’t to compete with other podcast apps. Instead the team aims to create the tools podcasters need to build a real business.

In fact, RedCircle is already offering some of those tools — like hosting and analytics — for free, and it also launched a cross-promotion marketplace where those podcasters can team up to try to grow each others’ audiences.

As for the new tipping feature, it appears as a button on the RedCircle player, allowing users to pay $2, $5 or a custom amount with just a few clicks (you’ll also need to enter your credit card info, of course). The startup can also automatically insert a tipping link into a podcast’s show notes, so listeners will find out about it regardless of the player they use. 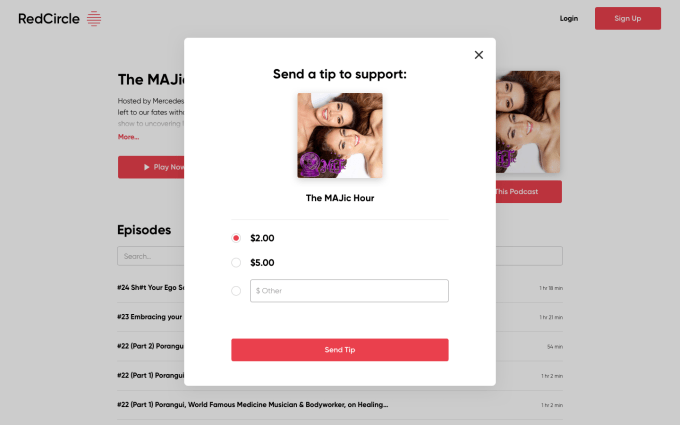 Co-founder Jeremy Lermitte (a former Uber product manager) added that tipping provides a way for fans to compensate a podcaster for an episode they particularly enjoyed without making the long-term commitment of, say, signing up for a Patreon subscription.

“This allows you to engage at your own pace,” Lermitte said.

Podcasters can and do accept one-time payments via PayPal or Venmo, but Kadin said RedCircle offers more data about who’s making the payments, while also providing a 1099 form for taxes and “all the other things you want to turn this into a real thing, versus something casual.”

“The first thing podcasters say they need is to grow their audience,” he added. “The second thing is to make money from it. Now we’re working on both of those problems. Just give us another week and a half and we’ll make even more progress.”

RedCircle has raised a $1.5 million seed round led by Roy Bahat at Bloomberg Beta.