After Square issued weak guidance in Q4, all eyes were on the payments company to see what kind of growth it really had in Q1. Results reported today underscored some of the challenges the company is facing.

But on the other hand, the figures were also a signal of a continued slowdown: in the last quarter, Square’s revenues of $464 million represented a rise of 64%. It also posted a widening net loss of $38 million, versus $28 million last quarter and $24 million a year ago. (It noted that its “mark-to-market valuation of our Eventbrite investment” accounted for $14 million of that loss.) And gross payment volume of $22.6 billion was up 27% on last year, but it was a decline on the previous quarter.

And to add to the challenges, Square’s guidance for the next quarter speaks of a continuing decline. Square said that it expects full revenues to be between $1.09 billion and $1.11 billion, with adjusted revenues of $545 million — $555 million up only 43% on a year ago. Adjusted EPS it expects to be between $0.14 and $0.16, but with an ongoing net loss. Full-year earnings were adjusted up slightly over previous guidance from the company.

Square’s stock is currently down 6.4% in after-hours trading. It currently has a market cap of some $31 billion.

Since going public in November 2015, the company has seen strong growth and has generally beaten expectations. But Square has reported a net loss for four of the last five quarters, and so any kind of slowdown in growth poses a challenge for turning that around. 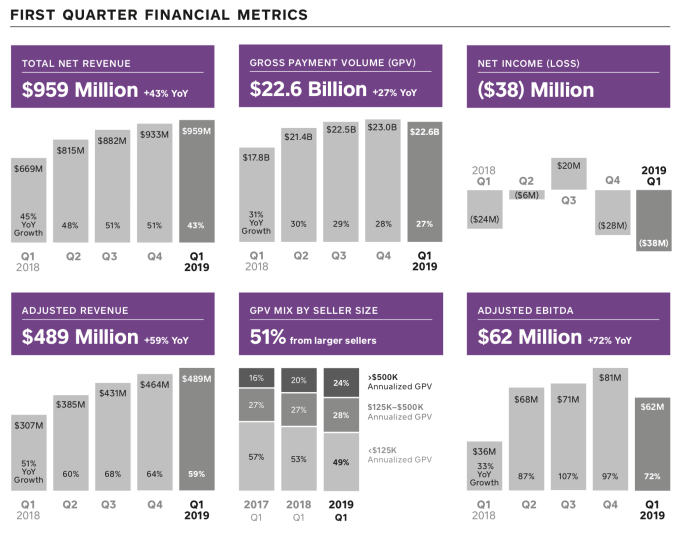 Square continued to grow business operations like Square Cash — its instant money transfer service — and its core payments business (subscription and services revenue). The latter was up 126% to $219 million, led by growth of the Square Cash app, Caviar, Square Capital and Instant Deposit for sellers. Square noted that in the first quarter of 2019, Square Capital facilitated approximately 70,000 loans worth $508 million, up 50% year over year.

But in the last quarter the company started to make some moves into one of the newer areas of fintech, cryptocurrencies, with CEO Jack Dorsey announcing that it was hiring engineers to work on open-source contributions to the crypto and bitcoin ecosystems, its first effort to do so “independent of its business objectives.”

I’ll be listening into the earnings call and will update this post with anything interesting that comes out of it.