LG was once a stalwart of the smartphone industry — remember its collaboration with Facebook back in the day? — but today the company is swiftly descending into irrelevance.

The latest proof is LG’s Q1 financials, released this week, which show that its mobile division grossed just KRW 1.51 trillion ($1.34 billion) in sales for the quarter. That’s down 30% year-on-year and the lowest income for LG Mobile for at least the last eight years. We searched back eight years to Q1 2011 — before that LG was hit and miss with releasing specific financial figures for its divisions.

Regular readers will be aware that LG mobile is a loss-making division. That’s the reason its activities — and consequently sales — have scaled down in recent years. But the losses are still coming. 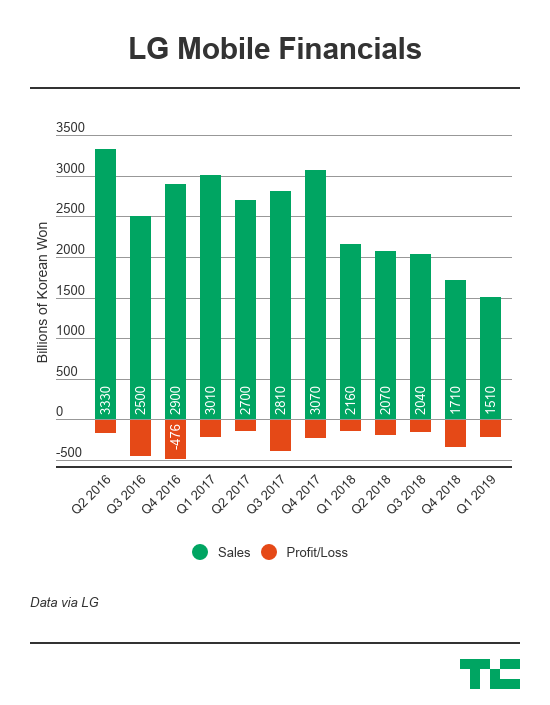 LG put Brian Kwon, who leads its lucrative Home Entertainment business, in charge of its mobile division last November and his task remains ongoing, it appears.

LG said Mr. Kwon is presiding over “a revised smartphone launch strategy,” which is why the numbers are changing so drastically. Going forward, it said that the launch of its G7 ThinQ flagship phone and a new upgrade center — first announced last year — are in the immediate pipeline, but it is hard to see how any of this will reverse the downward trend.

LG Mobile is increasingly problematic because the parent company is seeing success in other areas, but that’s being countered by a poor-performing smartphone business. Last quarter, mobile dragged LG to its first quarterly loss in two years, for example.

Just looking at the Q1 numbers, LG’s overall profit was 900.6 billion KRW ($801.25 million) thanks to its home appliance business ($647.3 million profit) and that home entertainment business, which had a profit of $308.27 million. Its automotive business — which is, among other things, focused on EVs — did bite into the profits, but that is at least a business that is going places.