The Audi RS 5 Sportback is an animal. Tamed, sure, but not domesticated. It’s important to remember as one day, maybe next week or next year, or both, the RS 5 will revert to its natural state and become fervid, wild and unforgiving.

Although the RS 5 sedan shares a similar look to the everyday Audi A5 and S5, the RS 5 is a different animal altogether. At a moment’s notice it can go from a Home Depot hauler to a street brawler. Even in its most mild form, the RS 5 feels like a cat ready to pounce, but click a few settings and the cat turns feral.

This five-door sedan is raw and unhinged, and there’s an unnatural brutality under the numerous electronic systems. Its twin-turbo 2.9L power plant roars while the Audi all-wheel drive system keeps the rubber on the tarmac. It’s insane, and like most vacations, it’s lovely to visit, but I wouldn’t want to live with the RS 5. 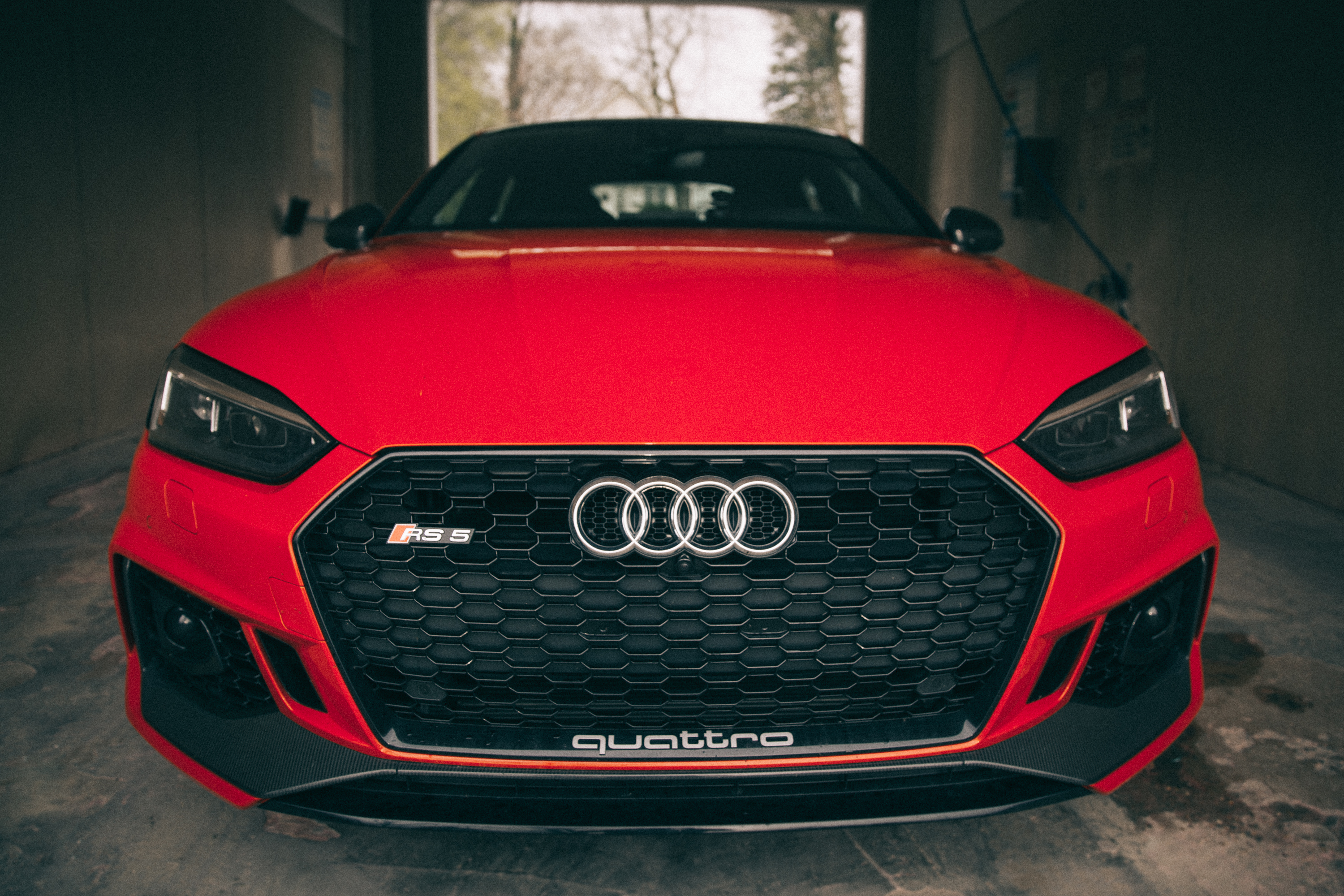 After a long, cold winter, it’s finally nice here in Michigan; leaves are peeking out and the grass is turning green. The severe winter left Michigan’s crumbling roads in a state of disrepair. There are potholes the size of bathtubs and this Audi is equipped with rubber bands for tires. This became problematic during my time with the vehicle.

The RS 5 is Audi’s ultimate version of a midsize sports sedan. The tester I’m driving costs $99,990 and is outfitted with every option available, including ceramic front brakes.

Like most modern sports cars, the RS 5 has a bevy of driver-selectable options. Everything is adjustable, from the seats to the throttle response to the exhaust note. The RS 5 is a track superstar, and the adjustable options reflect that pedigree. Options are adjustable from intense to hardcore. Clicking from the so-called comfort setting to dynamic is like going from a 10 to a 12. Want even more? Click the transmission to sport, and the car turns from feral to rabid.

Driving the RS 5 is an exercise in restraint. The car leaps off the line with intoxicating enthusiasm. The shifts drop into place with German precision, encouraging the driver to go faster and faster. The RS 5 isn’t a commuter car. This isn’t a car that should be relegated to a life of driving to and from an office park. The RS 5 is built for the weekend racer and never lets you forget it.

The RS 5 offers impressive driving dynamics thanks mostly to the twin-turbo power and quick transmission. Engage the transmission’s sport mode and it seems to read the driver’s mind. It feels like there’s a camera looking at the road ahead telling the transmission that at any moment the driver will want to click down three gears to pass a meandering crossover. And then, when called upon, the RS 5 is ready to overtake, slamming the occupants into the quilted leather seats.

It doesn’t matter if the RS 5 is shooting off the line or going 70 down an expressway; when the driver mashes the accelerator to the floor, heads snap backward.

Driving the Audi RS 5 is like using a cheat code. The all-wheel drive system and instantaneous shifts can make anyone feel like a professional driver. To be clear, there are faster and quicker cars than the RS 5. I’ve been in those cars. The RS 5 is different in an old-fashioned way, as few new cars feel as raw as the RS 5. The way it lays down its rather modest amount of power results in its nervous smile.

The RS 5 is a car with an old soul. Hidden under the modern German engineering is a vehicle wanting to break free of the electronic restraints. The RS 5 doesn’t want the advanced traction control or adjustable exhaust note. It wants to spend every Saturday morning at the track burning through another set of its low-profit tires. This car feels like a sports car from an era when it took skill to stay on the track.

The RS 5 feels as quick as the fastest electric sedans, though by the numbers it’s slower. Audi pegs the RS 5 with a 0-60 time of 3.8 seconds. Some electric counterparts can best that time by more than a second. Audi’s use of a twin-turbo on an ingenious V6 engine enables the RS 5 to launch with the best of them though it will quickly fall behind as the speed climbs.

The ride quality is adjustable, but always harsh. The RS 5 rides like a work truck in its comfort setting. In dynamic, it feels like a farm tractor. This stiff ride helps the RS 5 stay planted, but it cannot ever be described as comfortable or enjoyable. Sure, the RS 5 can throw its occupants sideways while taking an expressway ramp at 70 mph; it also feels like it will shake itself apart while cruising down a side street.

The RS 5 shares the same proportions as Audi’s entry-level A5. It’s a midsize car that feels bigger than it should. The RS 5, like its A5 and S5 siblings, is comfortable and roomy for a vehicle of its size. There is plenty of room in the front, while it’s a bit tight in the back for a couple of adults. 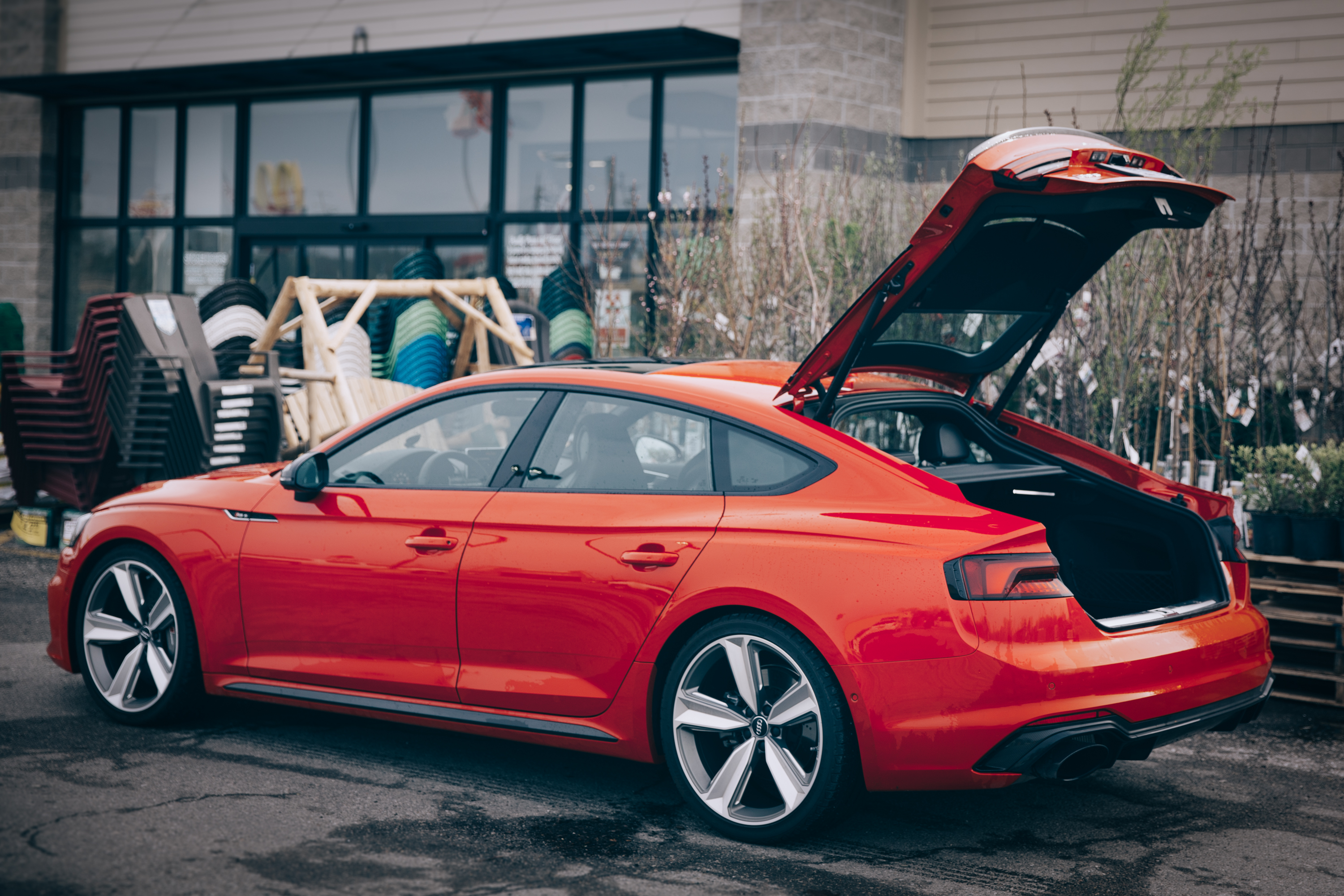 The one I’m driving is the Sportback trim. It features a sort of rear door that opens like a hatchback without sporting the trademark hump. It’s similar to that found on Audi’s fantastic A7/S7 series. The configuration gives the operator more convenient access to the rear storage while retaining the look of a sedan. I like it.

The infotainment system inside the 2019 RS 5 is of the same design Audi has used for years. It’s old, but aging nicely. Everything is controlled by a large knob located by the shifter. It’s still one of the best user interfaces available, though several 2019 Audi vehicles are equipped with a brand-new system that’s quicker and even easier to use thanks to a touchscreen with haptic feedback.

Besides a few choice details and carbon fiber trim, the inside of the RS 5 is unremarkable and rather pedestrian. That’s fine with me. Above all, the cabin is usable and comfortable. RS 5 buyers are not looking for luxury appointments. They’re here for the speed, and on that, the RS 5 delivers.

The RS 5 is proof we’re living in the golden age of internal combustion engines. The twin-turbo 2.9L engine is brilliant. While cruising around town, the power plant is easy-going and agreeable. In stop and go traffic, the turbos are restrained and slow to spin up.

What I’m saying is the RS 5 is properly tuned and will only snap necks if instructed to do so.

I came for the performance but stayed for the noise.

The RS 5 is loud. I love it, and my kids love it. I’m sure my neighbors will be glad when this tester goes home. The RS 5 has the performance chops of the fastest electric sedan, but the exhaust is a constant loud reminder that it burns fossil fuel. The exhaust roars while the turbos scream. In comfort mode, the exhaust is mechanically subdued, and yet it still growls. In dynamic, it sounds like an angry dragon as it spits, grumbles and roars an explosive warning to everyone in a three-block radius.

There are a few competitors to the RS 5, but only the BMW M5 matters. The M5 is the classic sports sedan with a pedigree that spans generations. Between the two sedans, the performance is similar, though by most accounts, the BMW is quicker to 60 mph by a half a second. The BMW uses a 600 horsepower 4.4L twin-turbo V8 while the Audi taps a twin-turbo V6 that outputs 444 horsepower. A BMW M5 starts around $100,000 and can easily reach well north of that. The $74,00 Audi RS 5 starts closer to the sticker of the smaller BMW M3. The fully loaded example I’m driving costs $99,990.

The pricing between the Audi RS 5 and M5 only tells part of the story, and shoppers should spend time in both vehicles to understand the differences. Some might get drunk on the RS 5’s raw power, while others could be sold on the M5’s refined performance and superior ride quality. If it were me, I would opt for the RS 5 and dump the difference in cost into a savings account to pay for speeding tickets.

To be clear, the RS 5 is not a grand tourer or a grocery getter. It’s an intense performance vehicle. For the right person, it will give countless thrills and endless smiles. During my time with the RS 5, I found myself continually egging the vehicle a bit faster and louder. The noise is addicting, but the ride is back-breaking.

The ride quality is intense and could be a deal breaker for some people. It’s rough and unforgiving and tuned for performance. The RS 5 is not for people with back problems or those that need a zippy commuter. For those, look at the much-less-expensive but still impressive Audi S5.

The RS 5 deserves a life on a track or open road. This sedan is a bottomless pit of power and thrills. The RS 5 is invigorating, a bit backbreaking but ultimately unforgettable.

Review: A week in an Audi R8 Spyder, an everyday supercar