TechCrunch’s Connie Loizos published some interesting stats on seed and Series A financings this week, courtesy of data collected by Wing Venture Capital. In short, seed is the new Series A and Series A is the new Series B. Sure, we’ve been saying that for a while, but Wing has some clean data to back up those claims.

Years ago, a Series A round was roughly $5 million and a startup at that stage wasn’t expected to be generating revenue just yet, something typically expected upon raising a Series B. Now, those rounds have swelled to $15 million, according to deal data from the top 21 VC firms. And VCs are expecting the startups to be making money off their customers.

“Again, for the old gangsters of the industry, that’s a big shift from 2010, when just 15 percent of seed-stage companies that raised Series A rounds were already making some money,” Connie writes.

Now on to IPO updates, then a closer look at all the companies raising big rounds. Want more TechCrunch newsletters? Sign up here. Contact me at kate.clark@techcrunch.com or @KateClarkTweets.

Slack: The workplace communication software provider dropped its S-1 on Friday ahead of a direct listing. That’s when companies sell existing shares directly to the market, allowing them to skip the roadshow and minimize the astronomical fees typically associated with an initial public offering. Here’s the TLDR on financials: Slack reported revenues of $400.6 million in the fiscal year ending January 31, 2019, on losses of $138.9 million. That’s compared to a loss of $140.1 million on revenue of $220.5 million for the year before. Slack’s losses are shrinking (slowly), while its revenues expand (quickly). It’s not profitable yet, but is that surprising?

Zoom was the Slack we thought Slack was all along.

Uber: The ride-hail giant is fast approaching its IPO, expected as soon as next week. On Friday, the company established an IPO price range of $44 to $50 per share to raise between $7.9 billion and $9 billion at a valuation of approximately $84 billion, significantly lower than the $100 billion previously reported estimations. The most likely outcome is Uber will price above range and all the latest estimates will be way off course. Best to sit back and see how Uber plays it. Oh, and PayPal said it would make a $500 million investment in the company in a private placement, as part of an extension of the partnership between the two.

There are a lot of fascinating companies raising colossal rounds, so I thought I’d dive a bit deeper than I normally do. Bear with me.

Carbon: The poster child for 3D printing has authorized the sale of $300 million in Series E shares, according to a Delaware stock filing uncovered by PitchBook. If Carbon raises the full amount, it could reach a valuation of $2.5 billion. Using its proprietary Digital Light Synthesis technology, the business has brought 3D-printing technology to manufacturing, building high-tech sports equipment, a line of custom sneakers for Adidas and more. It was valued at $1.7 billion by venture capitalists with a $200 million Series D in 2018.

Canoo: The electric vehicle startup formerly known as Evelozcity is on the hunt for $200 million in new capital. Backed by a clutch of private individuals and family offices from China, Germany and Taiwan, the company is hoping to line up the new capital from some more recognizable names as it finalizes supply deals with vendors, according to reporting from TechCrunch’s Jonathan Shieber. The company intends to make its vehicles available through a subscription-based model and currently has 400 employees. Canoo was founded in 2017 after Stefan Krause, a former executive at BMW and Deutsche Bank, and another former BMW executive, Ulrich Kranz, exited Faraday Future amid that company’s struggles.

Starry: The Boston-based wireless broadband internet startup has authorized the sale of Series D shares worth up to $125 million, according to a Delaware stock filing. If Starry closes the full authorized raise it will hold a post-money valuation of $870 million. A spokesperson for the company confirmed it had already raised new capital, but disputed the numbers. The company has already raised more than $160 million from investors, including FirstMark Capital and IAC. The company most recently closed a $100 million Series C this past July.

Selina & Sonder: The Airbnb competitor Sonder is in the process of closing a financing worth roughly $200 million at a $1 billion valuation, reports The Wall Street Journal. Investors including Greylock Partners, Spark Capital and Structure Capital are likely to participate. Sonder is four years old but didn’t emerge from stealth until 2018. The startup, which turns homes into hotels, quickly attracted more than $100 million in venture funding. Meanwhile, another hospitality business called Selina has raised $100 million at an $850 million valuation. The company, backed by Access Industries, Grupo Wiese and Colony Latam Partners, builds living/co-working/activity spaces across the world for digital nomads. 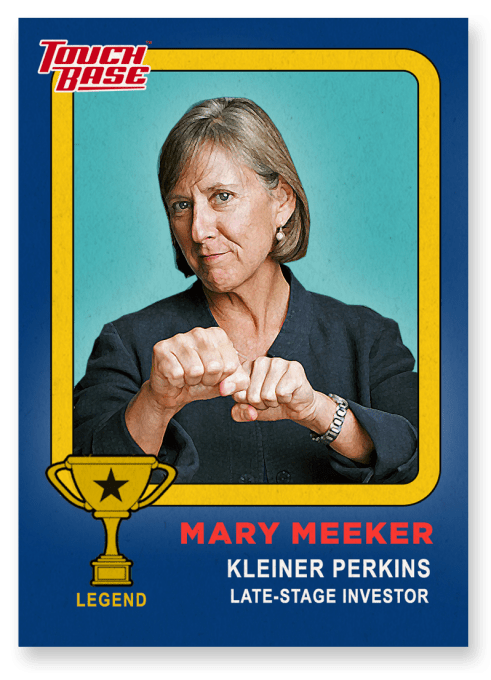 Fresh funds: Mary Meeker has made history with the close of her new fund, Bond Capital, the largest VC fund founded and led by a female investor to date. Bond has $1.25 billion in committed capital. If you remember, Meeker ditched Kleiner Perkins last fall and brought the firm’s entire growth team with her. Kleiner said it was a peaceful split that would allow the firm to focus more on its early-stage efforts, leaving the growth investing to Bond. Fortune, however, reported this week that a power struggle of sorts between Meeker and Mamoon Hamid, who joined recently to reenergize the early-stage side of things, was a larger cause of her exit.

Plus, SOSV, a multi-stage venture firm that was founded as the personal investment vehicle of entrepreneur Sean O’Sullivan after his company went public in 1994, has raised $218 million for its third fund. The vehicle has a $250 million target that SOSV expects to meet. Already, the fund is substantially larger than the firm’s previous vehicle, which closed with $150 million.

A grocery delivery startup crumbles: Honestbee, the online grocery delivery service in Asia, is nearly out of money and trying to offload its business. Despite looking impressive from the outside, the company is currently in crisis mode due to a cash crunch — there’s a lot happening right now. TechCrunch’s Jon Russell dives in deep here.

Extra Crunch: “When it comes to working with journalists, so many people are, frankly, idiots. I have seen reporters yank stories because founders are assholes, play unfairly, or have PR firms that use ridiculous pressure tactics when they have already committed to a story.” Sign up for Extra Crunch for a full list of PR don’ts. Here are some other EC pieces to hit the wire this week:

Equity: If you enjoy this newsletter, be sure to check out TechCrunch’s venture-focused podcast, Equity. In this week’s episode, available here, Crunchbase News editor-in-chief Alex Wilhelm and I chat about Kleiner Perkins, Chinese IPOs and Slack & Uber’s upcoming exits.