Shopify is expanding its efforts in brick-and-mortar retail with the launch of its new retail hardware collection.

The company is best-known as a platform for building online stores, but it also offers point-of-sale software for physical stores, and it launched a credit card reader a couple of years ago. With the new collection — which includes a redesigned Tap & Chip Reader, as well as the Dock and Retail Stand — Shopify has created a more comprehensive solution for offline retail.

Chief Product Officer Craig Miller told me that Shopify is taking advantage of an “industry-wide trend,” where online retailers hit a “tipping point” and realize that “the next step to scale your business is opening an offline store.” He pointed to bedding and home decor company Parachute as an example — after all, Miller and his team were demonstrating the hardware in Parachute’s New York City store.

He suggested that Shopify’s biggest advantage is the ability to bridge a retailer’s online and offline businesses — among other things, allowing them to track all their inventory in one place, or to offer customers the ability to order a product online and pick it up in-store.

“Consumer expectations are just going through the roof,” Miller said. And while these kinds of capabilities “might be available at some of the larger stores, when you think about smaller retail, they don’t have access to that enterprise stuff. We’ve been able to create one package that does it all.” 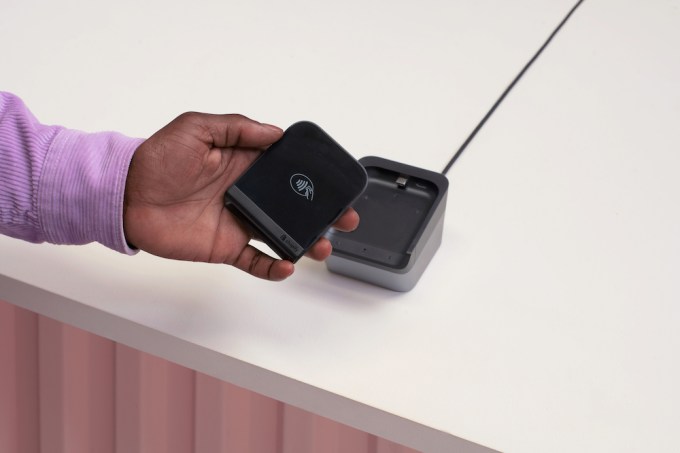 A bit more about the hardware itself: The Stand allows retailers to mount and charge a tablet, which can also swivel across a counter to allow the customer to check out. The Tap & Chip Reader, meanwhile, has been redesigned to fit in with the rest of the new hardware lineup, and it can be mounted and charged on the Dock.

The whole setup can be placed on a traditional checkout counter, or simply carried and used around the store.

As a shopper, the experience might feel similar to paying at one of those familiar Square stands and card readers. While Miller didn’t mention Square specifically, he acknowledged that Shopify isn’t the first company to create this kind of product.

“We’ve always been a believer that first-to-market is not always the winner,” he said. “Just as a company, we’re philosophically inclined to taking our time just to understand what the market is looking for, to challenge some assumptions — like whether there even needs to be a checkout counter.”

The new hardware can be purchased individually or in a combined retail kit that costs $229.

Shopify is bringing Apple’s latest AR tech to their platform