Microsoft reported its quarterly earnings for Q3 2019 today. Overall, Wall Street expected earnings of about $1 per share and revenue of $29.84 billion. The company handily beat this with revenue of $30.6 billion (up 14 percent from the year-ago quarter) and earnings per share of $1.14.

With Microsoft focusing heavily on its cloud business, with both Azure and its other cloud-based services, it’s no surprise that this is also what Wall Street really cares about. The expectation here, according to some analysts, was that the company’s overall commercial cloud business would hit a run rate of about $38.5 billion. Those analysts we’re off by only a tiny bit. Microsoft today reported that its commercial cloud run-rate hit $38.4 billion.

And indeed, Microsoft Azure had a pretty good quarter, with revenue growing 73 percent. That’s a bit lower than last quarter’s results, but only by a fraction, and shows that there is plenty of growth left for Microsoft’s cloud infrastructure business.

Azure’s growth slowed somewhat in recent quarters. In some ways, that’s to be expected, though. Microsoft’s cloud is now a massive business, and posting 100 percent growth when you have a run rate of almost $40 billion becomes a bit harder.

“Demand for our cloud offerings drove commercial cloud revenue to $9.6 billion this quarter, up 41 percent year-over-year,” said Amy Hood, executive vice president and chief financial officer of Microsoft. “We continue to drive growth in revenue and operating income with consistent execution from our sales teams and partners and targeted strategic investments.”

The company’s “intelligent cloud” segment, which includes Azure and other cloud- and server-based products, reported revenue of $9.7 billion, up 22 percent from the year-ago quarter. 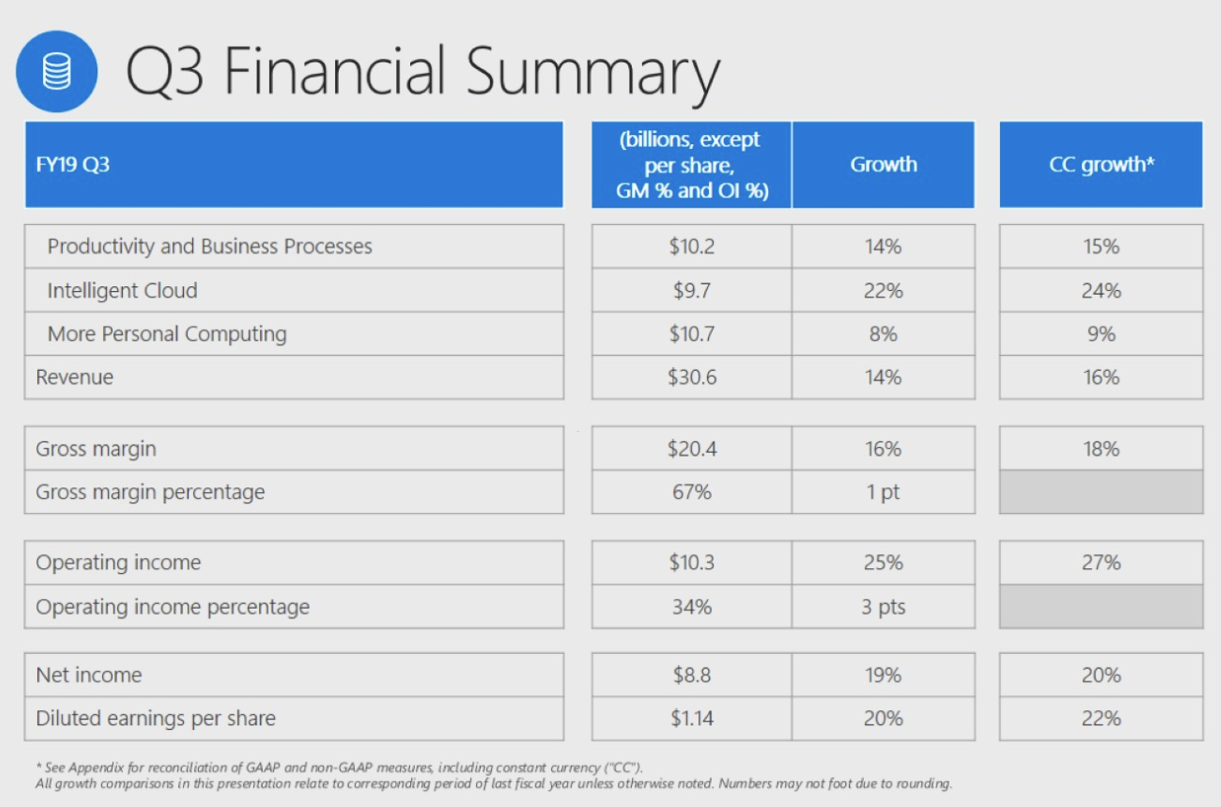 Other highlights of the report include an increase in Surface revenue of 21 percent, which was expected, given the number of new devices the company released in recent quarters.

“Leading organizations of every size in every industry trust the Microsoft cloud. We are accelerating our innovation across the cloud and edge so our customers can build the digital capability increasingly required to compete and grow,” said Satya Nadella, CEO of Microsoft.

For more financial details, you can find the full report here.