With the latest desktop version of the Brave browser, users can now opt-in to the Brave Ads program.

Brave is an ad-blocking web browser startup led by Brendan Eich, creator of the JavaScript programming language and former Mozilla CEO. He’s long maintained that the vision is “bigger than an ad blocker,” with a goal of finding new ways to compensate online publishers.

Brave Ads are a crucial part of that vision. The company says users who choose to participate in the program will receive 70 percent of the revenue generated by the ads they see. Their rewards will take the form of Basic Attention Tokens (BAT), a cryptocurrency that the users can, in turn, share with the creators of the content that they’re watching.

Eich told me that the browser is set by default to donate a user’s BAT at the end of the month to their most-visited sites, but the company also plans to let users exchange BAT for rewards like hotel rooms and restaurant vouchers (through the TAP Network created by the startup Hooch). They should also, eventually, be able to cash out with regular “fiat currency” through exchanges like Coinbase and Uphold.

Brave has been testing ads since January, and Eich said that more than 40 percent of desktop users have been opting in. Certainly, some Brave users may simply want to use the browser for its ad-blocking capabilities, but he suggested that the more “ecologically minded ones” will want to participate, rather than getting a “free ride.” 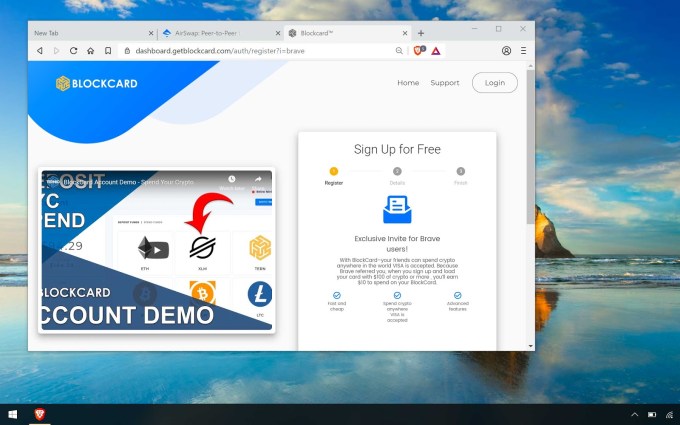 “A lot of users don’t want to cash out [when they receive BAT],” he added. “It’s not a huge amount of value for most people, so they may prefer to just use it to give back. And that’s the real idea: A browser with the user steering it is replacing the ad tech complex.”

The ads are also supposed to protect user privacy. There is a degree of targeting, but Eich said all the data and “decision-making” happens on the device, so Brave and the advertiser never get access to it. (Brave does aggregate anonymized, high-level data so that advertisers can see who viewed their campaigns.)

The ads appear in the browser and don’t replace a previously blocked ad. Brave says the ads are coming from partners like Vice, Home Chef, ConsenSys, Ternio BlockCard, MyCrypto and eToro.

The company also has plans to work with publishers that want to run ads when their site is viewed on the browser, with the revenue then split between Brave, the publisher and the user.