The market for voice apps has opened up — Amazon Alexa’s platform alone has more than 80,000 skills as of earlier this year — and there’s little sign of that growth slowing now that smart speakers have hit critical mass in the U.S. To capitalize on this trend, Voiceflow, a startup making it easier for product teams to build voice applications for Alexa and Google Assistant, has raised $3 million in seed funding.

The round was led by True Ventures, and includes participation from Product Hunt founder Ryan Hoover, Eventbrite founder Kevin Hartz and InVision founder Clark Valberg. The company has previously raised $500,000 in pre-seed funding.

Explains Voiceflow CEO and co-founder Braden Ream, the idea for a collaborative platform for building voice apps came from direct experience as a voice app developer.

But as the team began to build out its library of these choose-your-own-adventure stories, they realized the process wasn’t scaling fast enough to serve their user base — they simply couldn’t build the storyboards with all their branches fast enough. 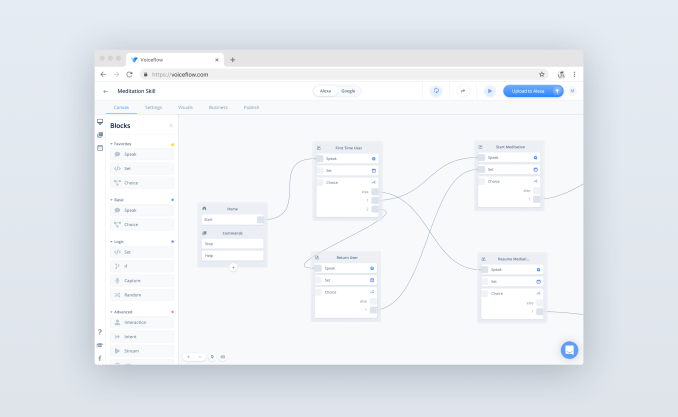 “At some point, we had the idea to just do a drag-and-drop,” says Ream. “I wished I could build the flow chart, the scripting and the actual coding — I wished this was all one step. That led us to build a really early iteration of what is now Voiceflow. It was sort of an internal tool,” he continues. “And being the nerds that we are, we kept making the platform better by adding logic, variables and modularity.”

The original plan was to make Storyflow’s platform a “YouTube of voice” so anyone could build their stories easily.

But when the Storyflow community got ahold of what the team had built, they very quickly wanted to use it to build their own voice apps — not just interactive stories.

“That’s when the light bulb went off for us,” notes Ream. “This could easily be the central platform for building voice apps, and not necessarily interactive children’s stories. The pivot was very easy,” he says. “All we had to do was change our name from Storyflow to Voiceflow.” 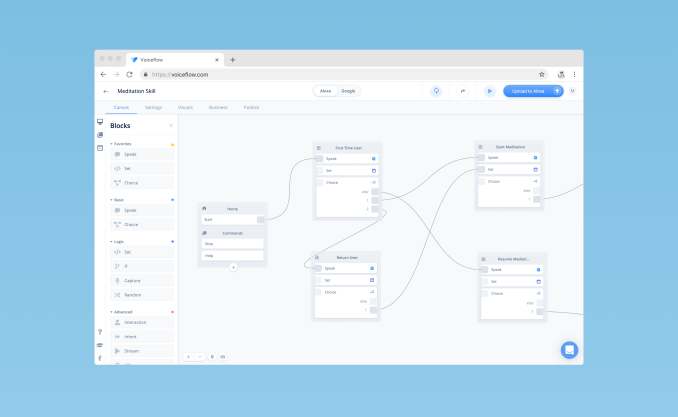 The platform officially launched in November, and today has more than 7,500 customers who have published some 250 voice apps using its tools.

Voiceflow is designed to be non-technical for those who don’t know how to code. For example, its two basic block types are “speak” and “choice.” Its blocks are organized on the screen through drag-and-drop, as users design the flow of their app. For more technical users, an advanced section allows you to add logic and variables — but it’s still entirely visual.

For enterprise customers, there’s also an API block in Voiceflow that allows the customer to integrate the business’s own API into their voice app.

What’s also interesting about the product is its collaborative features. While Voiceflow is free for individuals, its business model is focused on allowing teams to work together to build voice apps. Priced at $29 per month in its paid workspaces, voice agencies that have a larger staff — including linguists, voice user interface designers and developers, for example — can all work together on one board, share projects and hand off assets more easily. 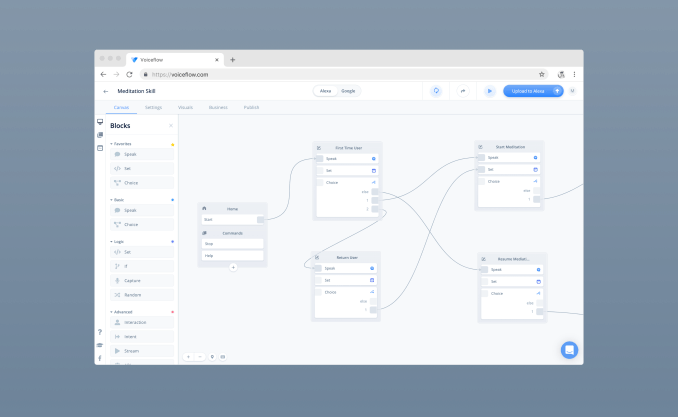 With the seed funding, Voiceflow plans to grow the team by hiring more engineers and continue to develop the platform.

“The problem right now is you have documentation and best practices by Google. Then you have the exact same on the Alexa side, but there’s no coherent industry standard. And there’s certainly no tangible base of examples, or easy way to put these into practice,” Ream explains. “If we can help spawn another 10,000 voice user interface designers — we can help train them and give them a platform that’s accessible, where they can collaborate with each other — I think you’re going to see a tremendous uplift in the quality of conversations.”

On this front, Voiceflow has started a program called Voiceflow University, which today includes video tutorials but will later become a more standardized training course.

In addition to the videos, Voiceflow networks with its community directly on Facebook, where more than 2,500 developers, linguists, educators, designers and entrepreneurs actively discuss the voice app design and development process. 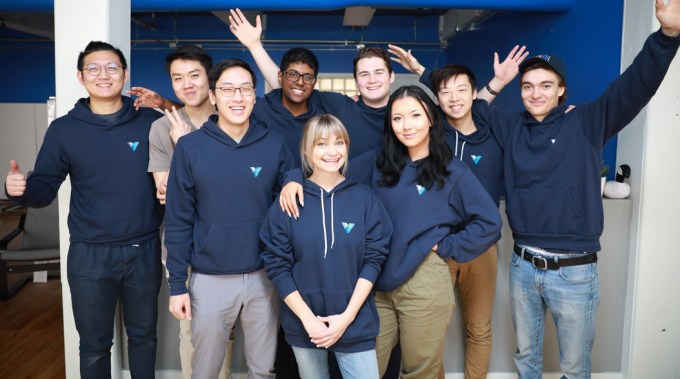 This interaction between Voiceflow and its user base was one of the key selling points for True Ventures’ Tony Conrad.

“After I left the [pitch] meeting and I started digging around a little bit, the thing that blew me away was the engagement of the community of developers. That’s unlike anybody else. The single biggest differentiator of this platform is actually Braden and the team’s engagement with the community,” Conrad says. “It reminds me of early WordPress.”

Voiceflow also recently worked with another visual design tool, Invocable, which has shut down, to allow its users to transition to Voiceflow’s platform.

There is, perhaps, a cautionary tale in there — Invocable, in its farewell blog post, points out that people continue to use smart speakers mainly for things like music, news, reminders and simple commands. It also says that Natural Language Processing and Natural Language Understanding haven’t developed to the point where they can support higher-quality voice apps. That day will likely come to pass, but there’s a bit of a timing issue when it comes to betting on the right platform to support the voice app development market in the meantime, ahead of widespread consumer adoption.

Toronto-based Voiceflow is a team of 12 today and looking to grow.