After a year of its user count shrinking or staying flat, Snapchat is finally growing again, and more growth is likely on the way. That’s because it’s finally completed the rollout of Project Mushroom, aka a backend overhaul of its Android app that’s 25 percent smaller and 20 percent faster. Designed for India and other emerging markets where iPhones are too expensive, Snapchat saw an immediate 6 percent increase in the number of people on low-end devices sending Snaps within the first week of upgrading to the new Android app.

Snapchat grew from 186 million daily active users in Q4 2018 to 190 million in Q1 2019, adding 1 million in North America, 1 million in Europe and 2 million in the Rest of World, where the Android app makes the biggest difference despite rolling out near the end of the quarter. It has been a long wait, as Snap first announced the Android reengineering project in November 2017.

“As of the end of Q1, our new Android application is available to everyone,” Snap CEO Evan Spiegel wrote in his prepared remarks for today’s estimate-beating earnings report. “While these early results are promising, improvements in performance and new user retention will take time to compound and meaningfully impact our top-line metrics. There are billions of Android devices in the world that now have access to an improved Snapchat experience, and we look forward to being able to grow our Snapchat community in new markets.” 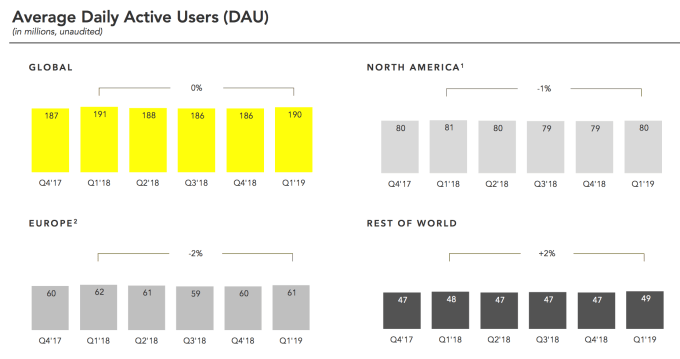 Some of the growth stemmed from tweaks to Snapchat’s ruinous redesign, including better personalized ranking of Stories and Discover content, as well as new premium video Shows. Now with the Android app humming, though, we might see significant growth in the Rest of World region in Q2.

Unfortunately, since Snapchat uses bandwidth and storage-heavy video, more usage also means more Amazon AWS and Google Cloud expenditures. That’s partly why Snapchat is predicting a slight increase in adjusted EBITDA losses from $123 million in Q1 to between $125 million and $150 million in Q2. Rest of World users only earn Snap about one-third as much money as North American users, but cost nearly as much to support.

We first highlighted Snap’s neglect of the international teen Android market when Instagram Stories launched in August 2016. Spiegel and Snap were too focused on cool American teens, squandering this market that was snapped up by Facebook’s Instagram and WhatsApp. Now Snapchat will have a much harder time winning emerging markets as they’re not the first to bring Stories there. But if it can double-down on ephemeral messaging, premium video and its augmented reality platform that are leagues ahead of Facebook’s offerings, it could finally creep toward that 200 million DAU milestone.