With just a few days until the release of “Avengers: Endgame,” Marvel fans everywhere are probably wondering A) Who dies?? and B) Will this actually resolve the cliffhanger ending of “Infinity War” in a satisfying way?

Certainly, if you’re like me and found yourself fatigued by the constant, overcrowded battles of “Infinity War,” the beginning of “Endgame” will come as an enormous relief. There’s a brief flicker of action, then we get plenty of time to deal with the fallout from “Infinity War.” (And if you don’t already know how that movie ends, why are you reading this review?)

We see that half the population of Earth, and the universe, really died after Thanos’ magical finger snap, leaving the original Avengers team and a handful of other heroes to try to rebuild and move on. There’s plenty about the aftermath that simply gets hand-waved away with a few shots of empty streets and grieving extras — but we get to spend time with characters like Iron Man, Captain America and the Hulk, to see how they’ve responded and changed in the wake of universal catastrophe. 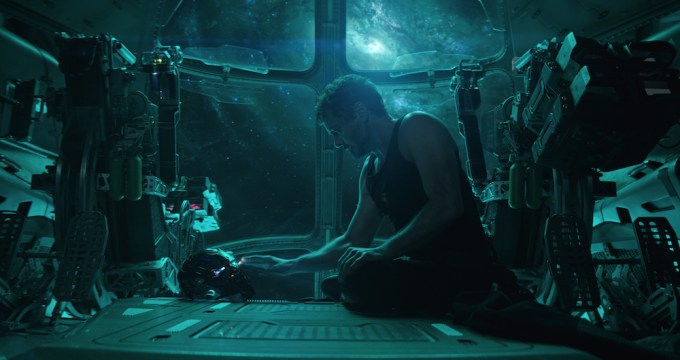 Of course, they’re not sitting around moping for the entire three-hour (!) runtime. Eventually, a plan is hatched to undo what Thanos has done. And while I’m going to stay as vague as possible about that plan, I think it’s safe to say that the results are textbook fan service.

After all, as its name makes clear, “Endgame” is meant to serve as the culmination of the entire Marvel Cinematic Universe, and as a final act for some of its most famous heroes. The film’s middle stretch feels very much like a farewell tour, working overtime to remind viewers of everything they like about these characters and their stories.

Diehard Marvel fans, I suspect, will eat it up. Casual viewers may not be quite as satisfied.

Personally, I was delighted when I realized what the filmmakers were going to do. But as these sequences went on, and on, and on, my enthusiasm waned. By the time the grand finale began, virtually all the goodwill built up during the film’s opening had evaporated.

So by the simple metric of whether “Endgame” finds a way to reverse the ending of “Infinity War” in a way that doesn’t feel cheap or cynical, I’m afraid I’d say it’s a failure. And I’m not sure I can claim that the ending is any less cynical or sentimental.

For this viewer, however, that ending absolutely works — so effectively that it not only salvages the movie, not only helps me forgive the draggy bits, but even makes me think of “Infinity War” more warmly.

As the MCU has gone on, it’s become increasingly difficult to regard the whole enterprise without skepticism — to see it as something other than an excuse to create one guaranteed blockbuster after another, each one leading inexorably to the next. And although some of those blockbusters are very good indeed, Marvel’s weakest moments feel like obvious concessions to this strategy, with stories that either grind to a halt introducing new characters and subplots, or get dragged out needlessly in sequel after sequel.

But in the closing minutes of “Endgame,” I forgot all that. As our heroes arrived for a final, desperate battle, it felt like the triumphant climax that every single one of these films has been building up to.

And when the end came, it wasn’t an excuse to conveniently shuffle certain actors offstage. Instead, Marvel found a natural endpoint for the characters’ stories. And in one case — the film’s final shot — it didn’t just feel natural. It felt perfect.

There will be more Marvel movies. The Avengers will, inevitably, return — at least in some form. But I was thrilled and moved with the way some of them said goodbye.