Cyrus Summerlin and Max Hellerstein, who previously created the Push for Pizza app (which allowed users to order a pizza with the push of a button), are officially launching their new startup today, Down to Shop.

The app bills itself as both a modern reinvention of QVC and “the funnest way to shop.” It allows users to watch funny videos featuring products that can be purchased directly from the app.

In an email, Hellerstein said the pair created Down to Shop out of dissatisfaction with existing advertising and e-commerce. Summerlin described it as “a hypermedia commerce platform.”

“We’ve created a self-aware, fun and entertaining, interactive environment that gets customers to engage with brands like never before — because they want to,” Summerlin said. “What a concept!”

To do this, Down to Shop says it has recruited a creative team of Upright Citizens Brigade alums and Instagram influencers to star in its shows, which are written, filmed and edited in the startup’s Los Angeles studios. The content is built around four-week seasons, with daily episodes across five shows each season. 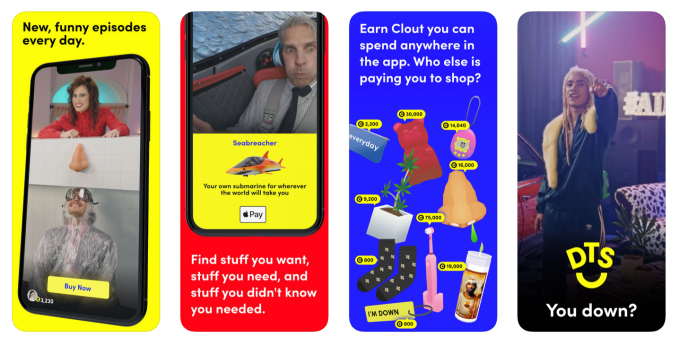 You can download the iOS app now, then swipe through different videos and games. Judging from the videos available at launch, the app is holding true to its promise of “content first, advertising second,” with laid-back, tongue-in-cheek shows that also happen to feature promoted products.

By playing games and watching videos, you also earn Clout, the in-app currency that be used to make purchases. As for the products available to purchase, the company says it’s already working with more than 60 brands, including Sustain Condoms, Dirty Lemon (water) and Pretty Litter (cat litter).

Down to Shop’s investors include Greycroft, Lerer Hippeau and Firstmark. The startup isn’t disclosing the size of its funding, but according a regulatory filing, it raised $5.9 million last fall.