Douyu, a Chinese live streaming service focused on video games, has filed with the U.S. Securities and Exchange Commission as it prepares to raise up to $500 million on the NYSE less than a year after its archrival floated on the same stock market.

Wuhan-based Douyu, whose name translates as “fighting fish”, is the second Twitch-like service backed by Tencent to go public in the United States. Its direct competitor Huya, who has a similarly fierce name “tiger’s teeth” and also counts Tencent as a major investor, raised $180 million from its NYSE listing last May.

It’s not surprising for Tencent to hedge its bets in esports streaming, given the giant relies heavily on video games to make money. For example, Tencent can use some of its portfolio companies’ ad slots to get the word out about its new releases. Indeed, Douyu’s filing shows it received a hefty 27.48 million yuan ($4.09 million) in advertising fees from Tencent last year.

As Douyu warns in its prospectus, its alliance with Tencent can be tenuous.

“Tencent may devote resources or attention to the other companies it has an interest in, including our direct or indirect competitors. As a result, we may not fully realize the benefits we expect from the strategic cooperation with Tencent. Failure to realize the intended benefits from the strategic cooperation with Tencent, or potential restrictions on our collaboration with other parties, could materially and adversely affect our business and results of operations.”

But there are nuances in the giant’s ties to China’s top two live streaming services that could mean more affinity between Tencent and Douyu. The social media and gaming behemoth is currently Douyu’s largest shareholder with a 40.1 percent stake owned through its wholly-owned subsidiary Nectarine. Over at Huya, Tencent is the second-largest stakeholder behind YY, the pioneer in China’s live streaming sector that had spun off Huya.

When it comes to the financial terms, the rivaling pair is in a head-on race. In 2018, Douyu doubled its net revenues to $531.5 million. Huya held an edge as it earned $678.3 million in the same period, also doubling the amount from a year ago.

Huya may have learned a few things about monetizing live streaming from 14-year-old YY as it managed to pull in more revenues despite owning a smaller user base. Douyu claimed 153.5 million monthly active users in the fourth quarter compared to 134.4 million in the year-earlier period. Huya clocked in 116.6 million MAUs in the fourth quarter, up from 86.7 million a year ago.

How the two make money also diverge slightly. In the fourth quarter, 86 percent of Douyu’s revenues originated from virtual items that users tipped to their favorite streaming hosts, with the remaining earnings derived from advertising and more. By contrast, Huya relied almost exclusively on live streaming gifts, which made up 95.3 percent of total revenues. 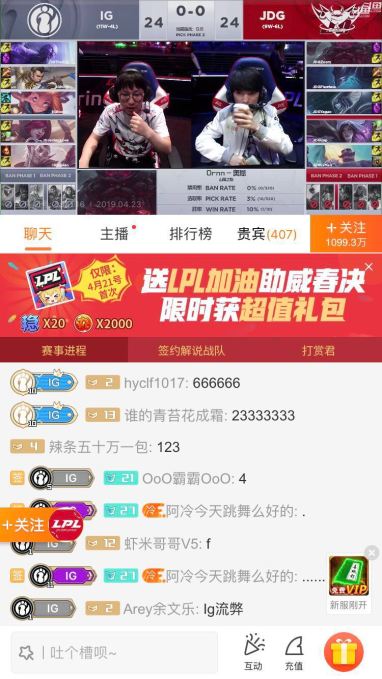 As Douyu grows its coffers to spend on content as well as technologies following the impending IPO, competition in China’s live streaming landscape is set to heat up. Just earlier this month, Huya raised $327 million in a secondary offering to invest in content and R&D. Like many other businesses anchored in content, Huya and Douyu depend tremendously on quality creators to keep users loyal. Both have offered sizable checks to live streaming hosts, promising to grow the internet celebrities into bigger stars.

And they’ve extended the battlefield outside China as emerging media forms, most exemplified by short video services Douyin (TikTok’s China version) and Kuaishou, threaten to steal people’s eyeball time away. Both bite-size video apps now enjoy a much bigger user base than their live streaming counterparts.

“We intend to further explore overseas markets to expand our user base through both organic expansion and selective investments,” noted Douyu in its IPO filing.

In a similar move, Huya’s overseas expansion is also well underway. “In addition to our vigorous domestic growth, we have successfully leveraged our unique business model to enter new overseas markets. We believe we are delivering long-term value through strategic investments in overseas markets in 2019 and beyond,” said Huya chief executive Rongjie Dong in the company’s Q4 earnings report.