Alphabet’s subsidiary focused on urban tech development, Sidewalk Labs, is now trying to reinvent signage for smart cities. These signs aren’t to direct the flow of traffic, or to point the way to urban landmarks — they’re designed to let citizens know when they’re being monitored.

The proposal is part of a push by the company to acclimate people to the technologies that it’s deploying in cities like New York and Toronto.

Globally, competition for contracts to deploy sensors, data management and predictive technologies in cities can run into the tens of millions, if not billions of dollars, and Sidewalk Labs knows this better than most. Because its projects are among the most ambitious deployments of sensing and networking technologies for smart cities, the company has also faced the most public criticism.

So at least partially in an attempt to blunt attacks from critics, the company is proposing to make its surveillance and monitoring efforts more transparent.

“Digital technology is all around us, but often invisible. Consider: on any one urban excursion (your commute, perhaps), you could encounter CCTVs, traffic cameras, transit card readers, bike lane counters, Wi-Fi access points, occupancy sensors that open doors — potentially all on the same block,” writes Jacqueline Lu, whose title is “assistant director of the public realm” at Sidewalk Labs.

Cities like Boston and London already indicate when technology is being used in the urban environment, but Sidewalk Labs convened a group of designers and urban planners to come up with a system for signage that would make the technology being used even more public for citizens going about their day. 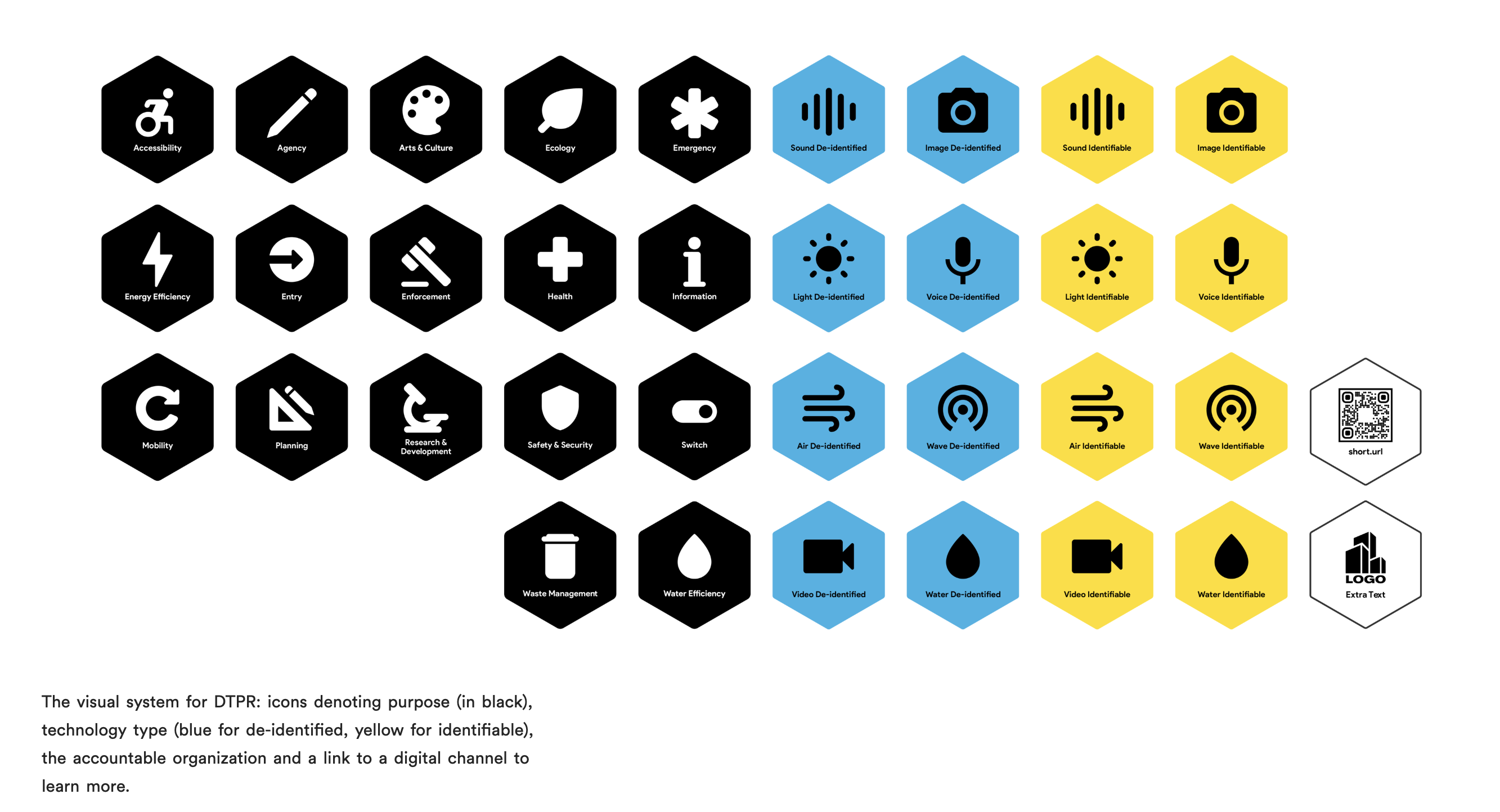 Back in 2013, the U.S. Federal Trade Commission called for the development of these types of indicators when it issued a call for mobile privacy disclosures. But that seems to have resulted in companies just drafting reams of jargon-filled disclosures that obscured more than they revealed.

At Sidewalk, the goal is transparency, say the authors of the company’s suggested plan.

“We strongly believe that people should know how and why data is being collected and used in the public realm, and we also believe that design and technology can meaningfully facilitate this understanding. For these reasons, we embarked on a collaborative project to imagine what digital transparency in the public realm could be like,” writes Lu and her co-authors Principal Designer Patrick Keenan and Legal Associate Chelsey Colbert.

As an example, Sidewalk showed off potential designs for signage that would alert people to the presence of the company’s use of Numina technology.*

That startup company’s tech monitors traffic patterns by recording, anonymizing and transmitting data from sensors using digital recording and algorithmically enhanced software to track movement in an area. These sensors are installed on light poles and transmit data wirelessly.

At the very least, the technology can’t be any worse than the innocuously intended cameras that are monitoring public spaces already (and can be turned into surveillance tools easily). 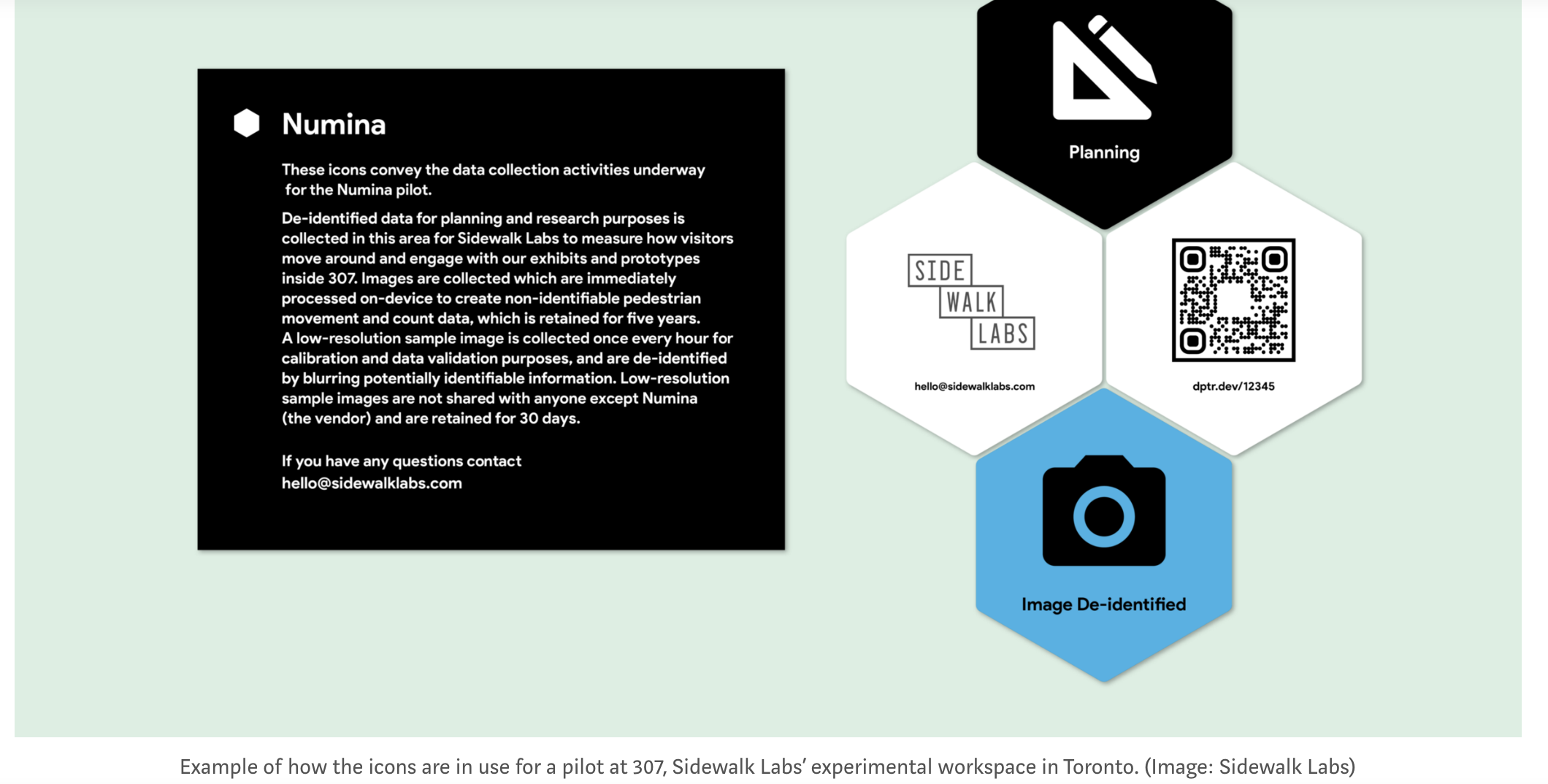 The hexagonal designs indicate the purpose of the technology, the company deploying it, the reason for its use, whether or not the tech is collecting sensitive information and a QR code that can be scanned to find out more information.

The issue with experiments like these in the public sphere is that there’s no easy way to opt out of them. Sidewalk Lab’s Toronto project is both an astounding feat of design and the apotheosis of surveillance capitalism.

Once these decisions are made to cede public space to the private sector, or sacrifice privacy for security (or simply better information about a location for the sake of convenience), they’re somewhat difficult to unwind. As with most of the salient issues with technology today, it’s about unintended consequences.

Information about a technology’s deployment isn’t enough if the relevant parties haven’t thought through the ramifications of that technology’s use.

*This article was updated to indicate that Numina is an independent company whose technology is being deployed by Sidewalk Labs.