If you think physical retail is dead, you couldn’t be more wrong. Despite the explosion in e-commerce, we’re still buying plenty of stuff in offline stores. In 2017, U.S. retail sales totaled $3.49 trillion, of which only 13 percent (about $435 billion) were e-commerce sales. True, e-commerce is growing at a much faster annual pace. But we’re still very far from the tipping point.

Amazon, the e-commerce giant, is playing an even longer game than everyone thinks. The company already dominates online retail — Amazon accounted for almost 50 percent of all U.S. e-commerce dollars spent in 2018. But now Amazon is eyeing the much bigger prize: modernizing and dominating retail sales in physical locations, mainly through the use of sophisticated data analysis. The recent reports of Amazon launching its own chain of grocery stores in several U.S. cities — separate from its recent Whole Foods acquisition — is just one example of how this could play out.

You can think of this as the Amazon one-two punch: The company’s vast power in e-commerce is only the initial, quick jab to an opponent’s face. Data-focused innovations in offline retail will be Amazon’s second, much heavier cross. Traditional retailers too focused on the jab aren’t seeing the cross coming. But we think canny retailers can fight back — and avoid getting KO’d. Here’s how.

The e-commerce jab starts with warehousing

Physical storage of goods has long been crucial to advances in commerce. Innovations here range from Henry Ford’s conveyor belt assembly line in 1910, to IBM’s universal product code (the “barcode”) in the early 1970s, to J.C. Penney’s implementation of the first warehouse management system in 1975. Intelligrated (Honeywell), Dematic (KION), Unitronics, Siemens and others further optimized and modernized the traditional warehouse. But then came Amazon.

After expanding from books to a multi-product offering, Amazon Prime launched in 2005. Then, the company’s operational focus turned to enabling scalable two-day shipping. With hundreds of millions of product SKUs, the challenge was how to get your pocket 3-layer suture pad (to cite a super-specific product Amazon now sells) from the back of the warehouse and into the shippers’ hands as quickly as possible.

Make no mistake: Amazon’s one-two retail punch will be formidable.

Amazon met this challenge at a time when automated warehouses still had massive physical footprints and capital-intensive costs. Amazon bought Kiva Systems in 2012, which ushered in the era of Autonomous Guided Vehicles (AGVs), or robots that quickly ferried products from the warehouse’s depths to static human packers.

Since the Kiva acquisition, retailers have scrambled to adopt technology to match Amazon’s warehouse efficiencies.  These technologies range from warehouse management software (made by LogFire, acquired by Oracle; other companies here include Fishbowl and Temando) to warehouse robotics (Locus Robotics, 6 River Systems, Magazino). Some of these companies’ technologies even incorporate wearables (e.g. ProGlove, GetVu) for warehouse workers. We’ve also seen more general-purpose projects in this area, such as Google Robotics. The main adopters of these new technologies are those companies that feel Amazon’s burn most harshly, namely operators of fulfillment centers serving e-commerce.

The schematic below gives a broad picture of their operations and a partial list of warehouse/inventory management technologies they can adopt: 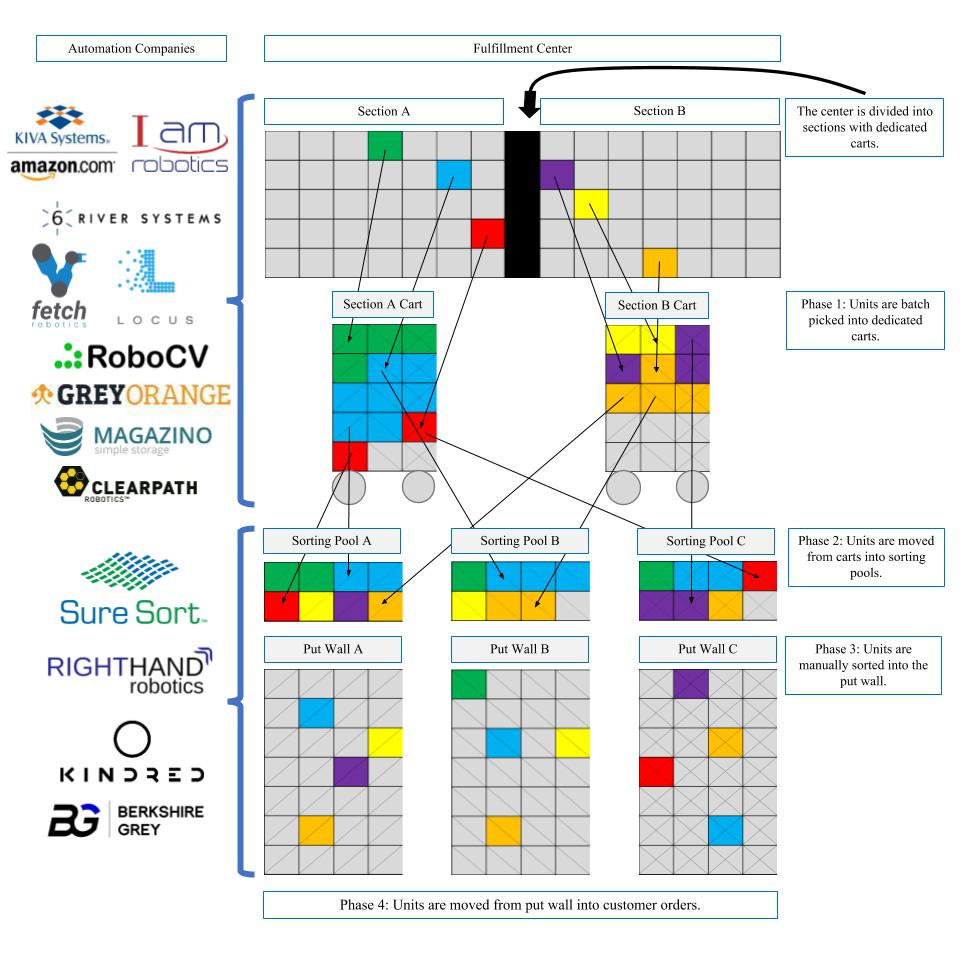 It’s impossible to say what optimizations Amazon will bring to warehousing beyond these, but that may be less important to predict than retailers realize.

Amazon has made several recent forays into offline shopping. These range from Amazon Books (physical book stores), Amazon Go (fast retail where consumers skip the cashier entirely) and Amazon 4-Star (stores featuring only products ranked four-stars or higher). Amazon Live is even bringing brick-and-mortar-style shopping streaming to your phone with a home-shopping concept à la QVC. Perhaps most prominently, Amazon’s 2017 purchase of Whole Foods gave the company an entrée into grocery shopping and a nationwide chain of physical stores.

Most retail-watchers have dismissed these projects as dabbling, or — in the case of Whole Foods — focused too narrowly on a particular vertical. But we think they’re missing Bezos’ longer-term strategic aim. Watch that cross: Amazon is mastering how physical retail works today, so it can do offline what it already does incredibly well online, which is harness data to help retailers sell much more intelligently. Amazon recognizes certain products lend themselves better to offline shopping — groceries and children’s clothing are just a few examples.

How can traditional retailers fight back? Get more proactive.

Those shopping experiences are unlikely to disappear. But traditional retailers (and Amazon offline) can understand much, much more about the data points between shopping and purchase. Which path did shoppers take through the store? Which products did they touch and which did they put into a cart? Which items did they try on, and which products did they abandon? Did they ask for different sizes? How does product location within the store influence consumers’ willingness to buy? What product correlations can inform timely marketing offers — for instance, if women often buy hats and sunglasses together in springtime, can a well-timed coupon prompt an additional purchase? Amazon already knows answers to most of these questions online. They want to bring that same intelligence to offline retail.

Obviously, customer privacy will be a crucial concern in this brave new future. But customers have come to expect online data-tracking and now often welcome the more informed recommendations and the convenience this data can bring. Why couldn’t a similar mindset-shift happen in offline retail?

How can retailers fight back?

Make no mistake: Amazon’s one-two retail punch will be formidable. But remember how important the element of surprise is. Too many venture capitalists underestimate physical retail’s importance and pooh-pooh startups focused on this sector. That’s extremely short-sighted.

Does the fact that Amazon is developing computer vision for Amazon Go mean that alternative self-checkout companies (e.g. Trigo, AiFi) are at a disadvantage? I’d argue that this validation is actually an accelerant as traditional retail struggles to keep up.

How can traditional retailers fight back? Get more proactive. Don’t wait for Amazon to show you what the next best-practice in retail should be. There’s plenty of exciting technology you can adopt today to beat Jeff Bezos to the punch. Take Relex, a Finnish startup using AI and machine learning to help brick-and-mortar and e-commerce companies make better forecasts of how products will sell. Or companies like Memomi or Mirow that are creating solutions for a more immersive and interactive offline shopping experience.

Amazon’s one-two punch strategy seems to be working. Traditional retailers are largely blinded by the behemoth’s warehousing innovations, just as they are about to be hit with an in-store innovation blow. New technologies are emerging to help traditional retail rally. The only question is whether they’ll implement the solutions fast enough to stay relevant.