Airbase is a startup with a plan to change the way you think about accounting around spending. Instead of multiple workflows, it wants to create a simpler one involving, well, Airbase. It’s a bold move for any startup to take on something as entrenched as financials, but it’s giving it a shot, and today the company launched with a $7 million Series A investment.

First Round Capital was lead investor. Maynard Webb, Village Global, BoxGroup and Quiet Capital also participated. The deal closed at the end of November last year. This is the first external funding for the company, which company founder and CEO Thejo Kote had bootstrapped previously with $300,000 of his own money.

“At a high level, Airbase is the first all-in-one spend management system. It replaces a number of different systems that companies use to manage how they spend money,” Kote told TechCrunch.

He knows of what he speaks. Prior to starting this company, Kote co-founded Automatic, a startup that he sold to SiriusXM for more than $100 million in 2017. As a founder, he saw just how difficult it was to track the vast variety of spending inside a company, from supplies to subscriptions to food and drink.

“Think about the hundreds of things that companies spend money on, and the way in which the management of that happens is a pretty broken process today,” he said. For starters, it usually involves some sort of approval request in a tool like Slack, Jira or Google forms.

Once approved, the person requesting the expense will put that on a company credit card, then have to submit expense reports at the end of each month using a tool like Expensify. If you purchase from a vendor, then that involves an invoice and that has to be processed and paid. Finally it would need to be reconciled and accounted for in accounting software. Each step of this process ends up being time-consuming and costly for an organization.

Kote’s idea was to take this process and streamline it by removing the friction, which he saw as being related to the disparate systems in place to get the work done. He believed by creating a single workflow on a unified, single platform he could create a smoother system for everyone involved.

He is putting that single system between the bank and the accounting system, including a virtual Airbase Visa card that can take the place of physical cards if desired. Request for spending happens inside Airbase instead of an external tool. When the virtual card gets charged, bookkeeping and reconciliation gets handled in Airbase and pushed to your accounting package of choice. 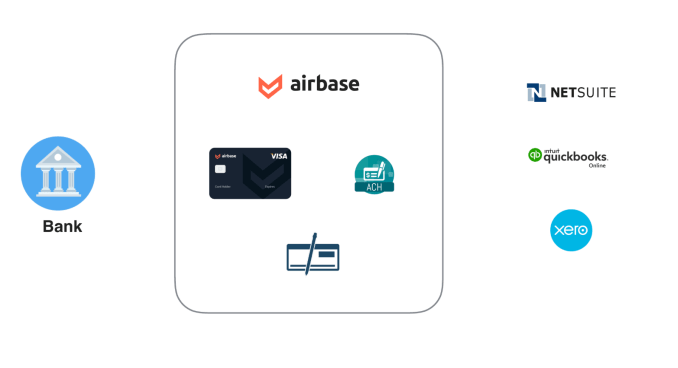 This could be a difficult proposition for companies with existing systems in place, but could be attractive to startups and small companies whose accounting systems have not yet hardened. Perhaps that’s why most of Airbase’s customers are startups or SMBs with between 50 and 1000 employees, such as Gusto, Netlify and Segment.

Bill Trenchard, general partner at lead investor First Round Capital, says he has seen very little innovation in this space and that’s what drew him to Airbase. “Airbase has taken a bold step forward to create an entirely new paradigm. It delivers a real solution to the biggest problems finance teams face as their companies grow,” Trenchard said in a statement.

The company was founded in 2017 and has 22 employees. It has a sales office in San Francisco, but other employees are spread across four countries.