Competition in the Chinese internet has for years been about who controls your mobile apps. These days, giants are increasingly turning to offline scenarios, including what’s going on behind the dashboard in your car.

On Tuesday, Alibaba announced at the annual Shanghai Auto Show that it’s developing apps for connected cars that will let drivers find restaurants, queue up and make reservations at restaurants, order food and eventually complete a plethora of other tasks using voice, motion or touch control. Third-party developers are invited to make their in-car apps, which will run on Alibaba’s operating system AliOS.

Rather than working as standalone apps, these in-car services come in the form of “mini apps,” which are smaller than regular ones in exchange for faster access and smaller file sizes, in Alibaba’s all-in-one digital wallet Alipay. Alibaba has other so-called “super apps” in its ecosystem, such as marketplace Taobao and navigation service AutoNavi, but the payments solution clearly makes more economic sense if Alibaba wants people to spend more while sitting in a four-wheeler.

There’s no timeline for when Alibaba will officially roll out in-car mini apps, but it’s already planning for a launch, a company spokesperson told TechCrunch.

Making lite apps has been a popular strategy for China’s internet giants operating super apps that host outside apps, or “mini-apps”; that way users rarely need to leave their ecosystems. These lite apps are known to be easier and cheaper to build than a native app, although developers have to make concessions, like giving their hosts a certain level of access to user data and obeying rules as they would with Apple’s App Store. For in-car services, Alibaba says there will be “specific review criteria for safety and control” tailored to the auto industry. 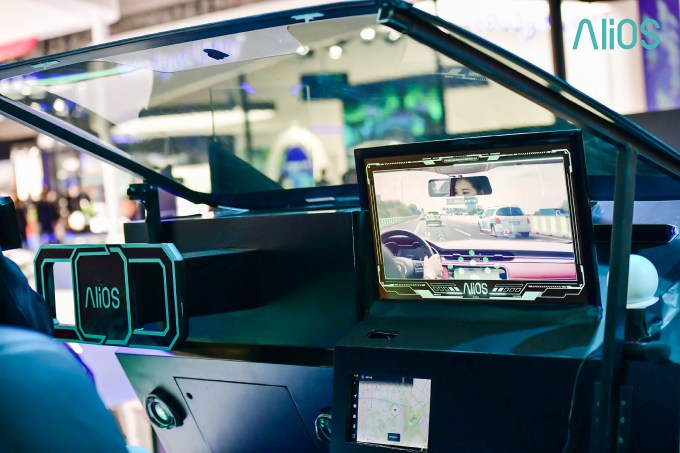 Alibaba’s move is indicative of a heightened competition to control the operating system in next-gen connected cars. For those who wonder whether the e-commerce behemoth will make its own cars given it has aggressively infiltrated the physical space, like opening its own supermarket chain Hema, the company’s solution to vehicles appears to be on the software front, at least for now.

In 2017, Alibaba rebranded its operating system with a deep focus to put AliOS into car partners. To achieve this goal, Alibaba also set up a joint venture called Banma Network with state-owned automaker SAIC Motor and Dongfeng Peugeot Citroen, which is the French car company’s China venture, that would hawk and integrate AliOS-powered solutions with car clients. As of last August, 700,000 AliOS-powered SAIC vehicles had been sold.

Alibaba competitors Tencent and Baidu have also driven into the auto field, although through slightly different routes. Baidu began by betting on autonomous driving and built an Android-like developer platform for car manufacturers. While the futuristic plan is far from bearing significant commercial fruit, it has gained a strong foothold in self-driving with the most mileage driven in Beijing, a pivotal hub to test autonomous cars. Tencent’s car initiatives seem more nebulous. Like Baidu, it’s testing self-driving and like Alibaba, it’s partnered with industry veterans to make cars, but it’s unclear where the advantage lies for the social media and gaming giant in the auto space.