Smart speakers’ global installed base is on track to top 200 million by the end of this year, according to a report out today from analysts at Canalys. Specifically, the firm forecasts the installed base will grow by 82.4 percent, from 114 million units in 2018 to 207.9 million in 2019. The U.S. will continue to lead in terms of smart speaker adoption, but a good portion of this year’s growth will also come from East Asian markets —  particularly China, the report says. 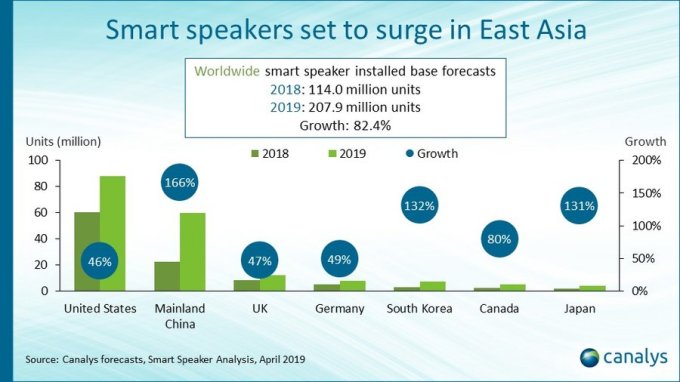 The market for China will also look much different from the U.S., where Amazon and Google today dominate. These companies don’t have a smart speaker presence in China. That means others — like Alibaba’s Tmall Genie, Xiaomi’s Xiao Ai, Baidu’s DuerOS and more — will gain traction instead. Canalys predicts Tmall will lead, with 39 percent of the 2019 smart speaker market share in mainland China, followed by 25 percent for Xiao Ai, 24 percent for DuerOS and 12 percent for all others. (Note that Canalys didn’t break out estimates for Apple HomePod in China, where it launched in January. But given its higher price point, it seems the firm isn’t predicting huge adoption at this time.)

“Local vendors are bullish about China’s smart speaker market, and their aim for this year is to keep growing their respective installed bases in the country by shipping more devices into households,” said Canalys senior analyst Jason Low. “Hardware differentiation is becoming increasingly difficult, and consumers have higher expectations of smart speakers and smart assistants. Vendors will need to focus on marketing the next-generation ‘wow factor’ for their respective smart assistants and voice services to change consumers’ perception and drive greater adoption,” he added. 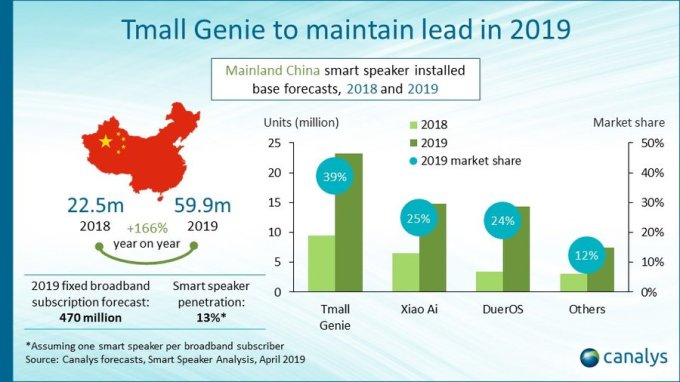 It’s worth noting, too, that the market for the voice assistants powering these smart speakers is even broader. For instance, Baidu announced in January 2019 that its DuerOS assistant has topped 200 million devices. This device base includes other things like home appliances and set-top boxes, in addition to smart speakers, however. And the worldwide market for voice assistants is on track to reach 8 billion by 2023, up from 2.5 billion in 2018, a report from Juniper Research said.

Canalys’ forecast follows news that smart speakers have hit critical mass in the U.S., where 41 percent of U.S. consumers now own a voice-activated speaker, up from 21.5 percent in 2017.

While most analysts firms are reporting rapid global growth for smart speakers, their individual forecasts may vary some. For example, Deloitte estimated the installed base for smart speakers will be even bigger — reaching more than 250 million units by the end of 2019, following 63 percent year-over-year growth. That would make smart speakers the “fastest-growing connected device category worldwide in 2019,” the firm said, and would see the total market worth $7 billion.

Canalys’ forecast agrees with this prediction, if not the exact numbers. Today, it also adds that smart speakers will top the install base of wearable bands (like smartwatches and fitness trackers) in 2019, and will overtake tablets by 2021.