Dashlane, a popular password manager and all-round identity management solution, has raised another $30 million in funding, the company announced today. The funding — this time a round of debt financing from Hercules Capital — follows prior investment from FirstMark Capital, Rho Ventures, Bessemer Venture Partners, TransUnion and Silicon Valley Bank.

The company is also expanding its board with the addition of Seth Farbman, a former CMO for Spotify and Gap.

Farbman spent nearly four years at Spotify as its chief marketing officer, exiting that position in January 2019. During his time there, Spotify grew to more than 200 million monthly actives. He now joins Dashlane as the password management app has topped over 10 million users — a milestone it hit last June. The service is now available in 11 languages and used in 180 countries worldwide.

Dashlane has also been expanding its product to include new features like Dark Web monitoring, which alerts users if their information is being passed around by hackers on the far reaches of the internet; and has added a VPN and identify theft protection. The goal with these features is to make Dashlane more than just a password management app, and to better differentiate itself from rivals like 1Password or LogMeIn’s LastPass.

“I am excited to join the board of Dashlane, a company with the right vision for the internet at the right time,” said Seth Farbman, in a statement. “I see many of the same attributes in Dashlane, as I did in Spotify, when I first joined—a best-in-class product that its customers love, a diverse and capable team focused on growth and innovation and powerful macro trends that put the wind at the company’s back. Technology is meant to empower people and make their lives easier, and that is at the very core of what Dashlane does,” he said. 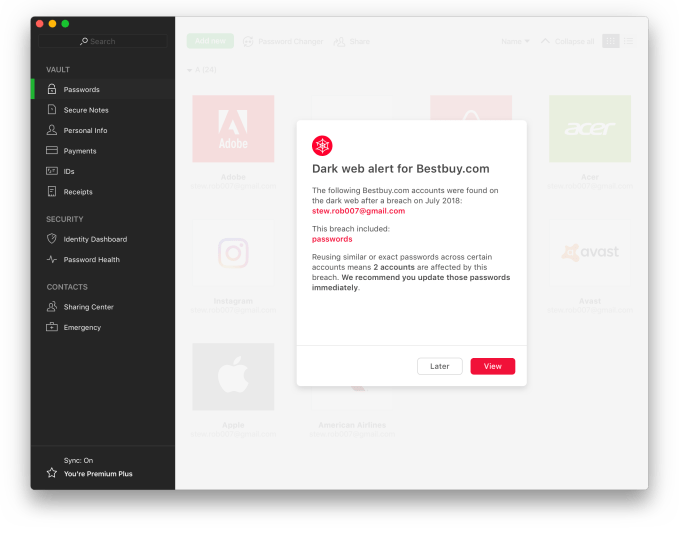 Password managers like Dashlane are today less of a “nice to have” option, and more of a “must” as data breaches and additional security measures — like complex passwords combined with 2FA — have become routine. It’s a lot for the average web user to keep up with, and native solutions like Apple’s Keychain aren’t often enough. That’s why it’s useful to have a program that helps to automate password changes, track compromised accounts, identify weak passwords and more.

People, broadly, are also more aware of their online privacy these days. That’s thanks, in part, to news coverage of Facebook’s privacy gaffes, security breaches and the changes to the way sites collect and use personal data, as required by Europe’s GDPR.

“When we look back 10 years from now, 2018 will be remembered as the year of GDPR, Facebook revelations, and the year that regulators, the press — and most importantly, public opinion — really started to look at the entire issue of digital privacy and identity differently,” said Emmanuel Schalit, CEO of Dashlane.

To date, Dashlane has raised more than $100 million in venture funding. However, with 10 million+ users, it’s still behind some competitors. LastPass, for instance, announced 16.8 million users in 2018. 1Password’s website, meanwhile, claims “millions” of individual users and 40,000 businesses — a number that implies it reaches a large number of employees, thanks to its B2B deals. And of course it still has to convince people who use the built-in password features of today’s browsers that it’s worth having a more complete solution, rather than just a tool to remember passwords.