For the first time in years, Netflix is no longer the top grossing, non-game mobile app. Instead, that title now goes to dating app Tinder. The change in position is not surprising, given Netflix’s decision in December to stop paying the so-called “Apple tax.” That is, it no longer allows new users to sign up and subscribe to its service through its iOS application.

The change was said to cost Apple hundreds of millions in lost revenue per year, given that Netflix’s app had been the world’s top-earning, non-game app since Q4 2016. Now, instead of giving up its 15 to 30 percent cut of subscription revenue, new users have to sign up through Netflix’s website before they can use the app on mobile devices, including both iOS and Android. (Netflix had dropped in-app subscriptions on Android earlier.)

App store intelligence firm Sensor Tower estimated Netflix had earned $853 million in 2018 on the iOS App Store. A 30 percent cut would have been around $256 million. However, after the first year, subscription apps only have to pay out 15 percent to Apple. But Netflix had a special deal, according to John Gruber — it only had to pay 15 percent from the get-go.

In any event, it’s still a large sum. And one large enough to end Netflix’s reign at the top of the revenue charts. 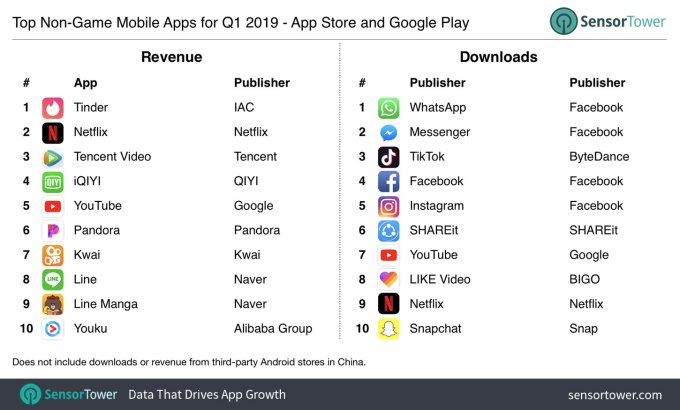 Meanwhile, Tinder’s revenue climbed. In the first quarter, it saw revenue grow by 42 percent year-over-year, to reach $260.7 million across both stores, up from $183 million in Q1 2018, the firm also found.

That put it at the top, according to both Sensor Tower’s new data and App Annie’s recent estimates.

Meanwhile, the top downloaded, non-game apps in the quarter were largely those focused on social media, messaging and video. This included, in order: WhatsApp, Messenger, TikTok, Facebook, Instagram, SHAREit, YouTube, LIKE Video, Netflix and Snapchat.

To date, Sensor Tower has seen the app installed more than 1.1 billion times. (But keep in mind that’s not total users — many people install it on multiple devices. Nor is it monthly active users. On that front, the app has 500 million monthly actives as of the end of its third quarter 2018.)

TikTok also did well on the revenue side thanks to in-app purchases, though not well enough to start ranking in the top charts. User spending was 222 percent higher in Q1 2019 versus Q1 2018, reaching an estimated $18.9 million worldwide. 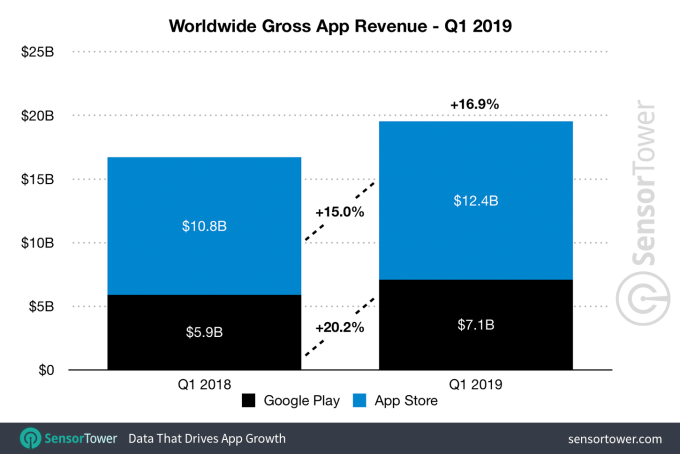 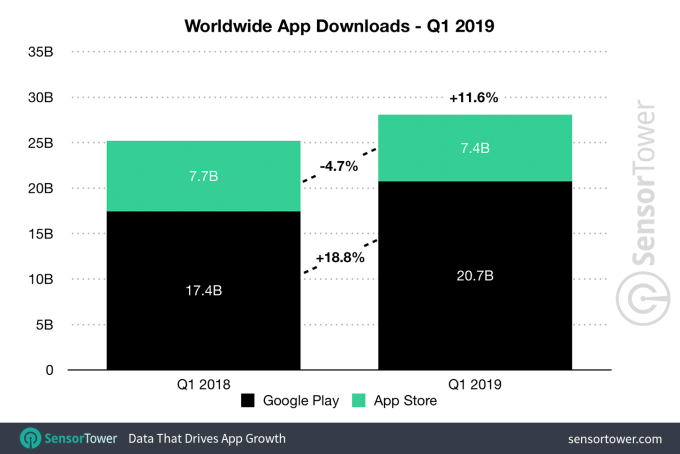