The amount of research that gets published is more than any scholar can hope to keep up with, but soon they may rely on an AI companion to read thousands of articles and distill a summary from them — which is exactly what this team at Goethe University did. You can read the first published work by “Beta Writer” here… though unless you really like lithium-ion battery chemistry, you might find it a little dry.

The paper itself is called, in creative fashion, “Lithium-Ion Batteries: A Machine-Generated Summary of Current Research.” And it is exactly what it sounds like, some 250 pages of this:

But as interesting as battery research is, it is only tangential to the actual purpose of this project. The creators of the AI, in an extensive and interesting preface to the book, explain that their intent is more to start a discussion of machine-generated scientific literature, from authorship questions to technical and ethical ones.

In other words, they aim to produce questions, not answers. And questions they have in abundance:

Who is the originator of machine-generated content? Can developers of the algorithms be seen as authors? Or is it the person who starts with the initial input (such as “Lithium-Ion Batteries” as a term) and tunes the various parameters? Is there a designated originator at all? Who decides what a machine is supposed to generate in the first place? Who is accountable for machine-generated content from an ethical point of view?

Having had robust debate already among themselves, their peers, and the experts with whom they collaborated to produce the book, the researchers are clear that this is only a beginning. But as Henning Schoenenberger writes in the preface, we have to begin somewhere, and this is as good a place as any.

Truly, we have succeeded in developing a first prototype which also shows that there is still a long way to go: the extractive summarization of large text corpora is still imperfect, and paraphrased texts, syntax and phrase association still seem clunky at times. However, we clearly decided not to manually polish or copy-edit any of the texts due to the fact that we want to highlight the current status and remaining boundaries of machine-generated content.

The book itself is, as they say, imperfect and clunky. But natural-sounding language is only one of the tasks the AI attempted, and it would be wrong to let it distract from the overall success. 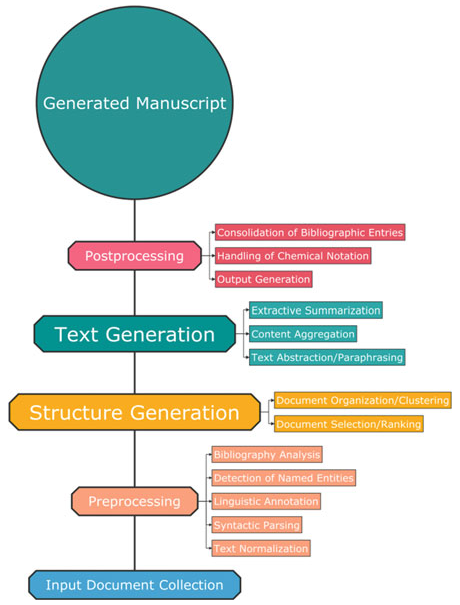 This AI sorted through thousands upon 1,086 papers on this highly technical topic, analyzing them to find keywords, references, takeaways, ” pronominal anaphora,” and so on. The papers were then clustered and organized according to their findings in order to be presented in a logical, chapter-based way.

Representative sentences and summaries had to be pulled from the papers and then reformulated for the review, both for copyright reasons and because the syntax of the originals may not work in the new context. (Experts the team talked to said they should stay as close to the meaning of the original as possible, avoiding “creative” interpretations.)

Imagine that the best sentence from a paper starts with “Therefore, it produces a 24 percent higher insulation coefficient, as suggested by our 2014 paper.”

The AI must understand the paper well enough that it knows what “it” is, and in recasting the sentence, replace “it” with that item, and know that it can do away with “therefore” and the side note at the end.

This has to be done thousands of times and many edge cases pop up where the model doesn’t handle it right or produces some of that admittedly clunky diction. For instance: “That sort of research’s principal aim is to attain the materials with superior properties such as high capacity, fast Li-ion diffusion rate, easy to operate, and stable structure.” Henry James it isn’t, but the meaning is clear.

Ultimately the book is readable and conceivably useful, having boiled down probably ten thousand pages of research to a much more palatable 250. But as the researchers say, the promise is much greater.

The goal here, which doesn’t seem far fetched at all, is to be able to tell a service “give me a 50-page summary of the last 4 years of bioengineering.” A few minutes later, boom, there it is. The flexibility of text means you could also request it in Spanish or Korean. Parameterization means you could easily tweak the output, emphasizing regions and authors or excluding keywords or irrelevent topics.

These and a boatload of other conveniences are inherent to such a platform, assuming you don’t mind a rather stilted voice.

If you’re at all interested in scientific publishing or natural language processing, the preface by the authors is well worth a read.