It’s been a year since All Raise emerged with the support of dozens of venture capital’s most powerful women. The 34 founding members had a lofty goal: Double the capital going to female founders in five years and double the representation of female VCs in 10 years.

After a few experiments, some trial and error and the first-of-its-kind Women Who Venture Summit, All Raise cemented its reputation as a force for change in Silicon Valley. In the last 12 months, the organization has connected high-profile VCs with female founders through its Female Founder Office Hours, lifted up founders who value diversity with the Founders for Change campaign and connected male general partners with nascent female investors with its VC Champions program. Now, the 501(c)(3) is ready for its next act. As part of a push to formalize the organization and garner more support in the form of cash, All Raise has hired its first chief executive officer, seasoned Silicon Valley operator Pam Kostka (pictured). Kostka — the former CEO of Loop, a now-defunct social media app for college students, and of the Andreessen Horowitz-backed startup Bluebox Security — joins just one other full-time All Raise employee, director of communications Steffi Wu, who joined at the beginning of March after six years at Gusto.

They are hunting for office space in San Francisco large enough to fit their growing team — All Raise plans to hire five to six people imminently — and to host events that can accommodate all their members. For now, they are establishing temporary offices at various partner VC firms. When I met with Kostka and Wu last week, they were operating out of a conference room inside Reach Capital’s San Francisco office.

Kostka and Wu are working a lot of nights and weekends, too, they said, because that’s when the rest of the All Raise community, a group of busy, full-time investors, are able to draft feedback to initiatives and otherwise offer direction: “We are two people, and yet we have these amazingly connected, capable resources who amplify the organization. It’s amazing,” Kostka told TechCrunch during a sweeping conversation on All Raise’s future plans, edited below for brevity and clarity.

All Raise appears lean, but its founders, including Cowboy Venture’s Aileen Lee, Sequoia Capital’s Jess Lee and Forerunner Venture’s Kirsten Green, are passionate and committed. Aileen Lee tells TechCrunch Kostka was the person they were waiting for after a lengthy, nine-month CEO search. “She’s product-oriented, with business savvy and a history of scaling with a small team. She can take All Raise to the next level,” Lee said.

“What we are trying to do is quite different than other nonprofit models,” Lee explained. “If we are lucky, it might have some similarities to TED. TED has a big conference where they bring together a lot of people and share lots of ideas, and you can go to TED.com and watch a talk. We want to make All Raise accessible like that so people can learn from us and be inspired, or they can host a workshop or a book club regardless of where they are.”

Lee says part of All Raise’s maturation and expansion efforts include a heightened focus on diversity, something she admits the organization hasn’t spent enough time on. Backstage Capital’s Lolita Taub and Zume Pizza co-founder Julia Collins are leading this effort through an All Raise intersectionality task force. Meanwhile, as All Raise ruminates on national and, eventually, international expansion plans, it’s looking to its members to offer their expertise where appropriate. Dream Machine founder and former TechCrunch editor-in-chief Alexia Bonatsos, for example, is donating her journalism chops to help All Raise hone its content strategy. 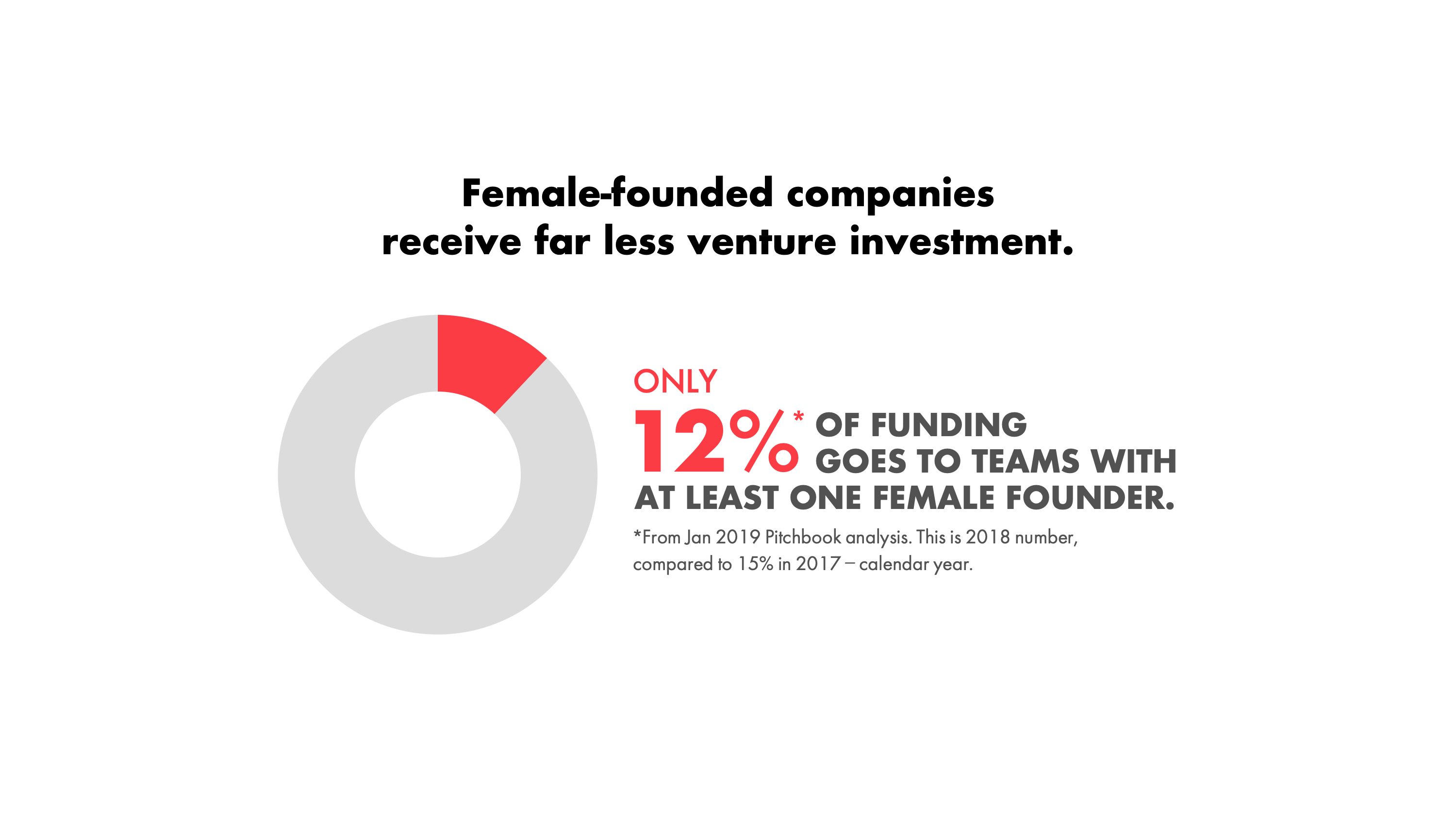 The VC and startup ecosystem is bound to see a lot more unfold this year, as Kostka puts All Raise’s growth efforts into overdrive. Here’s more from TechCrunch’s chat with All Raise’s first-ever CEO.

Kate Clark: All Raise is a nonprofit organization, but it walks and talks like a startup…

Pam Kostka: Yes, we run it like a startup, which is how it ties into my background. It feels very startup-oriented. We have key objectives, we have OKRs that we’re implementing, we’re using a lean process methodology of testing, refine, pilot, test, refine, pilot, test, refine before we roll things out. There’s probably way more going on under the covers right now than is actually visible. We’ll be rolling a lot out in 2019.

KC: Sounds like you’re at the right place then. Still, All Raise is a 501(c)(3), not a for-profit business. What made you decide to leave the startup world behind?

PK: I hit a milestone birthday a while ago and I thought, what is it that I want to do with my next 10 to 15 years in Silicon Valley? What is the most important work that I could do? I really wanted to do something that was personally meaningful to me and I had been following All Raise since their launch. I don’t think you can be a woman in Silicon Valley without being tied to this cause. For me, there’s no more meaningful thing I could be dedicating my time to and it kind of pays back some of the success and support I’ve had throughout my career, and I hope to amplify that for generations to come. I have a nine-year-old daughter. She’s interested in STEM. Should she elect to come in this direction, I want it to be different for her.

KC: When did you come to Silicon Valley?

PK: I started my career here over 20 years ago, in 1995 — the dot-com era — and I did a series of roles at different startups, from product management to marketing to sales, usually on the enterprise side, but really focusing on companies that were doing something disruptive. [All Raise] is probably one of the biggest challenges that I’ve taken on because it’s not about changing a company or changing an industry but changing an ecosystem.

KC: Now that All Raise has its first CEO, does it have big hiring plans?

PK: We are absolutely going to hire more people. So there’s one open position right now that’s actively being recruited, which is for a data strategist. We think data is core to what we do. We need to report on the numbers and how we are doing and how we’re impacting and moving the needle for women in VC and female funding. 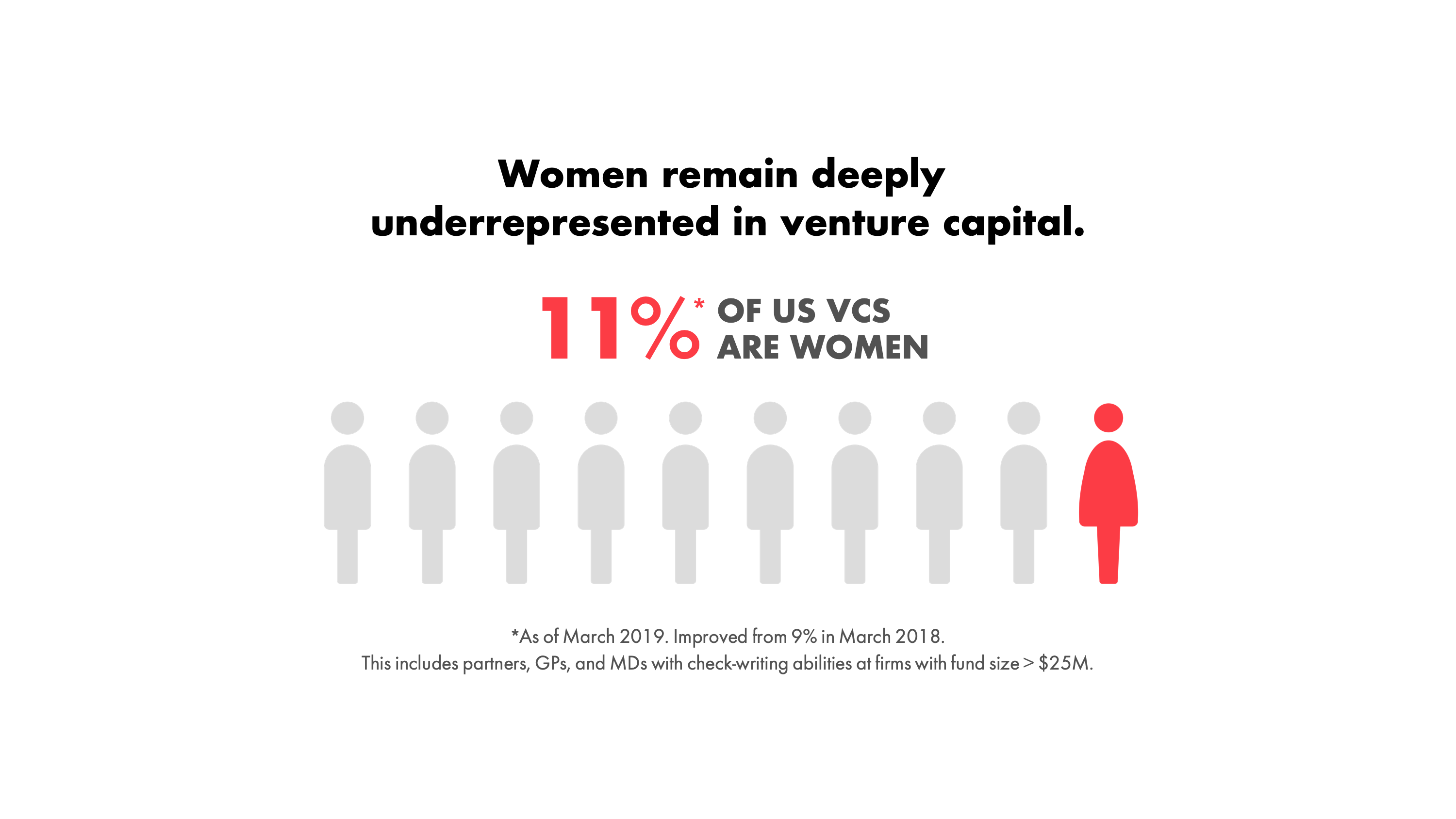 KC: I know All Raise brought in $4 million in donations last year from Melinda Gates via Pivotal Ventures, Silicon Valley Bank, EY and some others, but are there any plans to raise additional capital?

PK: Yes, the intent is in a couple of months, once I have my sea legs underneath me, to go back out and raise. I’ve been a fundraiser and I think part of my appeal was that I could understand what it means to sit in the operator chair, as well as to be able to interact with the venture community. I have empathy for both sides of the equation and I’ve also personally experienced the struggles of being a woman in tech trying to raise money.

PK: So right now we’re focused on both the funders and the founders, and providing all kinds of programs, initiatives, education and outreach that really helps women in these two communities rise, but that also brings these two communities together in more meaningful ways. That’s what the short-term focus is and there are lots of things that we’re considering for the long term. This year, you’ll see a lot of the work that was invested in 2018 come to fruition and be exposed.

KC: Last year, All Raise hosted its inaugural Women Who Venture Summit, which I’ve been told was an incredibly magical and historical moment that put more female VCs in the same room than ever before. Will that return in 2019?

PK: Yes, we’re planning to bring that event back and amplify it even more. It was great and I call it a great Year One. We’re now going through all of our lessons learned from that and trying to widen it. I think there were 400 people who were able to attend that event. We want to make a bigger event and invite more and more people and be that kind of inclusive tent under which everybody can come. We’re also going to be doing a parallel one for founders and then trying to weave those two groups together, again, to create this empathy between these two entities. It’s an absolutely seminal event and you’ll see us doing it on an annual basis going forward.

10 of All Raise’s 32 founding members

KC: How do you feel about the state of funding for women entrepreneurs and the number of women in venture?

PK: I think it’s no coincidence that All Raise started a year ago and we’ve since moved the needle, but we’re not done, not by a long shot. In 2018, we moved from 9 percent representation of female investing partners to 11 percent. That being said, of the 720 venture firms in the United States, 70 percent still don’t have a single female partner around the table.

KC: Let’s talk about diversity. All Raise has supported hundreds of women, but the majority of VCs are white and Asian. Can All Raise do more to promote other underrepresented groups?

PK: We need to have more diversity around the table. By doing that, we’re going to uncover opportunities we just don’t have right now because we’re not reflective of the population. Intersectionality is one of our initiatives moving forward in 2019 and it’s a big one. It’s one that’s important to me; I’ve enjoyed privileges that just aren’t accessible to women of color. So we’ve actually started an intersectionality working group within our organization with Julia Collins [co-founder of] Zoom Pizza and Lolita Taub from Backstage Capital. Those two are helping us determine a whole series of programs and initiatives, events and partnerships that can bring intersectionality into our conversation. 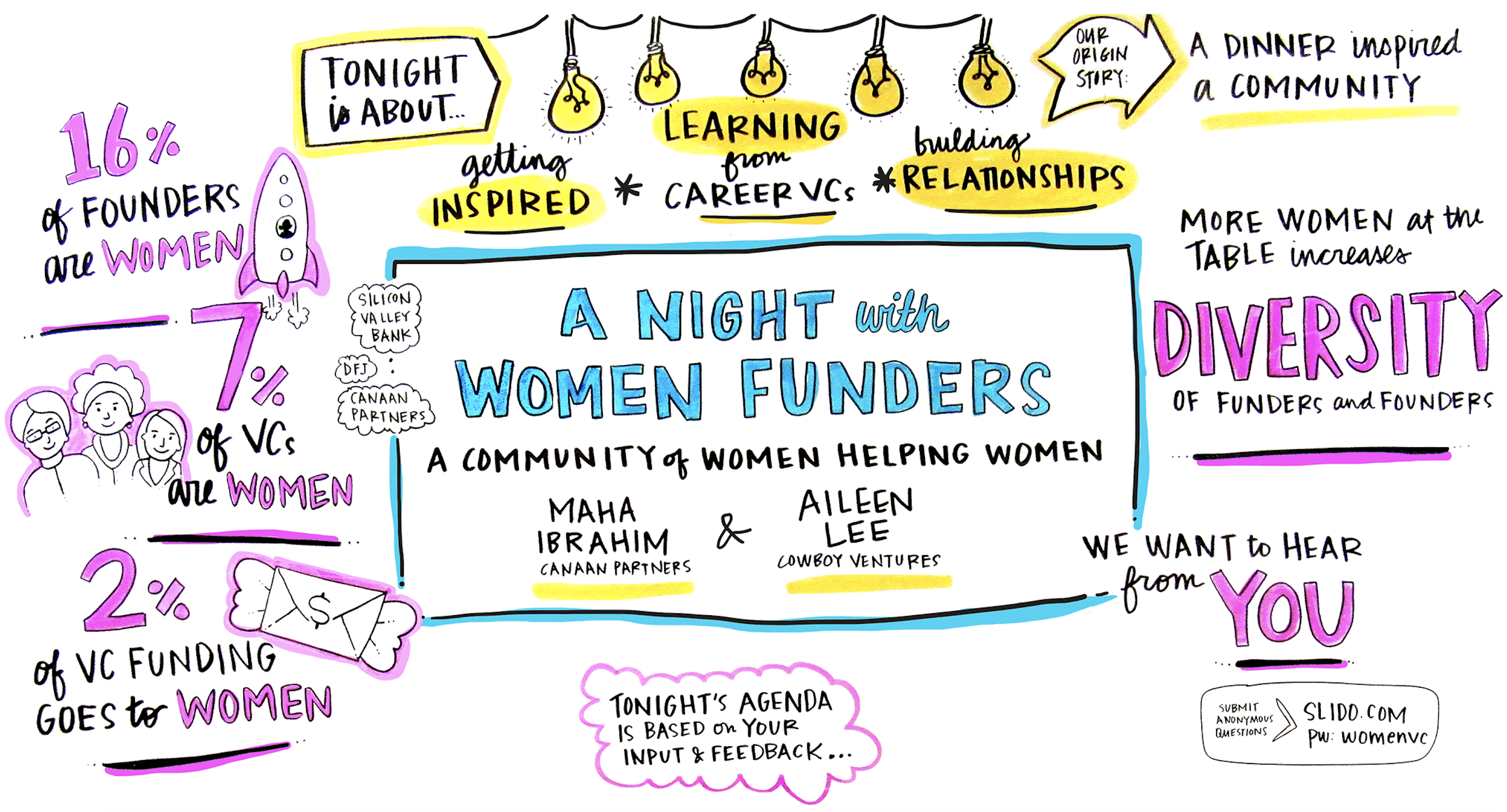 Promotional materials for an All Raise event in 2018

PK: To bottle up and amplify this community. I think there’s a stereotype out there that women don’t help women. There is some of that that does happen in pockets, and understandably so. But there was something so special every time I interviewed and came in for the job at All Raise. I just felt this kind of warm embrace that left me thinking, where have you all been my entire life. I would attend all these meetings and just walk away with this feeling like if you had been in my career, I would have felt way less lonely, way less alone. And I would have had this network of people to go ask questions, get advice from and who could have helped me in my career.

KC: Where would you like to see All Raise in five years?

PK: I’d like to see us hitting our metrics and our goals. We have these two key initiatives, which is to double the representation of female VCs around the table in 10 years and to double the funding that’s going to woman in five years. We’ve got to keep on driving towards those goals and we’re measuring ourselves every day.

KC: Where did All Raise get all this momentum? Why now?

PK: There was a group of women who were tired of the status quo, who were looking around and seeing the headlines and said, it’s time to do something. I’ve seen the email streams, it was instantaneous, the response [Aileen Lee] got from her female peers. It’s so night and day from when I came to Silicon Valley in 1995 to now. I don’t think we’re in a moment. I think we’ve created a movement.