Flying cars definitely sound cool, but whether they’re actually a good idea is up for debate. Fortunately they do seem to have some surefire benefits, among which you can now count improved efficiency — in theory, and on long trips. But it’s something!

Air travel takes an enormous amount of energy, since you have to lift something heavy into the air and keep it there for a good while. This is often faster but rarely more efficient than ground transportation, which lets gravity do the hard work.

Of course, once an aircraft gets up to altitude, it cruises at high speed with little friction to contend with, and whether you’re going 100 feet or 50 miles you only have to take off once. So University of Michigan researchers thought there might be a sweet spot where taking a flying car might actually save energy. Turns out there is… kind of. The team published their results today in Nature Communications.

The U-M engineers made an efficiency model for both ground transport and for electric vertical take-off and landing (VTOL) aircraft, based on specs from aerospace companies working on them.

Lift Aircraft’s Hexa may be your first multirotor drone ride

They looked at how these various theoretical vehicles performed when taking various numbers of people various distances, comparing energy consumed.

As you might imagine, flying isn’t very practical for going a mile or two, since you use up all that energy getting to altitude and then have to come right back down. But at the 100-kilometer mark (about 62 miles) things look a little different.

For a 100 km trip, a single passenger in a flying car uses 35 percent less energy than a gas-powered car, but still 28 percent more than an electric vehicle. In fact, the flying car is better than the gas one starting at around 40 km. But it never really catches up with the EVs for efficiency, though it gets close. Do you like charts? 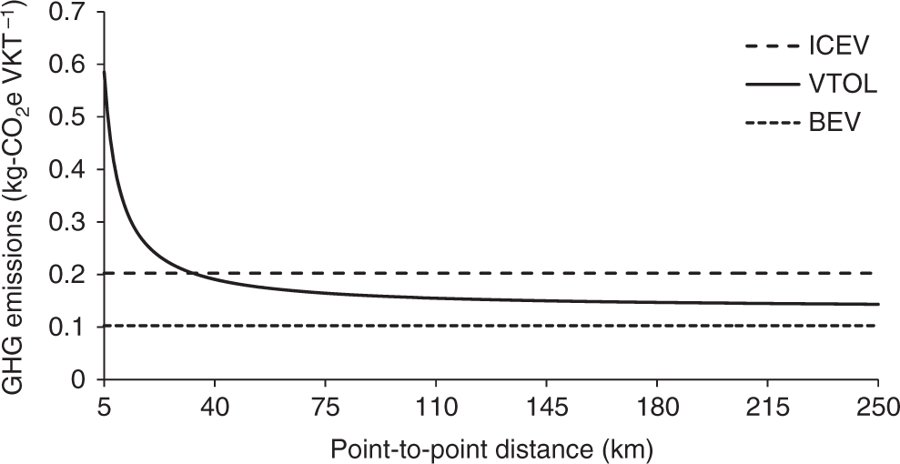 To make it better, they had to juice the numbers a bit bit, making the assumption that flying taxis would be more likely to operate at full capacity, with a pilot and three passengers, while ground vehicles were unlikely to have their average occupancy of 1.5 people change much. With that in mind, they found that a 100 km trip with three passengers just barely beats the per-person efficiency of EVs.

That may seem like a bit of a thin victory, but keep in mind that the flying car would be making the trip in likely a quarter of the time, unaffected by traffic and other issues. Plus there’s the view.

It’s all theoretical right now, naturally, but studies like this help companies looking to get into this business decide how their service will be organized and marketed. Reality might look a little different from theory, but I’ll take any reality with flying cars.