Spotify is launching new analytics tools to help artists and their teams better understand how well their ads are working. The company today says it’s rolling out new streaming conversion metrics that will show how Spotify listeners reacted to a particular ad campaign — whether they clicked through to listen, saved the music or added it to a playlist, for example.

The new tools also can detail whether the campaign did better with existing fans who have been streaming the music already, or if an ad worked to hook new fans.

The conversion metrics are being introduced to the Spotify Ad Studio. First launched in 2017, the ad studio is a self-serve platform that allows artists and their labels to share their music by way of short (30-second or less) audio ads that are played for the free users on the Spotify app. These ads are served during ad breaks between songs, and offer an image and URL for a single of the artist’s choosing.

Artists also can use the platform to create ads for concerts, merchandise and other non-music content.

Before, the Ad Studio’s metrics offered general insights — like the age, gender or genre preferences of the audience being served the ad, for example, and how many clicks the ad was seeing. 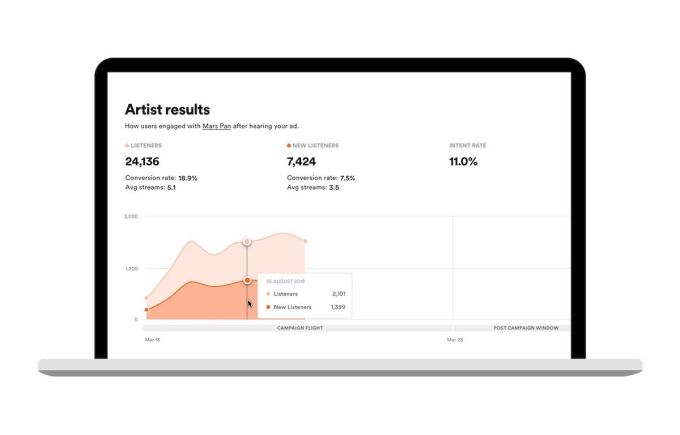 But labels and their artist teams have been asking for more.

They didn’t want to just see who was clicking and how many clicks, but also what happened next — including whether ads were working to turn listeners into fans who take some action, like saving a song or adding it to a playlist. Those sorts of actions indicate the user plans to listen again. This is particularly important to emerging artists who are trying to grow their fan base and rely on ads to get the word out.

“This is the reporting we’ve been wanting to see,” said Jimmy Brunetti, VP of Marketing at independent label services company Croshal Entertainment Group, in a release. “I really like how it gives us an indication about how our ads drive deeper actions. That’s promising for an artist, especially newer artists with room to grow.”

“With Spotify’s new advertising capabilities, we’re getting insight into not just how our campaign is resulting in streams, but deeper actions for an artist like how those listeners are turning into fans and adding a song to their playlist or hearting a song. Those are the holy grail of metrics for an artist to know,” added Conor Clarke, CEO and co-founder of Wavo, a music marketing agency that worked with Rich the Kid.

Using the new tools, the agency said they were able to see that 38 percent of people who heard the ad went on to listen to the artist, and nearly 20 percent of those listeners streamed his music for the first time that month.

The new ad tools are the latest of several releases focused on giving artists more control. This, in turn, helps to keep artists using Spotify as their main platform for reaching music listeners, growing their fan base and boosting their popularity — and more broadly, their revenues.

In September 2018, Spotify announced indie artists could upload their own tracks. It then launched a playlist submission feature that would help artists flag their songs for editorial consideration, and took a stake in music distribution service DistroKid to make cross-platform uploads easier.

More recently, the company turned some of the programmed playlists over to its personalization algorithms — meaning users would each see their own version of things like “Happy Hits” or “Dance Party,” for example. As a result, artists can now grab a custom URL pointing to these personalized versions of the playlist in order to share the playlist on social media and elsewhere.