The popular TechCrunch podcast Equity this week launched a new series called Equity Dive, wherein a host interviews the writer of the latest edition of the Extra Crunch EC-1.

If you’ve ever wanted to know everything there is to know about Patreon, the platform that connects creators with fans and their wallets, then this is the show for you. TechCrunch Silicon Valley editor Connie Loizos speaks with Eric Peckham who spent hours upon hours meeting with the Patreon team to learn its origin story and the ins and outs of its business practices to get the company to where it is today. 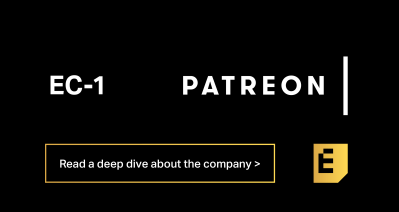 The way to think about how Patreon has evolved is I see it in kind of three stages, which was this initial crowd funding platform, and then evolving beyond that to try and be a destination platform for consumers where there would be great content that you just go to Patreon to find and you go to discover creators, kind of a marketplace model. They moved away from that. That was somewhat of a gradual shift and essentially the decision was it’s not good to be stuck in this game of trying to be yet another destination platform for consumers competing with YouTube and Instagram and every single media site out there. Really the opportunity and mission underlies our work is about helping creators and enabling all these independent creators to sustain themselves and to build thriving businesses.

They shifted, they now describe themselves as a SaaS company actually, which is very different from framing yourself as kind of a consumer destination. The long and short of it is they see this opportunity, which is a growing market of independent creators around the world who are building fan bases, and for that particular type of SMB they want to provide essentially the full suite of tools and services that they need to run their businesses.

For access to the full transcription, become a member of Extra Crunch. Learn more and try it for free.

Connie Loizos: Hi, I’m Connie Loizos and I’d like to welcome you to our first Equity Dive. Once a month we’re going to be dedicating an entire episode to a deep dive into the life of one company. This month I’m joined by Eric Peckham, who has reported extensively on the crowd funding membership platform Patreon. Hi Eric.

Eric Peckham: Hey Connie, excited to be here for the first Equity Dive.

Connie Loizos: Same, so Eric you and I ran into each other first in Berlin but we don’t know each other very well. I’d love to hear more about you. You’re based in LA, and from what I understand you are a media industry analyst. Is that correct?

Connie Loizos: Well I read your extensive coverage on Patreon and it was really impressive, and I wondered considering how much you wrote, is this sort of a long interest of yours this company or how did you decide to settle on this for your first deep dive for TechCrunch?

Eric Peckham: Yes, it was an exciting process digging into this. We made a short list of exciting companies, a lot of unicorn companies or late stage startups we thought were about to become unicorns, and Patreon jumped out for a number of reasons. One is as someone who runs his own newsletter I have had subscribers to that newsletter suggest creating a Patreon. I’ve looked into it before, so I had a little bit of a creator perspective of just wanting to better understand Patreon and other options in the market. I think from a bigger picture, more of a Silicon Valley perspective, Patreon’s a really fascinating company. They’ve raised over $100 million from top PC firms like Index, CRV, they’re the dominant player in this space they’re targeting, but it’s kind of them versus just the big social media platforms. There isn’t the startup that’s comparable in size to it and it’s really trying to own this whole territory of independent content creators, surveying them with different business tools or services.

Connie Loizos: It is really interesting to think the David and Goliath story involves a $100 million venture backed startup versus, as you say, I know these big players Facebook, YouTube. Let’s start at the beginning, so you decided on Patreon for reasons that I can certainly understand now. How did you set about pitching them on this idea? Because obviously you were going to need a lot of access to them, a lot of their time.