Insurance policies are confusing as hell, but the basic business proposition is pretty simple. For policyholders, it’s a way to get paid if something bad happens. And for insurers, it’s a way to make money charging people who avert disasters.

Given that many major insurance companies have stayed in business a century or more, it has clearly been a successful formula for those who write the policies. While other industries fall prey to the forces of creative disruption, giant insurers have largely managed to remain giant and profitable.

In the past few years, however, a surge of well-funded startups are scaling up insurance-focused offerings. Venture funding for insurance and insuretech companies hit all-time highs in 2018, according to Crunchbase data, with both global and U.S. totals reaching record levels. A space that once attracted a few hundred million in venture investment is now in the multiple billions.

Insuretech is seeing some massive rounds, too. And while traditional venture firms are active in the space, a surprisingly large portion of funding is coming from the corporate venture arms of the very same giant insurance companies startups are trying to disrupt.

“I think what it comes down to is insurance is viewed as a grand slam opportunity,” said Caribou Honig, chairman of the InsureTech Connect conference series and a former founding partner at venture firm QED Partners. “The venture community says prices are not cheap, but if we can find opportunities, this is a massive space.”

Below, we get up to speed on recent funding data, muse at the valuations, look at the active players and speculate about why we haven’t seen more exits.

A few more deals, but a lot more money

First, let’s talk about the rising cost of insurance deals.

People complain when their insurance payments go up a few bucks. That’s nothing compared to what insurance startup investors have to confront.

Valuations for sought-after startups are on a tear, and round sizes are ballooning as well. In all, U.S. insurance and insuretech startups raised just over $2.5 billion in 2018, more than double 2017 levels. Global investment, meanwhile, was just shy of $4 billion.

We lay out the funding spike in chart-form below, looking at round counts and investment totals in the U.S. 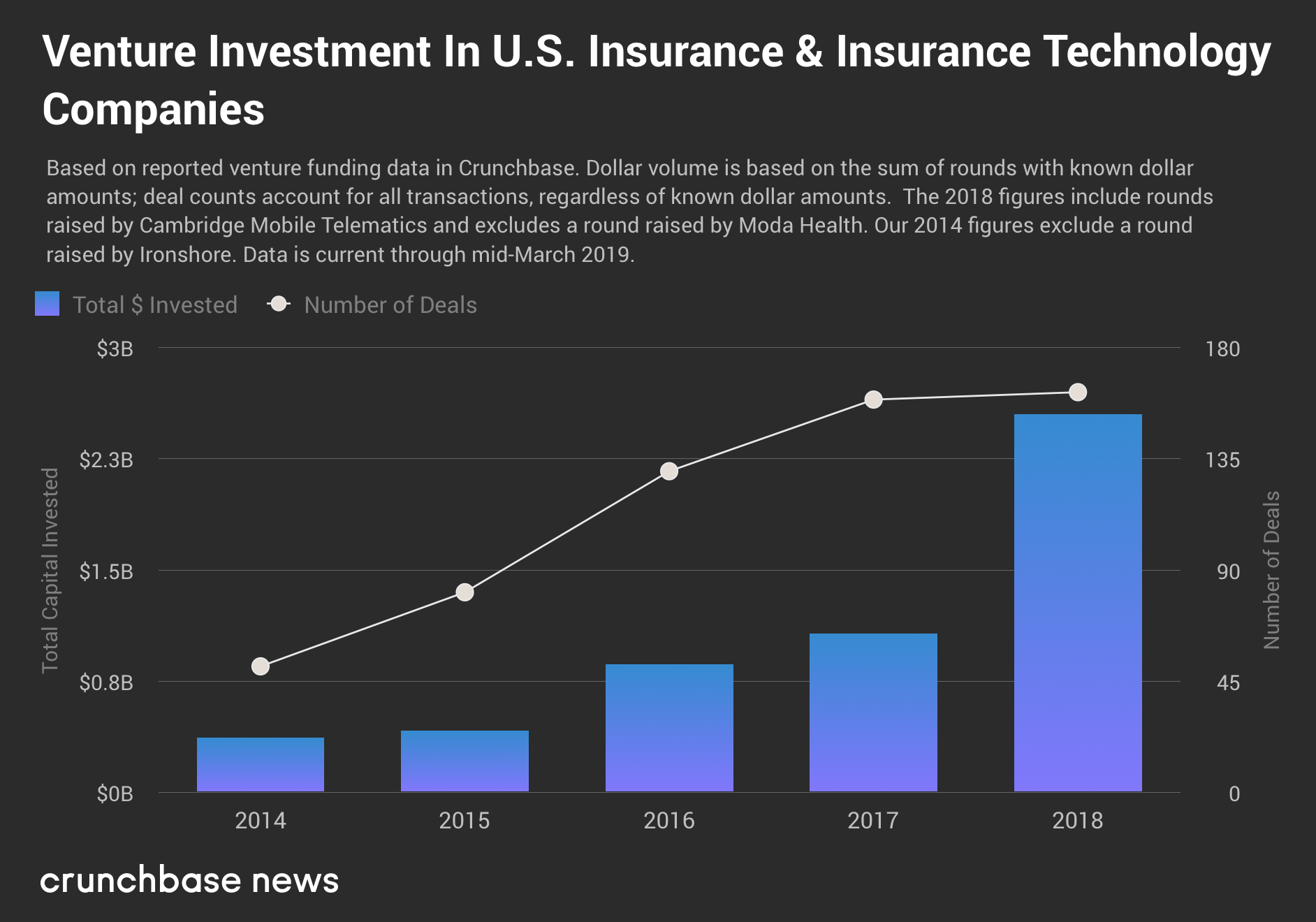 And here are the five-year totals for the global market (including the U.S.). 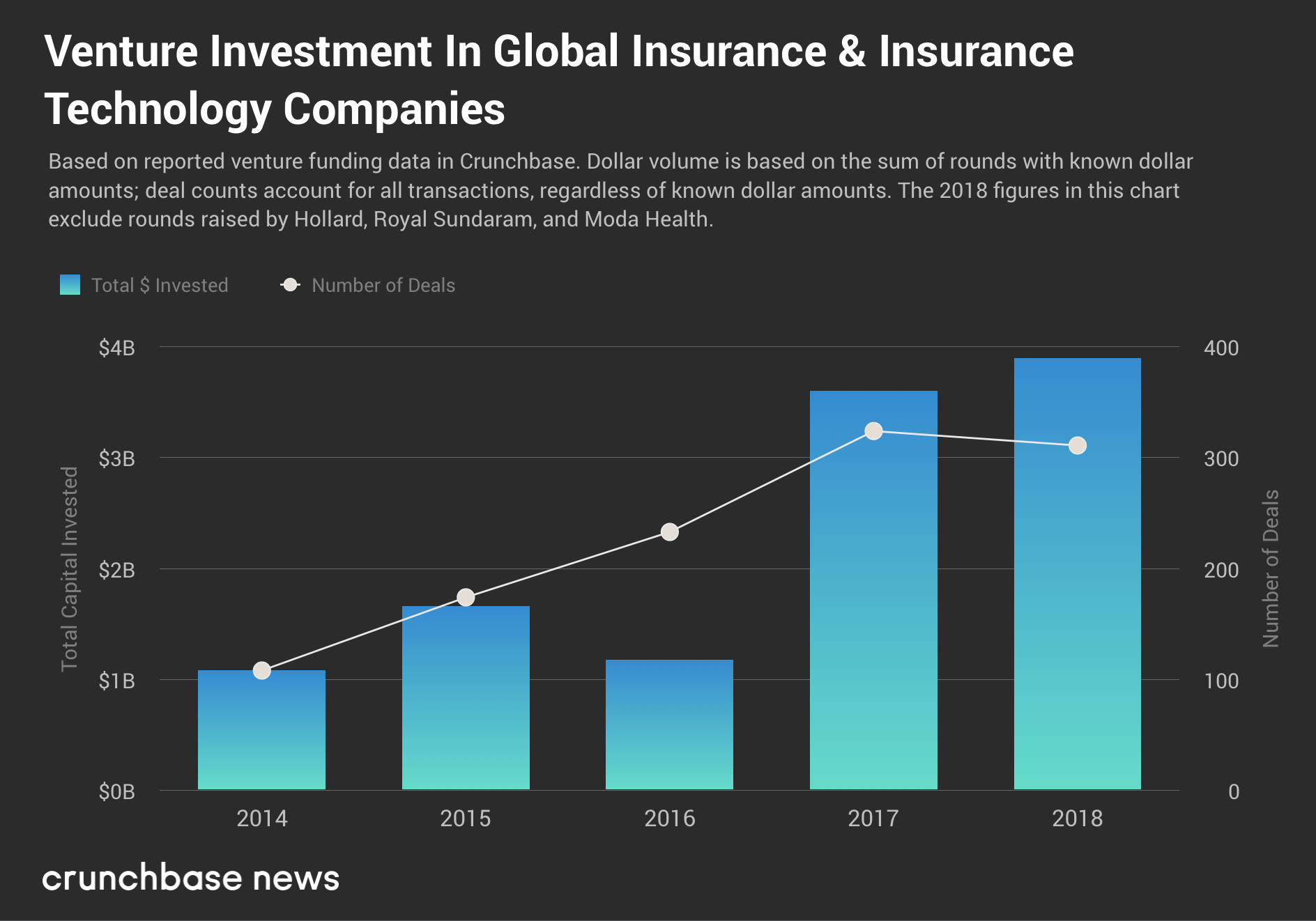 A huge wave of seed-stage insurance startups launched three or four years ago, Honig said, and that’s one of the reasons average round sizes are rising so much. Hot companies in that cohort are rapidly maturing, and they’re seeking ever-larger later-stage rounds.

In the U.S., nearly 50 insurance or insuretech companies raised rounds of more than $10 million, including some supergiant financings. We look at some of the largest global funding recipients below:

The trend of incumbent insurance companies launching or scaling up venture arms started a few years ago, and it’s been accelerating.

Overall, the investors on the list are getting more active. In 2018, they participated in 42 known funding rounds, with an aggregate value around $630 million. In 2017, by comparison, they backed 34 rounds with around $400 million in aggregate value.

Some of New York Life’s most recent deals, for instance, include Carrot, developer of a smoking-cessation platform, and Trifacta, a data analysis software startup. The corporate venture fund also had a profitable exit two years ago with the sale of Skycure, a mobile security provider, to Symantec. These, Albarella said, are all examples of companies with technologies of interest to insurers that have applications in other sectors as well.

“There’s clearly a price premium on deals in which a CVC is involved,” he said. And there’s no shortage of capital.

With all the money going into insurance startups, one might think we’d see money coming out. However, that hasn’t really been the case, at least for U.S. startups.

A few companies with technologies applicable in the insurance industry have secured solid exits. But so far, none of the really heavily funded pure-plays (think Oscar Health or Metromile) have gone the M&A or IPO route.

If poetic justice applied in the real world, we’d see insurance startup investors reaping gains on their investments only after something really bad happened. Even then, only after they filed reams of paperwork and spent hours on hold.

A more realistic scenario, at least in Honig’s view, is that we will see a few really, really big exits, but probably not in the next few quarters. For now, fast-growing insurance-focused startups can easily raise capital in the private markets. In most cases, companies would prefer more time to build their brands, raise revenues and get their books in order before attempting an IPO.

As for M&A, we haven’t seen a lot of big insurance startup acquisitions. Again, Honig speculates that insurers are mostly still in watch-and-wait mode, as the current crop of startups matures.

That said, we have seen some big deals involving startups that don’t seem like obvious insurance deals. One Honig pointed to is Ring, the smart doorbell maker acquired by Amazon last year for $1 billion. The company’s IoT technology has applications for homeowners insurance, Honig said, and Ring counted insurer American Family among its backers.

For now, insuretech venture investors are largely holding on, hoping valuations will continue to rise.