Skype is capitalizing on Apple’s struggles with Group FaceTime to attract attention to its own group calling features. Today, the company announced it’s doubling the number of people who can simultaneously participate in a group audio or video call. It now supports as many as 50 people at once, up from 25, previously.

With the expanded support for more participants, Skype tops the abilities of other popular messaging apps like WhatsApp, Google Hangouts and Instagram, and instead competes more directly with enterprise-grade calling solutions like Zoom, for example, which supports up to 100 or even 1,000 participants, depending on the plan, with up to 49 webcams displayed in its gallery view.

Skype isn’t as robust, but offers something in between an enterprise platform and consumer apps.

Skype also one-ups Facebook Messenger, which allows 50 people to join a chat but limits the screen to show only the speaker after more than a half-dozen people join in. On Skype, participants are shown in bubbles across the top of the screen and the end-user can choose whose feed they want to focus on in a multi-paned main window.

Notably, Skype’s update also puts it ahead of Apple’s FaceTime, which now supports up to 32 people on group calls as of iOS 12.1.

But Group FaceTime has experienced some issues in recent months. A teenager found a security bug that allowed users to eavesdrop before calls were picked up. Apple disabled the feature, fixed the bug, then re-enabled Group FaceTime with February’s release of iOS 12.1.4. But the update also introduced a change to how the app works, as it required users have to have at least three people on a FaceTime call to begin with before they could use the “Add Person” button.

Skype, on the other hand, is simplifying how video calls start with the new release. 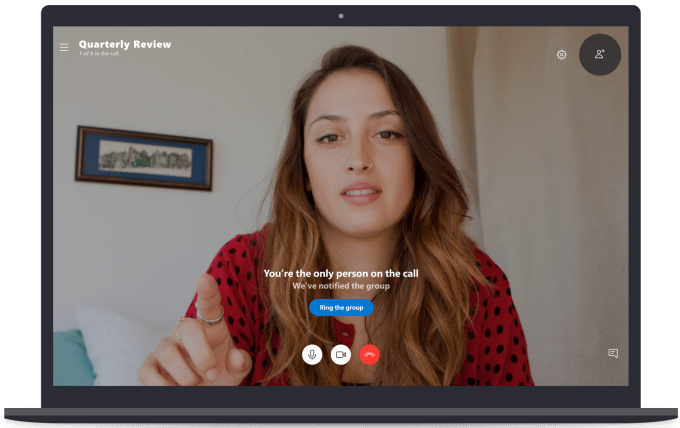 For groups with less than 25 participants, you can just ring the entire group at once, the company says.

And for larger calls, Skype added a notification option to replace ringing as the default. That means participants get a less obstructive, ping-style alert to join the call.

These features were previously in testing back in March, but today they’re rolling out to the public across platforms.

To use these new features, you’ll need to download the latest version of Skype.