Snap is unlocking a new revenue stream while giving you something to do between chats and Stories. Today Snapchat debuts its Snap Games platform that lets you play real-time, multiplayer games while texting and talking with your friends. The platform is based on Snap’s secret late-2017 acquisition of PrettyGreat, an Australian game studio with talent from HalfBrick (which built Fruit Ninja). That team built Bitmoji Party, a Mario Party-style mini-game fest, to show off the platform that includes five games from developers like Zynga and ZeptoLab. The games are rolling out worldwide on iOS and Android starting today.

To monetize the platform, Snapchat will let users opt in to watching six-second unskippable commercials that reward them with a power up or bonus in-game currency. Snapchat will share revenue from the ads with developers, though it refused to specify the split. It could be a little weird watching ads to more easily beat your friends. But down the line it’s easy to imagine Snapchat selling cosmetic upgrades via in-app purchases akin to Fortnite. 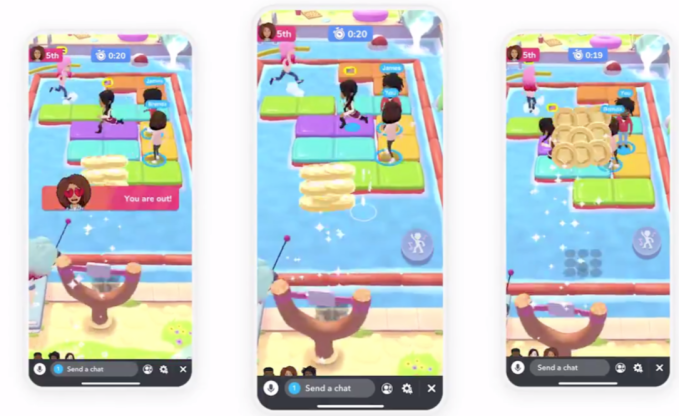 Snap announced the new Snap Games platform at its first-ever press event, the Snap Partner Summit in Los Angeles, where it also announced an augmented reality utility platform called Scan, an ads network and a way to put its Stories in other apps. “We wanted to build something that makes us feel like we’re playing a board game with a family of over a long holiday weekend. Something that makes us feel like we’re sitting with friends, controllers in hand, looking at the same screen,” says Snap’s head of gaming, Will Wu. The Information’s Tom Dotan and Amir Efrati first reported Snap was building a gaming platform and Cheddar’s Alex Heath reported it would end up launching today.

Snap Games could be considered a real-time spin on Facebook Messenger’s Instant Games platform, which has focused on porting to HTML5 well-known asynchronous games like Pac-Man and other arcade titles. Similarly, Snap Games don’t have to be downloaded separately, as they’re piped in from the web. Users can browse available games by tapping a new rocket ship button in the chat bar.

With Bitmoji Party, your avatar competes with up to seven friends simultaneously in a series of mini games where you have to stay balanced on a giant record as a DJ scratches it, or avoid getting knocked in the pool. You also can have another 24 friends spectate and rotate in. Winners earn coins they can use to buy dances to stunt on their competition. And with an ever-present chat bar, users can use text or voice to talk trash.

Rather than port in known IP, Snap recruited developers to build games exclusively for its vertical, real-time multiplayer format. These include: 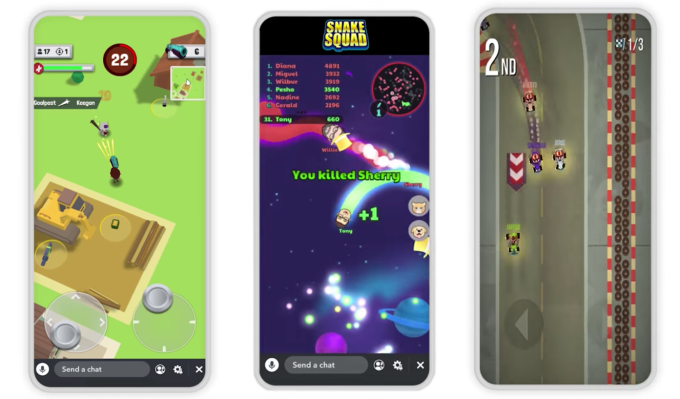 Snap’s game platform has huge potential to boost time spent in the app and the ads views that generates because gaming is perfect for its demographic. “In the United States, Snapchat now reaches nearly 75 percent of all 13 to 34-year-olds, and we reach 90 percent of 13 to 24-year-olds. In fact, we reach more 13 to 24-year-olds than Facebook or Instagram in the United States, the U.K., France, Canada and Australia,” Snap CEO Evan Spiegel revealed today. This is the age group with the free time and dense social graphs to make use of multiplayer real-time games.

The big question is whether Snap’s reward-incentivized video ad views will generate enough cash to keep developers coming to the platform. If not, a limited line of titles could get old quick. Snap has entirely avoided in-app purchases since shutting down its Lens Store in early 2016. There’s understandable concern that kids could rack up huge bills on their parents’ credit cards. But given how Fortnite has normalized paying for no-utility cosmetic upgrades for this same demographic, with the right controls Snapchat could do the same to make itself and its partners a lot more money. And given you’re always playing with your friends, not strangers, there’s an even deeper urge to buy funny costumes and dances to impress them.

Snapchat’s overarching strategy right now is to build an orbit of time-wasters surrounding chat. What began with Stories now includes Discover publications, premium Shows, augmented reality toys and now games. It may never become a favorite with the 35+ age group. But since messaging is the top mobile behavior, Snap can use it to keep people coming back and then distract them while they’re waiting for a reply or need a social alternative to small talk.

Snapchat will power Stories & ads in other apps