Ruhnn, a company that enables influencers to sell through e-commerce and is plotting to change the face of China’s fashion industry, has raised $125 million after it listed on the Nasdaq on Wednesday.

The company sold 10 million American Depositary Shares at $12.5 a pop, the midpoint of its expected range. In an earlier filing with the U.S. Securities and Exchange Commission, the Alibaba-backed firm targeted to raise $200 million from its initial public offering.

While big brands in the U.S. are turning to influencers for marketing actions, a similar trend has been brewing in China. Key opinion leaders, or KOLs as they are locally called, build up millions of followers across social media on account of their expertise in specific fields, ranging from video games to Korean fashion. Recognizing their commercial possibility, savvy talent managers jostle to sign these stars to generate e-commerce success.

But influencer marketing in the two countries has taken on different shapes. “In the U.S., influencers have stemmed from content marketers. They like to make videos, take photos and rarely think about selling things because they are sufficiently compensated by Youtube and the likes,” Ruiwan Xu, founder of YC-backed online academy CareerTu targeting digital marketers, told TechCrunch. “In China, however, content creators get less monetary reward from content platforms, so they have to find other ways to monetize.”

Frost & Sullivan’s data shows sales generated by China’s KOLs reached 32.9 billion yuan ($4.9 billion) in 2017 and are expected to produce a healthy 40.4 percent compounded annual growth rate (CAGR) over the next five years. Though in its nascent state, the KOL economy has charmed China’s younger generations. Ruhnn says more than 80 percent of the fans following its KOLs are millennials, or, people born between the 1980s to early 2000s. 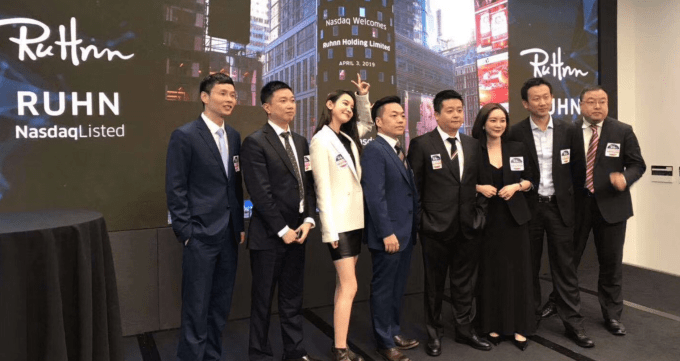 Ruhnn, which was founded in 2016 by Feng Min, a former online shop owner, is one of the early movers to capitalize on China’s up-and-coming internet stars. The Alibaba-backed company supplies a suite of services for KOLs to connect with fans on one hand and brands and retailers on the other. That means influencers receive training to grow their fame and create digital content to market products. In 2018, Ruhnn’s batch of 113 contracted KOLs generated 2 billion yuan ($300 million) in total sales and collected nearly 150 million fans across various social channels.

The firm, which is based in Alibaba’s backyard Hangzhou in eastern China, is more than a talent agency in the traditional sense. The startup operates online stores for online stars and takes care of the full e-commerce cycle, from product design, manufacturing, warehousing, delivery (which it enables through third-party logistics firms) all the way to after-sales services.

The majority of Ruhnn’s revenues come from direct sales of fashion and lifestyle goods, but the company carved out a less asset-heavy platform model in 2017. The approach essentially lets third-party stores and merchants buy advertising services from Ruhnn’s rank of KOLs. Ruhnn has grown this segment from less than 1 percent of its total revenues in 2017 to 11.7 percent in the nine months ended December 2018.

Companies like Ruhnn, which are sometimes called KOL “facilitators” or “incubators,” not only empower internet celebrities; they are also crucial to social platforms hungry for content. Ruhnn’s stars are all over the Chinese internet, engaging users on WeChat, Weibo and Douyin, which is TikTok’s local version.

Zhang Dayi and her fans / Photo: Zhang Dayi via Weibo

Ruhnn and other e-commerce sites that rely on KOLs to sell, such as NYSE-listed, Hangzhou-based Mogu, are also tipped to shake up China’s fashion supply chain. Traditionally, brands get consumer reaction only after they put things on sale. KOL facilitators flip that process by asking influencers to try on brands’ sample garments. From there the stars will ask fans for feedback, based on which brands can adjust their design and factory orders. Ruhnn has also barcoded its inventory, so KOLs and retailers know exactly how consumer tastes are shifting in real time.

Despite being the largest KOL facilitator by revenue according to data from Frost & Sullivan, Ruhnn faces a few hurdles. A report (in Chinese) done by Tencent shows people born after the 2000s are growing tired of being sold to by KOLs. In addition, China could tighten its tax laws around the nascent KOL industry that can have revenue implications for companies like Ruhnn.

The most pressing issue is perhaps Ruhnn’s overreliance on a small handful of top KOLs. One particular influencer, Zhang Dayi, accounted for about half of its total sales for nearly three years. That means Ruhnn is under tremendous pressure to retain Zhang, who currently serves as the firm’s marketing chief, be it through financial incentives or marketing support for the celebrity.

The problem is not unique to Ruhnn, as creators are key to all of China’s content-heavy platforms, including esports streaming site Huya and short-video app Douyin. These companies have spent generously to recruit KOLs and deployed big data to track user sentiments, but we all know that a celebrity’s success is at times a matter of luck.

Mogu’s long journey: From rejecting Alibaba’s advances to US IPO