The company’s software as a service platform targets brands wanting to protect products and their reseller network from cheap online fakes and/or piracy, with both physical branded goods and copyrighted digital content covered by Red Points’ brand protection tech.

“The whole process is automated from detection to enforcement,” CEO Laura Urquizu tells us. “To the companies that we help we usually say that we are like an antivirus. Because we are there the counterfeiters move to other brands, other companies, other places. So in order to keep it clean it’s very important to counter with an act — or with a technology like ours — in order to have, let’s say, the Internet and the marketplaces and the social networks as clean as possible.”

Commenting in a supporting statement, Steffan Peyer, principal at Summit Partners, added: “Brands around the world are facing an unprecedented rise in online IP infringement. Red Points is a category-leader, offering an intelligent and robust technology platform that is purpose-built to address this growing pain point. With differentiated technology and a strong leadership team, we believe that Red Points is well positioned to accelerate its growth and further solidify its leadership in the Brand Intelligence market.”

Detecting and acting on online sales of fake goods still makes up the lion’s share of Red Points’ business, accounting for around 70% vs 30% dealing with digital copyright infringements. “We started with digital content and then we really made a very interesting decision to put our efforts a lot in brand protection and fake products. This is where the platform that we developed is very strong,” says Urquizu.

She notes for example that the software helps brands track sellers to highlight adjacent issues related to illegal sales, such as underpricing in specific geographies.

Analytics around IP threats is another core element of the SaaS proposition. “Another very important functionality is all the data that we are able to bring to our clients. Their own data and data that we produce related to the vertical, related to other clients etc.

“Customers use this IP ‘threat intelligence’ for various use-case — such as to see where most of the counterfeiting is happening and on which platforms fakes are being distributed. That way they can also implement their own strategies related to those specific platforms or to those specific countries. They also understand who are the top sellers infringing — so they can also take legal action against them.”

“Counterfeiting is everywhere, everywhere,” adds Urquizu, discussing the scale of the online fakes problem for brands. “All platforms, all social networks are affected. And of course when something is trendy it is affected. We see it in the brands that are offering new gadgets that are very trendy. Immediately they get the problem of counterfeiting and with platforms and social networks the more trendy the better it’s a place for counterfeiting to use it as a playground.” 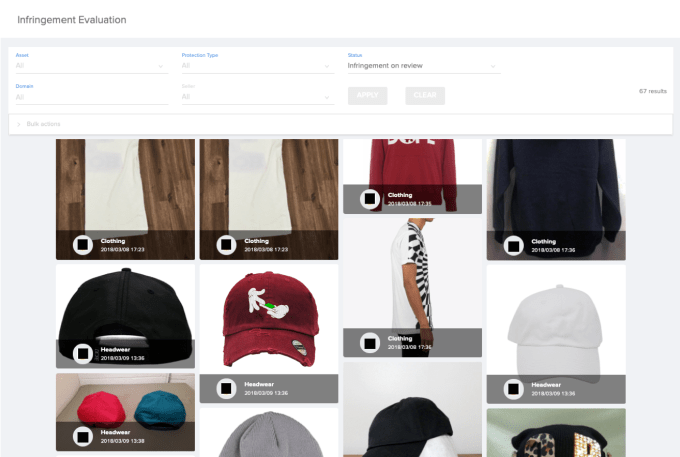 Red Points is now detecting more than 500,000 incidents of illegal products and/or content per month for 550+ customers. That’s up from 300+ customers when we spoke to Red Points last year.

Customers include makers of branded goods in verticals such as fashion, design, toys and accessories, as well as media companies on the digital IP side. It names the likes of Bang & Olufsen, MVMT and DOPE among its client base.

Newer growth verticals for the business include electronics and industrial machines. “We are growing at an average pass of 40 new clients monthly at this moment,” adds Urquizu.

On the enforcement front, she says the platform takes “hundreds of thousands” of enforcement actions on behalf of its paying customers each month. (A year ago it was reporting 200k+ removals per month so it appears to no longer be breaking that metric out.)

Overall, business growth rate exceeded 100% for 2018, with the U.S. making up a large chunk of the bump following the opening of a New York office just over a year ago. Urquizu says the market now accounts for around half its business.

A big focus for the Series C funding is ramping up sales and marketing in the U.S. “A lot of our growth comes from U.S. and we just started so what we want to do is we want to increase our presence and our footprint.”

Even so, Urquizu says the company has no plans to move its HQ out of Europe. “The U.S. office is gonna grow. It is growing… We started only last year and it was March/April. Now we are more than 20 people in U.S. already. And we’re going to continue growing this year there… But we think that for us the technological and product teams they can be sitting here in Barcelona very well because talent is really good here. And we find that from here we can really serve very well to the rest of the world.”

“Every month we are really growing very, very nicely,” she adds. “Now we have way over $10M of revenues so I would like to continue doubling these revenues yearly.”

The new funding will go on more R&D, too. Or “progressing on everything we do, finding new issues that we can solve, bringing a lot of more data and insights to the clients”, as Urquizu puts it.

On the competitive front, she reluctantly names veteran U.S. firm MarkMonitor, saying it provides some of the same services — while arguing there are big differences of approach.

“The technology we are providing to our clients, to the market, and to companies it’s very new, very innovative and very different to anything that is out there,” she claims. “The one very different thing is we have been able to automate the process from detection to enforcement using machine learning and artificial intelligence.”

Asked about a controversial digital copyright reform proposal — which was approved by the European parliament last week and shifts liability for copyright infringements committed by their users onto major platforms, Urquizu is untroubled.

She sees rising awareness of problems of piracy and counterfeiting as good news for a business that makes its money from companies paying it to get fakes taken down.

“What we think is that this kind of new legislation usually takes a large time until it has an impact so the real impact we will see in a couple of years, more or less,” she suggests, before adding: “We always see these kind of things as an opportunity for us. Because currently there’s so much that can be done against this issue — and also whatever helps us to bring awareness to brands and companies, we always think it’s very, very positive.

“These kind of things really support what we do because it makes the companies and the brands aware that something has to be done. So we always also have a very big collaboration with platforms, with the social networks, so for us we always see it as an opportunity to grow altogether.”