The scales are about to tip in favor of streaming music becoming the number one driver of global recorded music revenues — a shift that appears to be on track for sometime this year. According to a new industry report, global recorded music revenues jumped 9.7 percent in 2018 to reach $19.1 billion — up from $17.4 billion in 2017. Streaming music revenues, in particular, now account for nearly half (47 percent) of global revenue, thanks to a sizable 32.9 percent jump in paid streaming last year. This brought streaming revenues to $8.9 million in 2018, and puts them on track for a further jump in 2019.

This is the fourth consecutive year of growth for the global music market, and the highest rate of growth since IFPI — the music industry trade group behind the new report — first started tracking the market in 1997.

At year-end, there were 255 million users of paid subscription streaming accounts, the report found.

Meanwhile, physical disks dropped 10.1 percent over the past year, to account for 24.7 percent of revenues. Within that segment, vinyl is still growing — it posted its 13th consecutive year of growth, to reach a 3.6 share of the market. But it couldn’t make up for the fact that physical format revenue, overall, still declined. 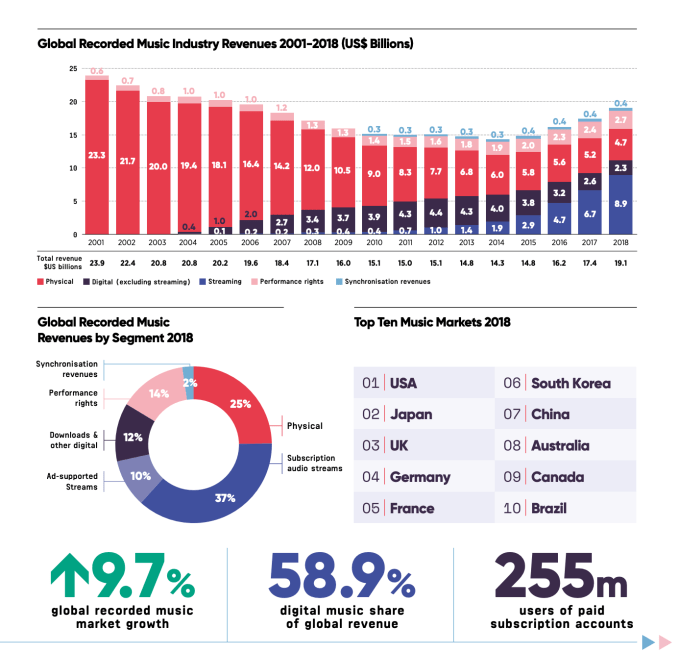 As consumers drop physical disks, they continue to turn to digital.

Digital revenues grew by 21.1 percent in 2018 to reach $11.2 billion — which represents the first time they’ve crossed the $10 billion mark, the report noted. Within this category, streaming grew by 34 percent to reach $8.9 billion (~$7 billion was paid subscription streaming), while downloads declined 21.2 percent to 7.7 percent of the market.

In 38 markets, digital makes up more than half of revenues, the report said.

Revenues from performance rights and synchronization revenue (the use of music in TV, movies, games and ads), represented a 14 percent and 2.3 percent share of the total music market, respectively.

Asia and Australia overtook Europe to become the second largest global region for revenues with 11.7 percent growth. And Latin America was the fastest growing region, with 16.8 percent growth.

In order, the top markets by revenue were: the U.S., Japan, the U.K., Germany, France, South Korea, China, Australia, Canada and Brazil.