FireHydrant, an NYC startup, wants to help companies recover from IT disasters more quickly, and understand why they happened — with the goal of preventing similar future scenarios from happening again. Today, the fledgling startup announced a $1.5 million seed investment from Work-Bench, a New York City venture capital firm that invests in early-stage enterprise startups.

In addition to the funding, the company announced it was opening registration for its FireHydrant incident management platform. The product has been designed with Google’s Site Reliability Engineering (SRE) methodology in mind, but company co-founder and CEO Bobby Ross says the tool is designed to help anyone understand the cause of a disaster, regardless of what happened, and whether they practice SRE or not.

“I had been involved in several fire fighting scenarios — from production databases being dropped to Kubernetes upgrades gone wrong — and every incident had a common theme: ​absolute chaos​,” Ross wrote in a blog post announcing the new product.

The product has two main purposes, according to Ross. It helps you figure out what’s happening as you attempt to recover from an ongoing disaster scenario, and once you’ve put out the fire, it lets you do a post-mortem to figure out exactly what happened with the hope of making sure that particular disaster doesn’t happen again.

As Ross describes it, a tool like PagerDuty can alert you that there’s a problem, but FireHydrant lets you figure out what specifically is going wrong and how to solve it. He says that the tool works by analyzing change logs, as a change is often the primary culprit of IT incidents. When you have an incident, FireHydrant will surface that suspected change, so you can check it first.

“We’ll say, hey, you had something change recently in this vicinity where you have an alert going off. There is a high likelihood that this change was actually causing your incident. And we actually bubble that up and mark it as a suspect,” Ross explained. 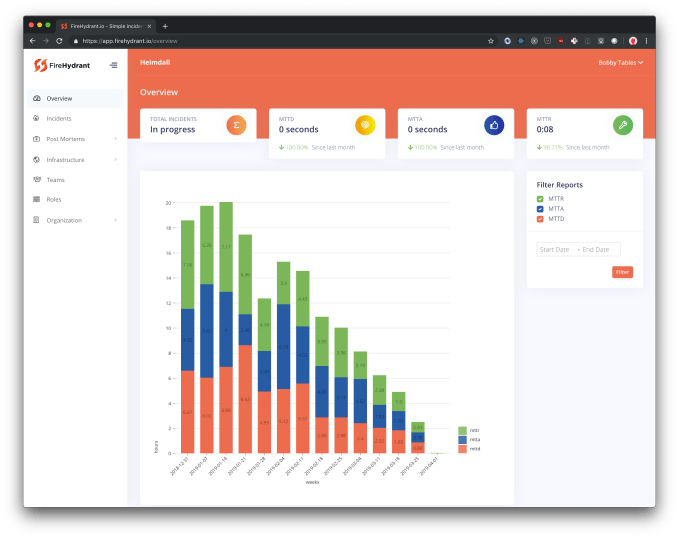 Like so many startups, the company developed from a pain point the founders were feeling. The three founders were responsible for solving major outages at companies like Namely, DigitalOcean, CoreOS and Paperless Post.

But the actual idea for the company came about almost accidentally. In 2017, Ross was working on a series of videos and needed a way to explain what he was teaching. “I began writing every line of code with live commentary, and soon FireHydrant started to take the shape of what I envisioned as an SRE while at Namely, and I started to want it more than the video series. 40 hours of screencasts recorded later, I decided to stop recording and focus on the product…,” Ross wrote in the blog post.

Today it integrates with PagerDuty, GitHub and Slack, but the company is just getting started with the three founders, all engineers, working on the product and a handful of beta customers. It is planning to hire more engineers to keep building out the product. It’s early days, but if this tool works as described, it could go a long way toward solving the fire-fighting issues that every company faces at some point.