Amazon-owned Whole Foods announced a third round of price cuts that will see the grocer discounting hundreds of items, offering an average savings of 20 percent. Produce is an area of specific focus in this wave of price cuts, with lowered prices on seasonal items including greens, tomatoes, tropical fruits and more. In addition, Amazon will expand its Prime benefits offered to Whole Foods shoppers with a larger selection of weekly deals, the company says.

Lowering prices at Whole Foods was one of the first major changes Amazon introduced following its $13.7 billion acquisition of the grocery chain in 2017. Almost immediately, discounts were put into place, ranging from 6 percent on the low-end to as much as nearly 30 percent, in some cases. Last year, Amazon also introduced 10 percent savings for Prime members shopping at Whole Foods across the U.S. — including for its delivery services, where available.

Through previous rounds of price cuts and Prime member deals, Whole Foods says customers have saved “hundreds of millions” of dollars since the chain’s merger with Amazon.

Today, the retailer says it will again lower prices storewide, with a focus on produce. Some of the new savings include large yellow mangoes for $1 each; mixed-medley cherry tomatoes for $3.49 per 12 oz. and organic bunched rainbow chard at $1.99 each. The WSJ reports more than 500 products have seen price cuts, and are the broadest cuts to date.

In addition, Whole Foods will double the number of exclusive weekly Prime Member deals and discounts. 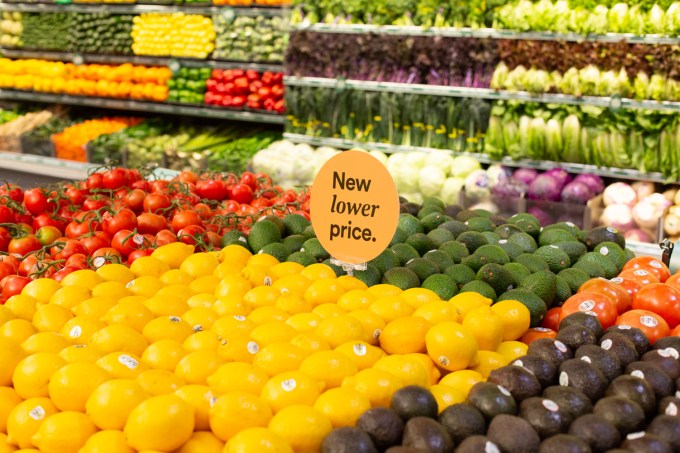 Over the next few months, Prime members shopping the store will be able to take advantage of more than 300 Prime member deals on the season’s most popular items, the company notes. This includes, in April, discounts on things like organic asparagus and strawberries, antibiotics-free chicken, sliced ham, wild-caught halibut, Justin’s brand products, prepared sandwiches and wraps and more. Every week, up to 20 deals are available to Prime members.

In some cases, these new discounts for Prime shoppers as high as 35 to 40 percent.

Prime members also save the usual 10 percent on hundreds of other sale items.

“When Whole Foods Market joined the Amazon family, we set out to make healthy and organic food more accessible. Over the last year, we’ve been working together tirelessly to pass on savings to customers,” said Jeff Wilke, CEO of Amazon Worldwide Consumer, in a statement about the new cuts. “Every time a customer walks into a Whole Foods Market, they expect and trust industry-leading quality standards across aisles. And now they will experience that same Whole Foods Market quality with even more savings across departments.”

To kick off the new price cuts and encourage foot traffic in-store, customers who try Prime will get $10 off their $20 purchase for signing up for a membership. Membership includes Whole Foods’ weekly deals, free grocery pickup, free grocery delivery on orders over $35, Alexa shopping and all the other Prime perks on Amazon.com.

The move to cut prices comes at a time when Walmart and Amazon are battling for grocery customers, with the former leveraging its existing brick-and-mortar footprint for free pickups, as well as its reputation as a low price leader. Unlike grocery delivery services such as Instacart or Target’s Shipt, Walmart’s groceries cost the same to pickup or deliver as they are in-store. (Target is now offering the same deal on Shipt, but only for Target items — not those delivered by other stores, which are still marked up.)

To cater to grocery shoppers, Amazon is leaning more on its Prime membership program to entice customers used to the convenience of near-instant gratification and fast delivery. Whole Foods Market groceries ordered through Prime Now can arrive in two hours in more than 60 metros, with more cities on the way. And grocery pickup is offered in 30 minutes at some Whole Foods locations.