The tech world sure does love a good prank.

While some sat out on April Fools’, a number of big tech companies embraced the opportunity to waste time this way.

So without any further ado, here are the April Fools’ pranks from around the web:

Google Tulip, in my humble opinion, is the best April Fools’ joke this year. It’s a product that lets you communicate with tulips (they’re making progress with cacti, which just want to be left alone, it would appear).

The premise itself is par for the course on April Fools’ Day — the perfect mix of mildly plausible and “but why?” — but a few of the comedic touches on the video really make this prank shine.

If the bit at the :54 mark doesn’t tickle you, then I fully respect your opinion, but we are very different people and I doubt we could ever be real friends.

This happens to be one of my favorite April Fools’ jokes from a tech company this year. Shutterstock is unveiling “plans” to build the world’s largest physical library, called stock IRL, which would host “shelves upon shelves upon shelves” of stock photos, watermarked videos and music tracks.

Sometimes, the idea itself can be an obvious prank as long as it’s executed well. It doesn’t hurt that Shutterstock does a pretty solid job marketing its actual product here, either.

This one is elegant and delightful. Spotify has transformed your Discover Weekly playlist to feature disco hits, or disco takes on non-disco hits. I’ve been listening to mine this morning and it’s solid. Oh, and the playlist is called Discocover Weekly.

The best way to learn a language is to practice every day. So Duolingo is introducing a more effective way to remind you with Duolingo Push.

“We’re taking push notifications out of your phone and into the real world! Duo the Owl will literally show up to remind you to practice. It’s the green-glove treatment you’ve always wanted.” 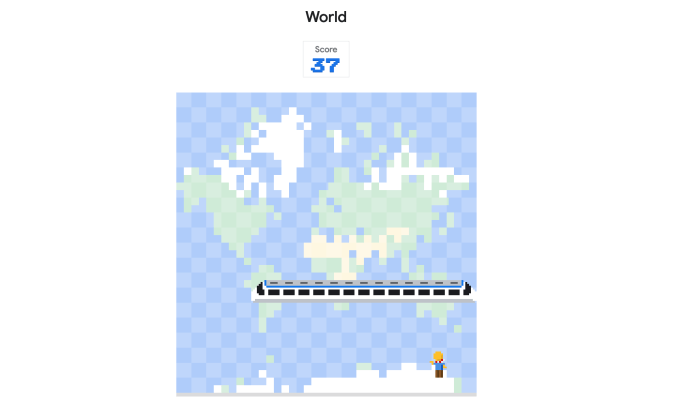 If this is a prank, it’s an incredibly generous and sweet prank that never hurt anyone. Google has put the classic Snakes game into the Google Maps app, for both iOS and Android, as well as on a standalone site for folks who don’t have the app.

It’s fun and simple and makes me wonder why this nostalgic little Easter Egg can’t live in the Google Maps app forever and for always.

(I died for that ^^ screenshot. You’re welcome.) 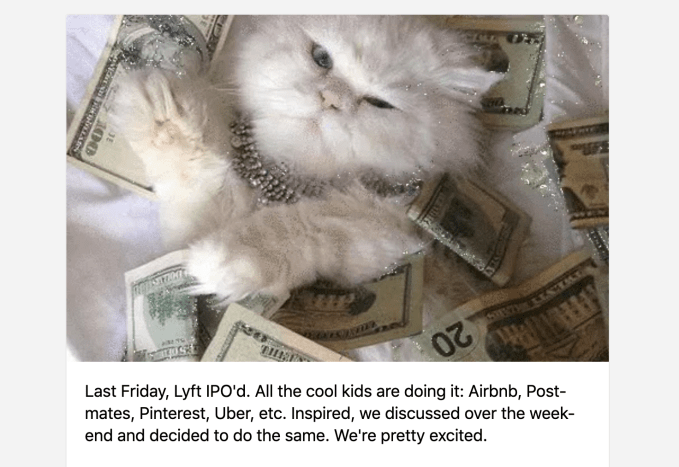 ProductHunt joked that it’s going public simply as a result of peer pressure. It also highlighted some of the April Fools’ pranks coming through on its own platform, including a SideDoor into college admission and a monstrous USB hub.

It’s exactly what you think it is. Waymo Pet is an autonomous car service exclusively for pets. The real beauty in this April Fools’ joke is in the details — the idea of Waymo employees overthinking the interior of a car based on the type of pet that may be riding in it is relatively humorous.

The not so good

Adobe wonders what would happen if designers could spark a memory through the smell of a particular ad or logo. Heralding the arrival of this hellscape is Adobe Capture, which uses Adobe Scent-sei technology to give users the ability to capture scents in the real world (through the camera?) and preview scents via the phone’s charging port.

Don’t shoot the messenger. It gets both better and worse from here. 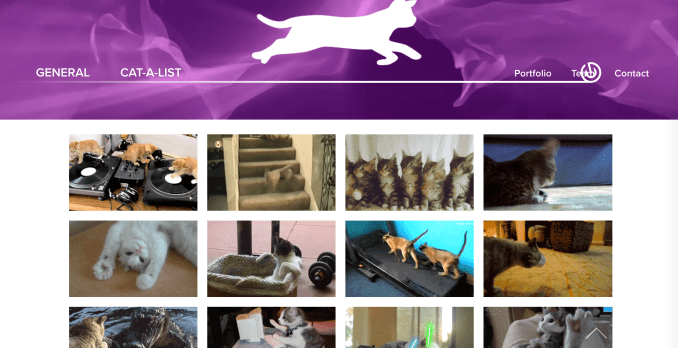 “We took this process seriously. To best convey that we sit at the cutting edge of all things new, bright and shiny, we spitballed our way through design-thinking sessions and administered Rorschach tests across the firm. We concluded that our brand should land at the intersection of tech + fun. What could illustrate tech-enabled fun better than the cat gif?”

Google is adding a new Screen Cleaner feature to the Files app. To clean it from the inside out. According to the video, the features uses “a smudge detector API” to identify imperfections, along with “geometric dirt models” and a “haptic micromovement generator” to sh-sh-shake it off.

And because they already committed, the team at Google decided to double down and say that the Screen Cleaner also uses micro vibrations to create a non-stick shield around your phone. Cause why not?

The NVIDIA GeForce R.O.N. AI personal assistant, as the name might suggest, is a classic case of too many pranky ideas coming to fruition at once.

The Echo-like device (but also with a holographic display, for some reason) offers in-game coaching (insults), a rage converter (which translates your screamed profanities into words of encouragement for your inept teammates) and the Troll Destroyer (using internet-sourced facts to take down trolls on forums). Those are just a few of the features of the R.O.N. AI personal assistant, which feels a bit too bonkers to be funny.

The landing page touts the book’s features, vacillating between pros and cons like “It’s Super Private” and “You can share your passwords.” Of course, analog password storage isn’t the worst way to store your passwords, especially if those passwords are strong in the first place and you’re keeping your Password Book in a safe place.

The OnePlus #WarpCar is coming. Are you ready to say goodbye to gasoline? #NeverSettle

For years, rumors swirled that Apple might be working on a car. For April Fools’, the smartphone newcomer OnePlus teased an upcoming electric vehicle called the OnePlus Warp.

Low-key, though, that comms system may very well be the exemplar for other games and even non-gaming platforms. Just not in the way Razr imagines here, obviously. 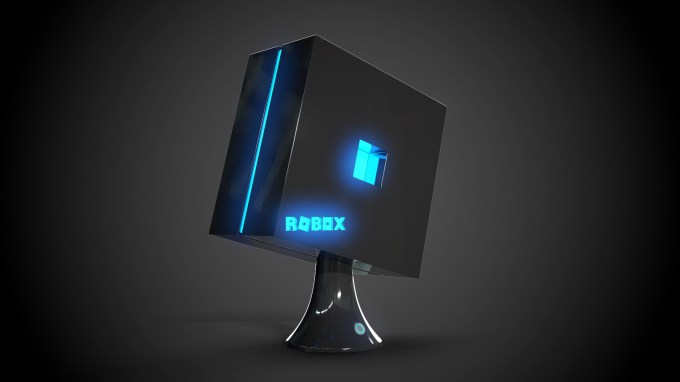 I’m not entirely sure what Roblox is doing here with the introduction of the first Roblox gaming console, offering “a new way to make your dreams a reality in stunning, 8K ultra-high definition graphics and at greater than 120 frames per second.”

“Deep underground in a secret laboratory, our engineers developed a groundbreaking processor that could distill imagination into a concentrated source of infinite energy,” reads the blog post. “That energy is what fuels the unbelievable technology in Robox.”

If it’s supposed to be funny, I don’t get it.

According to Roku, 72 percent of their users said they thought their dogs would enjoy TV more if they could control what’s on. Thus, the PressPaws Remote.

“This paws-specific remote could be a huge untapped market for us,” says Lloyd Klarke, director of product management for the Roku Pet Division. The remote has shortcut buttons shaped like paws, because the buttons are the only real barrier between a dog’s ability to master the TV remote.

And then there’s such a thing as trying too hard. SodaStream presents the SodaSteamME, which was built in partnership with astronaut Scott Kelly and allows folks to power their SodaStream with their own burps.

We may never know why.

StackOverflow also went for a simple prank, taking the entire website back to the early days of the internet, complete with Comic Sans typeface. It’s jarring. You can check it out here.

It’s funny because it’s true? On March 29, Tinder teased a new Height Verification Badge (HVB), which would force users to verify their age by taking a photo of themselves standing next to any commercial building. Remember, this is three full days before April 1.

The blog post has at least one typo, and some questionable language. (Exhibit A: “Did it ever occur to you that honesty is what separates humans from sinister monsters? Of course not.”) There is also, however, some hint of truth. (Exhibit B: “Only 14.5% of the U.S. male population is actually 6’ and beyond. So, we’re expecting to see a huge decline in the 80% of males on Tinder who are claiming that they are well over 6 feet.”)

For a minute, we couldn’t decide if it was real or not. But Tinder has confirmed that this is an April Fools’ prank.

If you’re still here, we’re done. T-Mobile’s sacrificial lamb in this blood bath of a “holiday” is the T-Mobile Phone BoothE, which is a soundproof phone booth.

Of note: T-Mobile CEO John Legere was an active participant in this prank, which raises concerns, but then again, that’s sort of his style.