In November, Facebook announced its plans to create an external content oversight board that would serve as something of a “supreme court” for Facebook’s more controversial content policy decisions. With the release of a draft charter in January, the company took the first steps to describe how this content review board would function. Today, Facebook is opening a public consultation process to help it answer more questions around the oversight board’s design.

Over the next six weeks, Facebook says it will accept submissions from the public about its plans.

Public submissions will include two parts: a questionnaire and free-form questions.

The latter will focus on gathering input around membership, case decisions and governance. The questionnaire portion, however, is a more straightforward user survey where participants are asked to vote on various aspects (many already detailed in the draft charter) — like how many total members should the board have, how long they should serve, how should they gain their positions and what their makeup should be in terms of background, professional experience, views and diversity, among other things. 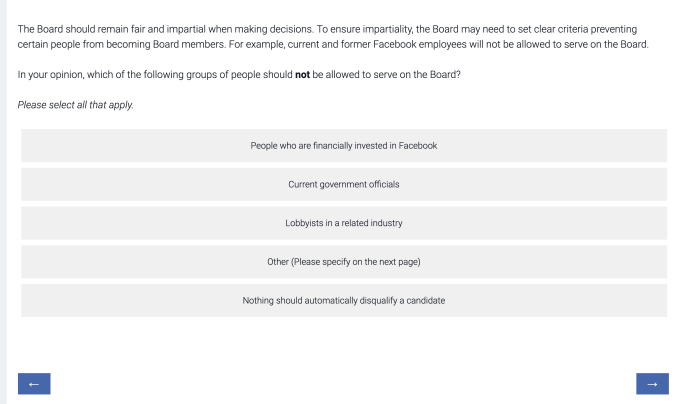 It also asks the public to weigh in on how the oversight board will make decisions on cases, with questions about how their rulings will impact policy, what subject matter experts they can consult, whether they should review written opinions from those the case affects, the precedent set by prior rulings and more. 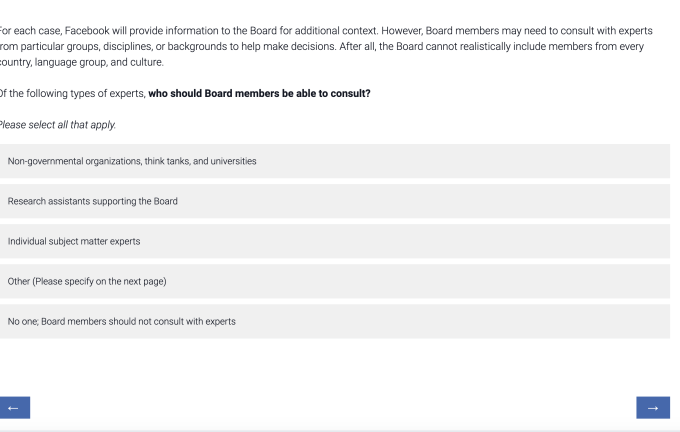 Some of these questions are simpler to answer, while others may give survey respondents pause.

For example, one asks if it’s more important for the board to dedicate more time and research to each case or if it should prioritize making more decisions each year?

While obviously all cases reviewed should be well-researched, if you believe Facebook’s board should resemble the U.S. courts system, then there should be guidance around how long its board members have to make a decision. Otherwise, it could see some of the toughest content policy decisions tied up in never-ending deliberations, with the board citing “more research is needed” to rule. That wouldn’t be fair to those whose content is held hostage in the meantime. But the question doesn’t allow for this level of nuance — so you’d need to take to the essay portion to share this position.

However, anyone can take the survey portion of the questionnaire and can choose to skip the essay section if they don’t have more to add.

Facebook says it has partnered with the firm Baker McKenzie, which will help it review the submissions. The responses will be summarized in a report published in June. 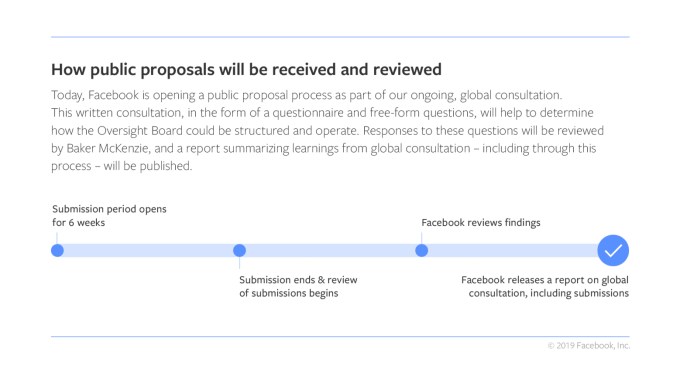 For Facebook, the launch of an independent review board allows the company to further distance itself from controversial policy decisions.

As we noted in January, decision-making around content removals is an area where Facebook has repeatedly and publicly failed, and with disastrous consequences. The company has been widely criticized for how it handled issues like the calls to violence that led to genocide in Myanmar and riots in Sri Lanka; election meddling from state-backed actors from Russia, Iran and elsewhere; its failure to remove child abuse posts in India; the weaponization of Facebook by the government in the Philippines to silence its critics; Facebook’s approach to handling Holocaust denials or conspiracy theorists like Alex Jones; and more.

The board’s creation will not only take the pressure off Facebook to make these decisions, it’s also an admission of sorts that Facebook agrees it’s no longer able to handle this level of responsibility.

Those interested in sharing their own thoughts around the review board can go here for the survey.