Viacom’s Nickelodeon is doubling down on the educational aspects of its preschooler-focused streaming service, Noggin, with the acquisition of the early childhood learning platform Sparkler. Announced on Friday, the deal will see Sparkler’s technology integrated into Noggin over the next year, and makes Sparkler’s co-founder and CEO Kristen Kane the new head of the Noggin streaming service.

Kane founded Sparkler after previously working as the founding COO of educational technology company Amplify. Prior to that, she served as COO of the New York City Department of Education during the Bloomberg administration, and spent time working at the FCC, where she led development of strategies for applying broadband technologies in the education, healthcare and energy sectors.

With Sparkler, the company had been developing a different type of early learning platform that measured a child’s progress in order to offer personalized content and coaching for parents, along with other tools that allowed parents, teachers or caregivers to help engage the child through learning activities both on and off-screen.

As a part of its efforts, Sparkler was working with schools, healthcare providers and social service providers. Those relationships will continue through a new nonprofit called Sparkler Learning.

Meanwhile, Sparkler’s core technology will be integrated into Noggin, offering a similar ability to personalize Noggin’s content and allow parents to track and support their child’s progress through “playable content and experiences,” both in the app and in the real world.

The acquisition represents a further expansion of Noggin’s educational aspects beyond its original focus on offering subscription-based streaming of kids’ TV.

First launched in 2015, the idea was to allow Viacom to capitalize on some of its less popular kids’ programming — like Allegra’s Window, Blue’s Room, Franklin and Friends, Gullah Gullah Island, Miss Spider’s Sunny Patch Friends, Oswald, Pocoyo, Robot and Monster and The Upside Down Show — by using a few of its more well-known series — like Blue’s Clues, Little Bear and Ni Hao, Kai-lan — as the draw.

Over the years since, Noggin expanded to include Nickelodeon’s current programming, like PAW Patrol, Peppa Pig, Bubble Guppies and others, and added classics like Dora the Explorer, Umizoomi and Yo Gabba Gabba! The expansion made it a more well-rounded service. 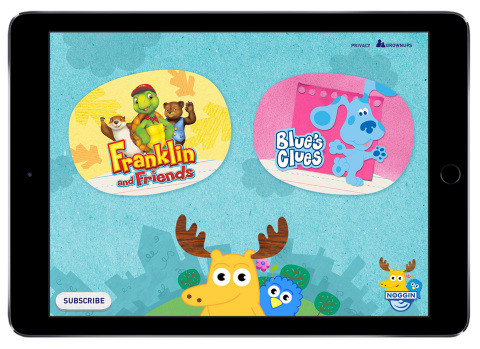 A couple of years ago, Noggin took its first steps into offering more educational content with the addition of curriculum-based “play along” videos. These new, interactive videos asked kids to touch, tap, swipe or speak to move through the storylines.

The concept was based on the work originated by the Children’s Television Workshop, which found that when kids participated by singing or talking, they retained more of what they learned. That work had also previously led to Nickelodeon’s development of TV shows like Blue’s Clues and Dora the Explorer, among others, which further standardized the practice of interactive television by having the show’s characters speak directly to the viewing audience and ask the children questions.

Noggin’s focus on its educational aspects — instead of just competing as a “Netflix for kids” —  helped it succeed. The app now regularly ranks highly in the Kids and Family categories on the App Store, and is a Top 10 Kids app on the free charts. It’s also the No. 1 grossing app for Music and Video in the Family Category on Google Play. And Nickelodeon says Noggin subscriptions have grown by triple digits from 2017 to 2018.

As a result of the deal, Kane will serve in the new role of Noggin’s executive vice president, and will oversee the integration of Sparkler’s technology into the app. She will also drive Noggin’s strategy and next phase of development as an educational digital platform, Nickelodeon says.

Kane will be based in New York and report to Nickelodeon President Brian Robbins.

“Pairing Sparkler’s capabilities with our curriculum-driven content will fully transform Noggin into a premier interactive learning destination for preschoolers and their families,” said Robbins, in a statement. “Kristen brings extensive experience in the education and technology space, and she will help drive Noggin’s growth with an increased focus on delivering even greater value to our direct-to-consumer service,” he added.

Sparkler’s website has already shut down, but you can read its archives here.

The startup had previously received a small grant by winning the NewSchools Ignite Early Learning (PreK-2nd Grade) Challenge as part of its accelerator program.