Now you can search Facebook for how much Trump has spent on ads in the past year, which Pages’ ads reference immigration or what a Page’s previous names were. It’s all part of Facebook’s new Ad Library launching today that makes good on its promise to increase transparency after the social network’s ads were used to try to influence the 2016 U.S. presidential elections. 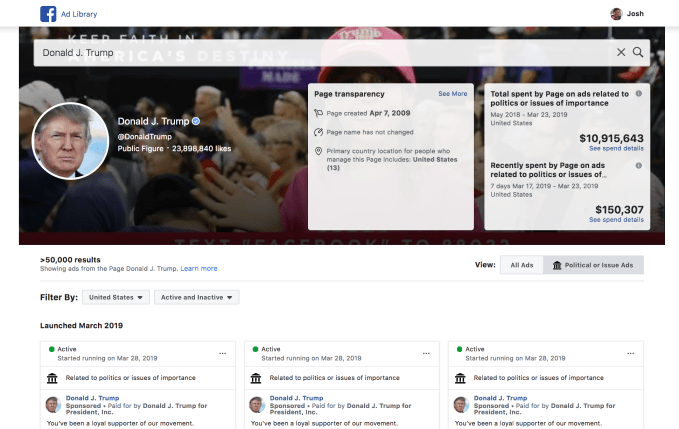 Facebook’s Ads Archive that launched in May 2018 previously only included ads related to politics or policy issues, but now shows all active ads about anything, as well as inactive political and issue ads. It displays Page creation dates, mergers with other Pages, Page name changes and where a Page is managed from, and the option to report an ad for policy violations — all of which will be visible on a new Page Transparency tab on all Pages. Users can search political and issue ads by keyword or other ads by Page name, and Facebook will lend a hand with auto-fill suggestions and previous searches. The Library also displays Pages’ total political ads in the past week or since May 2018. And in mid-May, Facebook will move to offering daily downloadable Ad Library reports as well as monthly and quarterly ones instead of just weekly ones as it currently does. 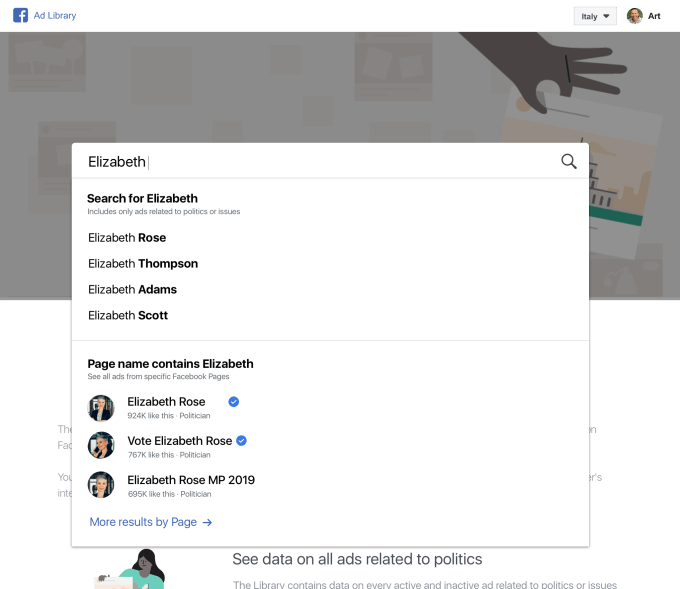 The improved transparency could allow researchers, government investigators, journalists or anyone play watchdog to ensure ads aren’t being misused to spread misinformation, suppress voting, exacerbate polarization or otherwise be sketchy.

Facebook stopped short of putting all expired and inactive non-political ads in the archive. It wouldn’t say why, but some advertisers have expressed concern that it could let competitors copy their messaging and targeting strategies. Another exemption will be news publishers, who teamed up to complain that sticking “Paid for by” labels on their ads promoting their political coverage made them look like they were campaigning for a certain side. Facebook exempted U.K. publishers in November, and now Facebook will use third-party lists of legitimate U.S. publishers to exempt their ads from the labels and Politics tab of the Ad Library as well.

Facebook is also bringing its political ad labeling to the whole European Union after launching in the U.K. in October. Political and issue ad buyers will have to submit documents and pass technical checks to verify their location and identity that will be reviewed by automated systems and audited by users who can report ads without proper labels. The goal is to prevent people from outside of a country from using ads to meddle in different nations’ elections. Facebook will also add a “Paid for by” label to all political and issue ads on Facebook and Instagram and place active and inactive ones in the Ad Library. The labels will review who bought the ad, their contact details, the budget for that ad, how many people saw it and the age, location and gender demographic details.

Facebook notes that it now has transparency tools revving up in Brazil, India, Ukraine and Israel as those nations prepare for elections. Facebook plans to have political and issue ad-transparency tools available globally by the end of June. 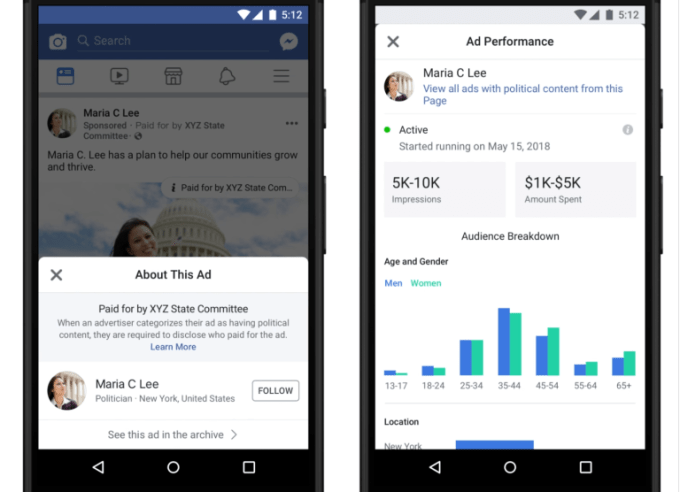 Meanwhile, Facebook is expanding researchers’ and developers’ programmatic access to Ad Library API, which was previously in closed beta. Now anyone with a Facebook developer account who goes through the Identity Confirmation process and agrees to the platform terms of service can use software to sift through and spot trends in the data. To prevent another Cambridge Analytica situation, Facebook tells TechCrunch it will impost rate limits on the API, but won’t disclose them to ensure bad actors can’t toe the line. When asked how else Facebook would safeguard the API given people don’t necessarily abide by the TOS, Satwik Shukla, product manager on the Business Integrity team at Facebook, told me, “this is why we have the Identity Verification process in place. We want to know the identity of someone accessing the data so if they do abuse our platform terms of service . . . we have the ability to revoke access.” 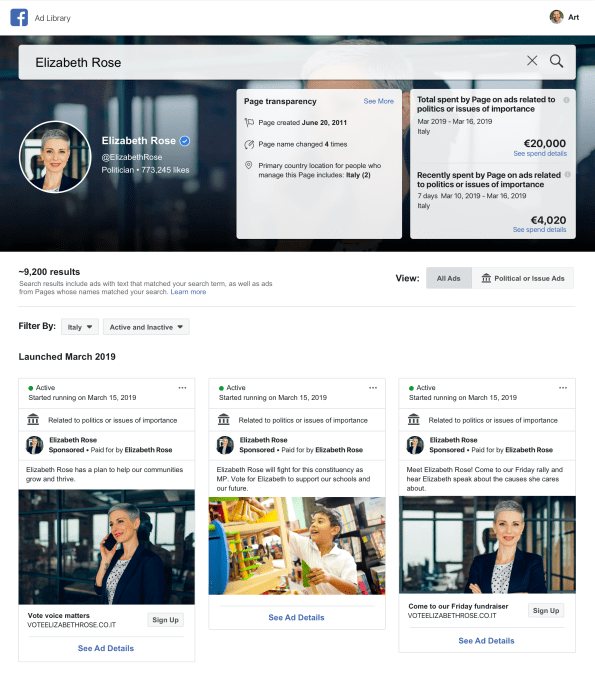 One fascinating move here is that the Ad Library and reports can be accessed even if you don’t have a Facebook account. That could ward off some critics and Congress members who’ve ragged on Facebook for requiring users sign up to access transparency information or stop it from collecting data on them.

Between the depth and convenience of access to Facebook ad data, watchdogs could spot problematic campaigns before influencing too much of the electorate. If someone spots a campaign trying to convince people they can vote by text message, that the Pope endorsed Trump or that are purposefully stoking anger to boost engagement, they could flag the ads to Facebook for removal.

As Facebook being charged with housing discrimination by the U.S. Department of Housing and Urban Development today proves, Facebook has repeatedly failed to stop problematic ads on its own. By opening itself up to assistance, it might not alleviate scrutiny, but at least all the eyes on it can help battle election interference and other abuse.