China’s Pinduoduo was all the rage in 2018 as the e-commerce upstart quickly rose to challenge Alibaba and raised $1.63 billion through a Nasdaq listing. Much of its success was attributable to its link to WeChat, China’s messaging leader. Now, another emerging e-commerce player that has leveraged WeChat is gearing up for a listing in the United States.

Yunji, which was founded in 2015 (the same year Pinduoduo launched), is raising up to $200 million according to its prospectus filed with the Securities and Exchange Commission last week. Reuters reported citing sources in September that Yunji planned to raise around $1 billion in the IPO at a valuation of between $7 billion and $10 billion.

Like Pinduoduo, Yunji bills itself as a “social e-commerce” service, which means it takes advantage of social relationships on apps like WeChat to acquire, engage and sell to users. The pair differ, however, in how exactly they make money. Pinduoduo generates the bulk of its revenues — nearly 90 percent in the fourth quarter — from advertising fees collected from merchants. This is akin to Alibaba’s marketplace play of connecting buyers and third-party sellers. Yunji, which was started by e-commerce veteran Xiao Shanglue, focuses on direct sales like Alibaba’s arch-foe JD.com, derived 88 percent of its fourth-quarter revenues from selling to users.

In terms of size, Yunji was about $15 million behind Pinduoduo in revenue last year. It had 23.2 million buyers in 2018, compared to Pinduoduo’s 272.6 million monthly active users. Yunji was, however, much closer to achieving profitability than Pinduoduo, which spent most of its money on sales and marketing. Most of Yunji’s expenses went to fulfillment and logistics. 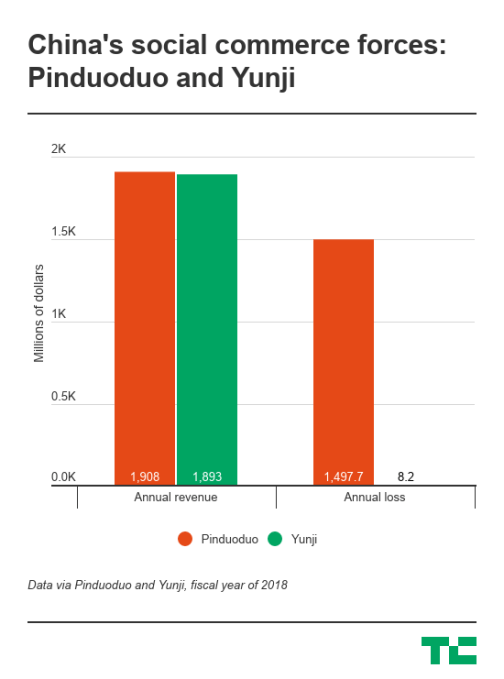 From inception, Yunji has boasted of its “innovative” membership-based e-commerce model. To join, people typically pay a fee, upon which they gain access to a variety of benefits and discounts as well as the permission to open their own micro-stores. Members then get compensated for successfully selling to others and recruiting new members.

The marketing practice helped Yunji quickly build up a large network of users. As of 2018, Yunji had 7.4 million members who contributed 11.9 percent of its annual revenues and 66.4 percent of annual transactions. But the firm went too far in exploiting the social links it controlled that it started to look like a pyramid scheme, which is banned in China. In 2017, the local government slapped Yunji with a $1.4 million fine for pyramid selling. The firm subsequently apologized and promised to revamp its marketing strategy. For instance, to avoid crossing the red line of awarding salespeople with “material” or “financial” benefits, Yunji resorted to virtual Yun-coins, which are not redeemable for cash and can only be used as coupons for future purchase.

But Yunji is still on the edge. The company warns in its prospectus that China could at any time redefine what constitutes pyramid selling.

“[T]here is no assurance that the competent governmental authorities in China that we communicate with will not change their views, or the other relevant government authorities will share the same view as our PRC legal counsel, or they will find our business model, not in violation of any applicable regulations, given the uncertainties in the interpretation and application of existing PRC laws, regulations and policies relating to our current business model, including, but not limited to, regulations regulating pyramid selling.”