Obvious Ventures was founded in 2014 by Medium CEO and Twitter co-founder Ev Williams, along with Vishal Vasishth and James Joaquin. Its mission? To invest in startups that make a positive impact on the world.

It’s a bold idea, and in its marketing material, San Francisco-based Obvious specifically states that it “invests only in companies where every dollar of revenue is also delivering some environmental or social impact.”

Despite that promotional language, the firm doesn’t want you to call it an impact investor. So to settle the confusion, we asked the firm directly to find out if we were getting caught up in semantics, or if this seemingly intentional differentiation stems from the fact that traditional impact investors have earned a reputation of being laissez-faire about returns.

We suspected the latter, and we were right — for the most part.

When the firm came together five years ago, the partners’ intention was “to invest in entrepreneurs we felt were purpose-driven and going after some of the world’s biggest challenges, or pieces of them at least,” said Andrew Beebe, managing director at Obvious. At the same time, the firm was looking for “top venture performance.” It is by this reasoning the venture firm, also a B-corp, prefers to describe its investment strategy as “World Positive.” It’s a nuance that’s easy to miss, even for founders looking for cash.

“When the fund first started, we did get a lot of people coming to us thinking of us as a social impact fund,” Beebe told Crunchbase News. “We would get pitches for yoga mat cleaners, or people selling a lot of used clothing and putting it into a business model that just reeked of first-world hubris,” he said. “But that’s not the kind of stuff we wanted to invest in.”

“We believe if you combine purpose-driven terrific entrepreneurs solving the world’s biggest problems, you should outperform your peers,” he told Crunchbase News. “We think those companies can adjust, grow and scale better as world-changers. Put simply, we believe purpose fuels profit.”

Obvious has closed on two funds since its inception: raising a deliberate $123,456,789 million in 2015 and $191,919,191 million in 2017. It currently has more than 50 companies in its portfolio, including Plant Prefab, a prefabricated home factory; Good Eggs, an online grocer and meal kit delivery service; and Diamond Foundry, which says it “cultures diamonds in California with a zero carbon footprint.” 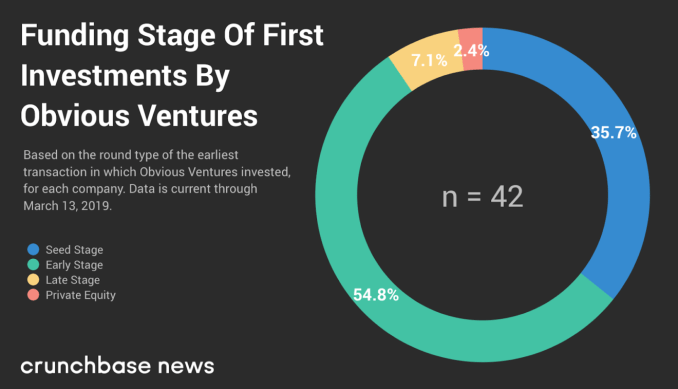 (Note that our chart above shows fewer than 50 companies because, according to Obvious, some of its portfolio companies “might be in stealth mode” or not disclosing their funding for another reason.)

Obvious claims it values diversity, noting that 20 percent of its current portfolio companies have female founders, according to Beebe.

“In our view, that represents where the world is going, as we think it’s becoming more diverse,” he said.

However, the firm doesn’t “make” its portfolio companies measure their positive impact in the world, although many do so anyway “as part of who they are.” For example, Beyond Meat on its website (in a section titled “our impact” no less) touts that its burgers use “99 percent less water, 93 percent less land, 90 percent fewer GHGE (greenhouse gas emissions), and 46 percent less energy.”

“We didn’t tell them they had to measure those things or hit those milestones, but that’s what they were going after and wanted to prove to the world,” Beebe said. 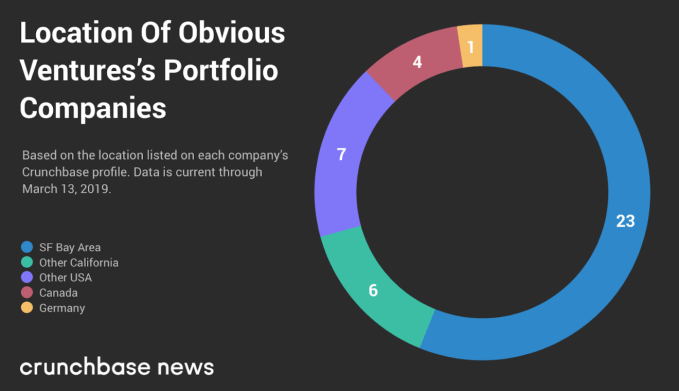 For his part, Diamond Foundry CEO R. Martin Roscheisen said his company’s goal is to create real diamonds above ground in its San Francisco foundry using a proprietary solar technology.

“We use renewable energy and are the world’s first and only diamond producer certified to be carbon neutral,” he said, adding the company is now producing more than 100,000 carats per year with the goal of expanding to 1 million carats per year.

Roscheisen said Obvious Ventures invested in his company “when they barely existed,” so for his company, it was more about the people.

I asked him to confirm if his company’s mission matched Obvious’ stated desire to only invest in companies “where every dollar of revenue was also delivering some environmental or social impact.”

“Yes, this is true for us,” he said. “We create diamonds without social and environmental harm…. But we’re also growing as fast as the fastest growing companies in Silicon Valley and have even been profitable.”

Meanwhile, I thought it would be interesting to get the perspective of a traditional impact investor on whether he considers Obvious to be an impact venture firm.

Dan Graham, co-founder of Austin-based Notley Ventures, has co-invested alongside Obvious Ventures. He believes there are two pillars of impact investors: those that want to improve the world through business but are looking for “great returns” at the same time, and those that are OK with lower returns and are almost viewed more as philanthropy.

Obvious Ventures, in his view, falls into the first category.

“They’re looking for those home runs that will return very nicely for their investors but are also having a positive impact,” he told Crunchbase News. Obvious might be hesitant to be lumped into the impact category because it doesn’t want to scare away capital that is looking for great returns, or portray itself as being willing to take a below market return, Graham said.

“But if you look at their mission and all the companies in their portfolio, I’d definitely describe them as impact,” he added.

So does it really matter how Obvious Ventures (or any other company) identifies itself? Marketing gurus certainly have opinions on that, but we aren’t here to make that call. What we do know for certain, because we report on it day in and day out, is that whether a company survives or dies ultimately comes down to sound business metrics, and that is something we can measure.