Design and engineering are two sides of the same coin when it comes to building software and hardware, and yet — unlike engineers, who can use services like GitHub, Bitbucket, GitLab or many others to help manage their development process — it has traditionally been slim pickings for designers when it comes to tools to manage the iterations and collaborations that are a part of their workflow.

Now, we are seeing a rising wave of startups responding to that vacuum in the market. In the latest development, Abstract, which has built a platform to help manage versioning and workflow for design projects, is announcing $30 million in funding led by Lightspeed Venture Partners with participation from previous investors Scale Venture Partners, Amplify Partners and Cowboy Ventures.

Abstract is not disclosing valuation, but I understand from sources that it is now $190 million, a decent leap from the $76 million valuation (according to PitchBook) it reached in its last round. Abstract has raised around $55 million since 2016.

This latest round, a Series C, comes at a time when we are seeing a number of other startups that are building tools for designers — some competing with Abstract, and some significantly larger — also raising big money.

In December, InVision (which has an ambition to be the “Salesforce of design”), raised $115 million at a $1.9 billion valuation. Last month, Figma (building both design development and collaboration tools) raised $40 million at a $440 million valuation. Last week, Sketch (which also makes design tools) raised its first outside round of $20 million after a long track record as a very popular bootstrapped startup.

Abstract fits very much in the middle of this spread. The problem that it has identified is that many designers still work in an inefficient way compared to their engineering counterparts (as well as those in other parts of an operation, including people who collaborate on creating documents or presentations). Designers still typically sling around multiple versions of the same file, or try to handle all passing around and working on one single file. That loose structure makes for many errors and lost changes, not to mention an inability to track who has done what and when. 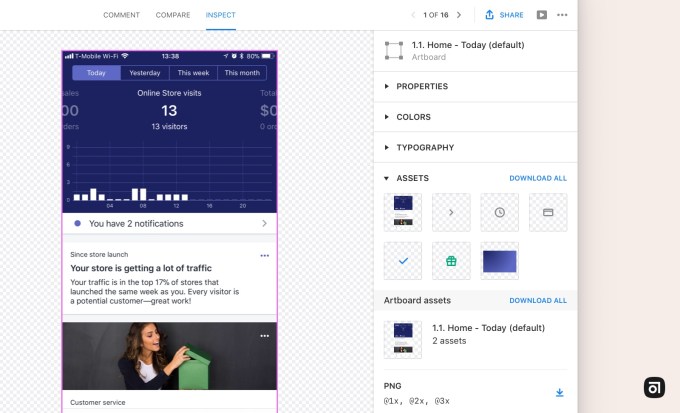 To address this, Abstract offers a number of features. First and foremost, it provides a way for designers to track versions of files — it automatically uploads the most recent copy even if you are working locally, so that whoever works next will use the most updated version. It also lets a project manager task different people with different parts of a project and manage the reviewing system. When a project is in progress or already completed, there is a way to present it and also gather feedback. And then, importantly, the design team can also use Abstract to interface with engineering teams that are building the tech underneath and around that design.

The funding is going to help Abstract expand that with more features, including a better and more streamlined way to export the most current files, as well as more security integrations for better control over who can access materials and when.

It started with a hashtag…

Abstract was co-founded by Josh Brewer and Kevin Smith — the former a designer, the latter an engineer who has also headed up design teams. Brewer, the CEO, said in an interview that his own past experience — his track record includes a period as Twitter’s principal designer — was the kindling that eventually led to the building of Abstract. One example he gave was the rebuild of Twitter back in 2011, which needed a redesign across web, mobile web, iOS and Android with a consistent navigation pattern, and new behavioral/usage patterns. (Not a small task.)

“We had only 12 designers at that time, a relatively small crew, but also a short timeline,” he recalled. “We decided to try to standardize on one tool to manage everything, but didn’t really have much to work with.” He and the team decided to “hack some of the tools we were using at the time,” which included Apache Subversion and GitHub for software development, “to solve the problem.” This helped him identify that there was a clear opportunity to build something that spoke specifically to designers’ needs.

That something has indeed started to find some traction: there are now more than 5,000 design teams using Abstract, with companies using it including Shopify, Cisco, Intuit, Spotify, Salesforce, Zappos and Instacart.

“As design becomes an increasingly significant competitive advantage, the tools designers use have to become more sophisticated, collaborative, and transparent to the broader organization. At Lightspeed, we invest in the sort of exceptional teams that are poised to transform a market,” said Nakul Mandan, who is also joining the board. “Josh, Kevin and the rest of the Abstract team have reimagined a design workflow that is quickly becoming the professional standard for how growing design teams work together and with functional stakeholders. We are excited to partner with Abstract to help the company continue its explosive growth.”

Abstract’s first efforts have been to support Sketch, the design tool that raised money just last week. The two are often associated with each other, it seems: many tend to use Abstract and Sketch together as an alternative to using Figma. But in addition to adding more versioning tools, the plan will be to add more design software to the list Abstract supports, starting with Adobe XD and Illustrator (it has currently opened early access waitlists for both). But even in the effort to be the go-to platform for all kinds of design projects, there are lines being drawn. It seems there are no plans, for example, to support Figma.

Another thing Abstract does not plan to do, Smith added, is to start building and offering many of those design tools itself.

“We are focused on expanding support for other file formats and bringing all your design files, whether it’s for a font or data to populate a design,” he said. There might be exceptions down the line, however: the company launched an SDK last fall, which Smith described as “our first step to exposing data to developers and design engineers, and that is part of our vision, which may or may not involve other kinds of tooling on the Abstract platform.”

He noted that “one of the things we’re been hearing about is the need for light-weight editing,” so that might be one area where Abstract might build or offer a third-party tool. “If we understand the data we are storing it’s not outside the realm of possibility to expose that. From a tooling perspective, it would be coming from the needs of our customers.”