Insta360, one of the pioneers in making 360-degree cameras, just raised $30 million in a Series C+ funding round from Chinese investors, including Everest Venture Capital, MG Holdings and Huajin Capital.

The Shenzhen-based camera maker declined to disclose its latest valuation. It plans to use the fresh proceeds in research and development, marketing and after-sales services in its key international markets, including the United States and Japan, which are the company’s second and third-largest markets behind China.

Some of its past backers include IDG Capital, Qiming Ventures, home appliance maker Suning Holdings Group and file-sharing service Xunlei.

The company started making 360-degree cameras — thus the brand name — in 2014 when founder Liu Jingkang saw a gap in the market for compact, easy-to-use cameras shooting high-definition 360-degree footage. Over the years it has evolved into a four-pronged business covering all sorts of needs: 360-degree cameras for professionals and amateur users creating virtual reality content, action cameras for sports lovers and smartphone accessories for average consumers.

In stark contrast to loss-making GoPro, which Insta360 rivals in the action camera vertical, the Chinese firm has been profitable since 2017 and is planning to file for an initial public offering in China next year, Liu told TechCrunch in an interview. The company declined to provide more details of the planned flotation but said the success of its action camera line has helped it achieve five-times revenue growth in two years and reach profitability.

From professionals to amateurs

Though the VR sector remains in its infant stage, Liu is optimistic that 360 content will become a much sought-after media form in the years to come.

“Many families will be consuming virtual reality content for entertainment in the future, so we have a huge market for 360 content. That’s why we make a 360 camera each year to keep our top-tier position,” said Liu. 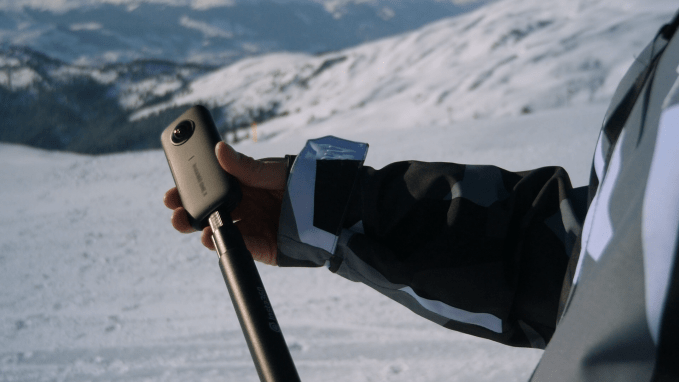 The action-camera market, by comparison, is more mature. Insta360 is riding a larger social trend of live blogging and short-form videos that has generated a huge demand for quality video content. Dozens of camera options, from Snap Spectacles to Tencent’s clone of the Snap glasses, are available to help people churn out content for video-sharing apps, but Liu saw problems in many of these products.

“[Video-shooting] spectacles, for examples, are quite offensive. Not everyone wants to wear them,” said the founder. “Many cameras do a bad job at video stabilization, so people end up with unusable footage. Lastly, and this is the key issue, users don’t know how to handle their footage.”

To that end, Insta360’s latest answer to documenting sports events and traveling is a camera that can easily be held by hand or slipped into a pocket. Called the One X, the gadget shoots in 5.7K resolution at 30 frames per second, delivering pleasingly smooth stabilization even when thrown around. The camera also comes with a software toolkit that automatically selects and stitches together users’ footage, which makes sharing to TikTok and Instagram a cinch. Check out TechCrunch’s review of One X below:

Insta360 has also been chasing after the masses, and its latest bid is an add-on lens that can instantly turn an iPhone into a 360-degree camera. The idea is that as users get a taste of the basic 360-degree experience, they may want to upgrade to a higher-end model.

“Insta360 has a rare ability to take cutting-edge imaging tech and put it into products that consumers want to use today,” said Gavin Li, senior director at Huajin Capital. “They’re moving faster and innovating more than their competitors, and they’re taking bold new approaches to the defining communication tool of our time: the camera.”