HP isn’t generally a brand most associate with being at the cutting edge of new technologies, but the company’s new HP Reverb is probably the best PC-powered consumer VR headset out there, when balancing price and feature set. It’s not only a big win for HP, but a big win for the Windows Mixed Reality (WMR) platform, which arrived with a bit of a thud, but now has a headset truly worthy of seriously competing with HTC and Oculus.

This thing looks A LOT like the Oculus Rift. Between the velcro straps, the on-ear headphones and the overall design, HP really cloned the Rift here, but made some key improvements along the way. The headset is even lighter and more comfortable. The built-in WMR inside-out tracking makes setup a snap (though it still only uses two cameras, which is probably the biggest shortcoming of the headset).

The big difference with what HP has built is that the displays on this thing are amazing.

Right now, VR users obsessed with achieving the highest available resolution would likely shoot for the Vive Pro or Samsung Odyssey+. HP’s Reverb reaches 2160 x 2160 resolution per eye, compared with 1440 x 1600 per eye on the Vive Pro and Samsung Odyssey+. The resolution on the original Rift, which was released three years ago, is 1080 x 1200. Unlike the resolution bumps on the other headsets, this one is instantly noticeable and makes for a far more comfortable experience.

The 114-degree field-of-view is also slightly wider than most of what’s out there now, though far more confined than the ambitious but somewhat hack-y Pimax headsets; this comes at the expense of stereoscopic overlap, meaning that objects outside the center of your view will appear less 3D — though it wasn’t something I really noticed, to be honest.

The headset is more expensive than the Rift, at $599 for the consumer version and $649 for the enterprise edition, but even at a healthy premium to some of the other headsets, the Reverb (which comes with two WMR controllers) does a great job justifying its price. 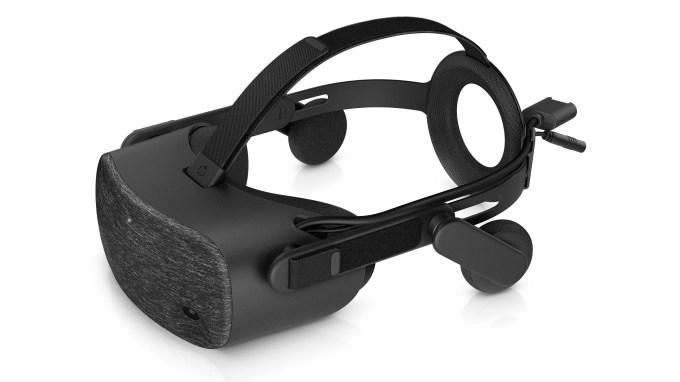 While the first batch of Windows Mixed Reality headsets offered little differentiation from each other aside from small cosmetic deviations from Microsoft’s reference design — HP launched a headset then, it was nothing special — now it seems the company has made a significant bet on becoming the premium option for virtual reality enterprise users.

This all comes as Oculus is preparing to release a PC-powered VR headset that makes some sacrifices for the sake of greater affordability and ease of use. With Oculus ceding the high-end market and HTC more focused on enterprise customers, this gives HP their best available change by selling a headset to cement themselves as the most high-end, yet still approachable experience for enterprise and consumers.

I’ll have to spend some more time with the device, but I really like what HP has done with the Reverb so far. It seems to strike the best balance for enterprise customers (who might not want to spend $6,000 on the excellent  Varjo VR-1).

This is the best VR headset I’ve ever demoed