Facebook has only just recovered from one of its worst outages to date, and Gmail and Google Drive also experienced a worldwide outage this week. Now, apparently, it was Apple’s turn. The company’s system status dashboard was blanketed in yellow warning notes for more than four hours Thursday, indicating mass outages of its iCloud service.

The page didn’t offer much in terms of detail as to why the services experienced problems, only saying that “some users are affected” and “users may be unable to access this service.” Apple didn’t say what caused the outage once iCloud recovered. 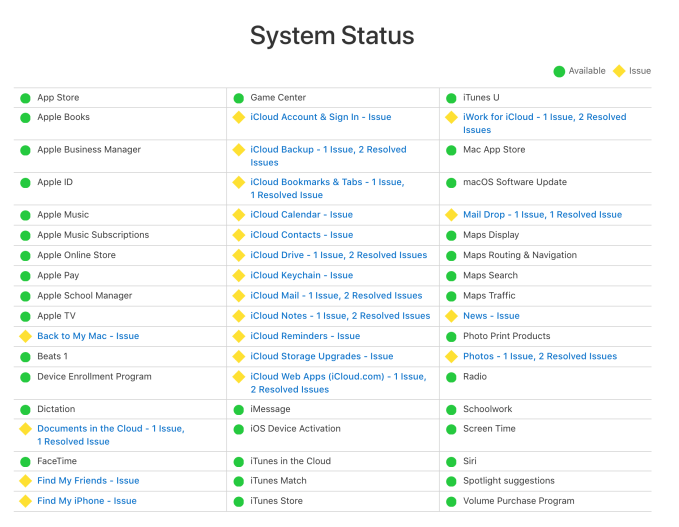 Apple’s iCloud issues arrive on the heels of Facebook’s massive outage, which impacted its 2.3 billion users across its properties — including Facebook, Instagram, WhatsApp and Messenger — for more than a day, becoming the site’s largest-ever outage. The social networking company chalked up the problem to a “server configuration change,” not a cyberattack as some had been speculating.

That hasn’t stopped people from continuing to believe the series of outages seen this week are related. But it’s simply too soon to draw any conclusions. There’s not enough being provided by the companies themselves to fully understand the nature of what’s happened, nor what caused the issues with iCloud.

Fair to say, it has been a bad week for the internet. (Did anyone try turning it off and back on again?)

Updated once the outage had resolved. h/t: MacRumors & AppleInsider