Drones are useful in countless ways, but that usefulness is often limited by the time they can stay in the air. Shouldn’t drones be able to take a load off too? With these special claws attached, they can perch or hang with ease, conserving battery power and vastly extending their flight time.

The claws, created by a highly multinational team of researchers I’ll list at the end, are inspired by birds and bats. The team noted that many flying animals have specially adapted feet or claws suited to attaching the creature to its favored surface. Sometimes they sit, sometimes they hang, sometimes they just kind of lean on it and don’t have to flap as hard.

As the researchers write:

In all of these cases, some suitably shaped part of the animal’s foot interacts with a structure in the environment and facilitates that less lift needs to be generated or that power flight can be completely suspended. Our goal is to use the same concept, which is commonly referred to as “perching,” for UAVs [unmanned aerial vehicles].

We designed a modularized and actuated landing gear framework for rotary-wing UAVs consisting of an actuated gripper module and a set of contact modules that are mounted on the gripper’s fingers.

This modularization substantially increased the range of possible structures that can be exploited for perching and resting as compared with avian-inspired grippers.

Instead of trying to build one complex mechanism, like a pair of articulating feet, the team gave the drones a set of specially shaped 3D-printed static modules and one big gripper.

The drone surveys its surroundings using lidar or some other depth-aware sensor. This lets it characterize surfaces nearby and match those to a library of examples that it knows it can rest on. 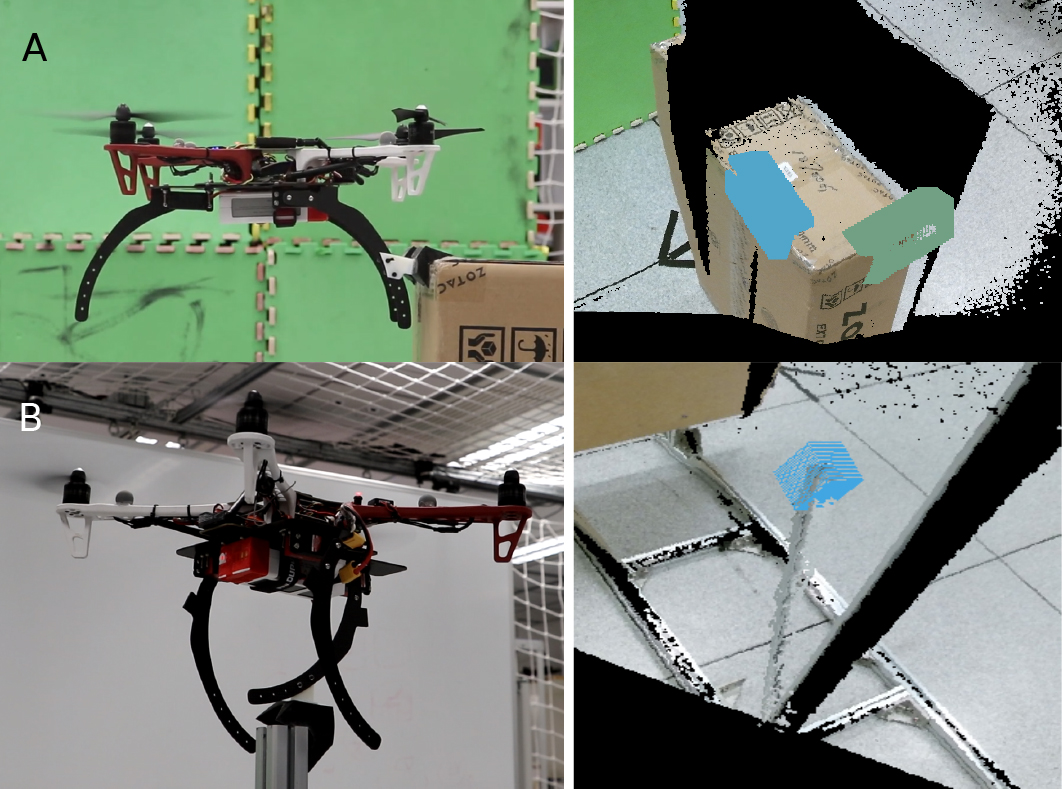 Squared-off edges like those on the top right can be rested on as in A, while a pole can be balanced on as in B

If the drone sees and needs to rest on a pole, it can grab it from above. If it’s a horizontal bar, it can grip it and hang below, flipping up again when necessary. If it’s a ledge, it can use a little cutout to steady itself against the corner, letting it shut off some or all its motors. These modules can easily be swapped out or modified depending on the mission.

I have to say the whole thing actually seems to work remarkably well for a prototype. The hard part appears to be the recognition of useful surfaces and the precise positioning required to land on them properly. But it’s useful enough — in professional and military applications especially, one suspects — that it seems likely to be a common feature in a few years.

The paper describing this system was published in the journal Science Robotics. I don’t want to leave anyone out, so it’s by: Kaiyu Hang, Ximin Lyu, Haoran Song, Johannes A. Stork , Aaron M. Dollar, Danica Kragic and Fu Zhang, from Yale, the Hong Kong University of Science and Technology, the University of Hong Kong, and the KTH Royal Institute of Technology.