Everyone and their dog seems to have an email newsletter today, but what happens if and when yours takes off? Some have gone down the paid route, but another credible alternative is to turn it into a subscription media business.

That’s a route that The Juggernaut, a new pay-to-play publication targeted at the South Asian diaspora, is going down now.

The company is part of the current Y Combinator cohort and is looking to make a mark by giving a voice (and insight) to the South Asia diaspora without relying on advertising.

There are already a collection of member-based media services that go after the tech audience — think The Information, Stratechery, The Ken in India… even TechCrunch’s own Extra Crunch — from which The Juggernaut is drawing inspiration, but its play is more akin to The Athletic, the sports-focused publication that graduated the YC program nearly three years ago.

“Our goal is to tell the untold stories of the South Asian diaspora,” founder Snigdha Sur, an American of Indian parentage who is based in New York, told TechCrunch in an interview. “When China came on to the world stage, everyone wanted to get smart about China, but now there are many in the diaspora who are looking to get more smart about South Asia. We’re second- or third-generation Americans trying to find our voices.”

A subscription to the Juggernaut costs $4.99 per month, with a discounted $3.99 option for those who commit to a year. Students are eligible for a $2.49 rate.

Here’s the mission courtesy of an FAQ for the publication:

Because South Asians are juggernauts. We’re an unstoppable force. People are getting off Facebook, and yet, whole groups dedicated to South Asian memes and other South Asian communities are booming. There has been a rise in South Asian-led brands. And we’re taking a cue from other targeted media companies: The Athletic with sports, Blavity for black millennials, and The Infatuation for restaurants. South Asians deserve the same sort of representation. 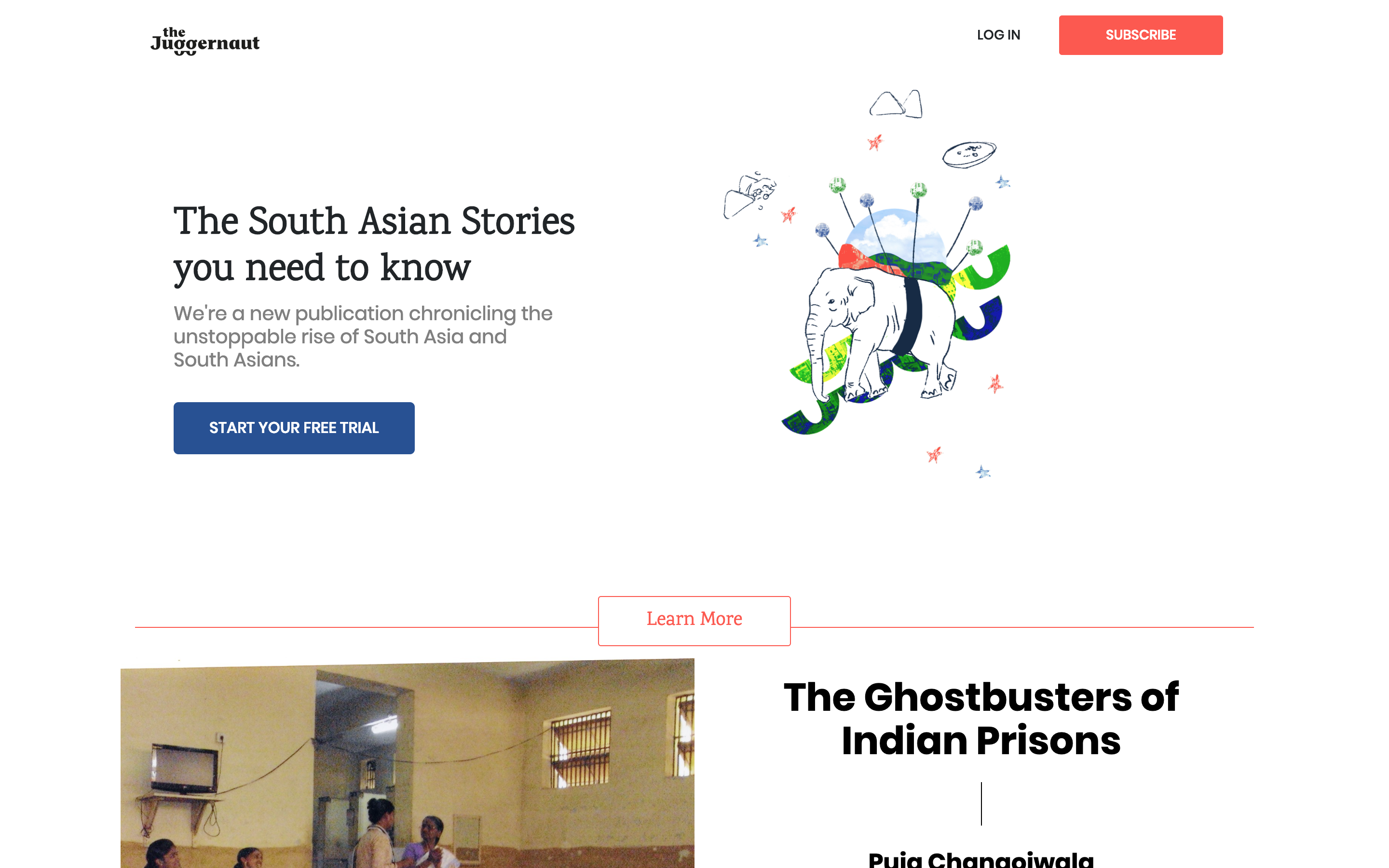 Sur’s journey into media, and The Juggernaut, started with her InkMango newsletter last September. After racking up “thousands” of subscribers in a few months, she decided there was enough potential in her storytelling niche to expand into a full-blown publication. The newsletter remains and it is free.

The focus is initially on culture, with the primary audience U.S.-based readers with a connection to South Asia; however, that’s likely to expand as the publication grows, Sur said.

A graduate of Yale (undergraduate) and Havard (masters), Sur spent time in India in 2014 and 2015 when, among many things, she worked as a third-party consultant to BuzzFeed and India-focused media companies Scroll.in and Spuul. That experience, she said, taught her that “people were looking at content and media in India, having previously said it wasn’t monetizable.”

After returning and spending a year with McKinsey in New York, she jumped back into media by starting The Juggernaut in October 2018. The publication went online proper in February of this year.

Like The Ken — which TechCrunch has written about a number of times — The Juggernaut produces one story per day and it uses a team of freelance reports to do so. There’s no immediate plan to expand that editorial flow, but Sur plans to use funds raised from YC — and its famous demo day — to bring writers on full-time.

“We want to hire another editor to expand and that might mean that we expand that output, but we still believe that content can be overwhelming so we’re not actively trying to do that. We’re trying to tell untold stories, and that could be many mediums, so we’re figuring out other formats we should be in,” she explained.

You can find out more about The Juggernaut at its website (here). The publication offers a one-week free trial, although that does require credit/debit card details upfront.